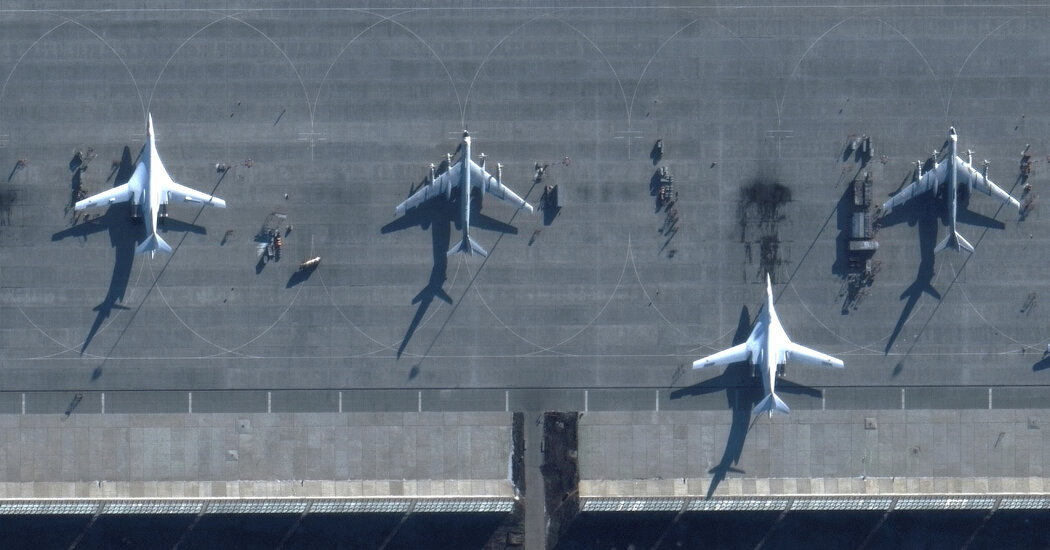 The naval harbor of Sevastopol in occupied Crimea, home to Russia’s Black Sea Fleet, was rocked by a series of mysterious explosions on Oct. 29. Footage of sleek, black maritime drones maneuvering around the bay targeting Russian warships soon emerged. Ukraine has still not acknowledged being behind the attack, but President Volodymyr Zelensky, while still not claiming credit, announced a fund-raising campaign to secure “a fleet of marine drones.”

Only a few hours after the explosions in Russia on Monday, Ukrainian officials said that more than a dozen Russian bombers had taken off from the Engels-2 air base. Air-raid alarms sounded in Kyiv, the capital, and other cities. Ukraine’s Air Force said more than 70 missiles were fired and more than 60 shot down.

“Unfortunately, we still cannot ensure complete security to our sky — there were several hits,” Mr. Zelensky said in his nightly video address. “Unfortunately, there are victims. As of this time, there are four people killed by Russian strikes today.”

Amid the volley of attacks, the remains of a missile were discovered on the territory of Moldova, to the west of Ukraine, the Moldovan Foreign Ministry said in a statement on its Facebook page. The country’s government has protested Russia’s firing missiles through its airspace to reach Ukraine.

The Moldovan government did not say when the missile, found in a snowy orchard in Briceni, a small town near the frontier with Ukraine, had crashed there, or whether it had been fired by Russia or Ukraine.

Last month, a Ukrainian air defense missile, fired against a Russian barrage, landed in Poland, killing two people. Such examples of violence spilling beyond Ukraine’s borders raise the specter of the war widening, which the Western alliance is keen to avoid.