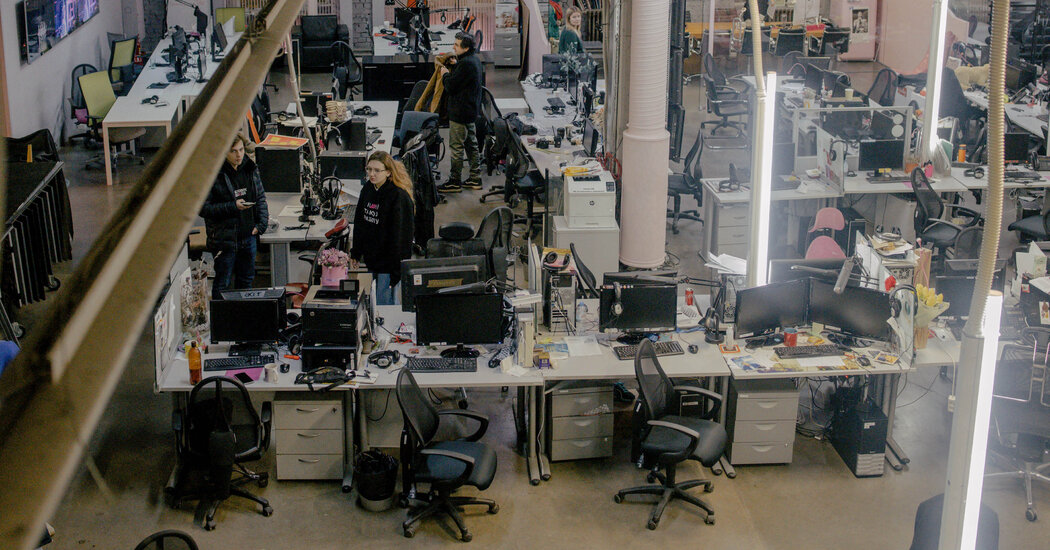 The outbreak of the Ukraine war left journalists at Russia’s most prominent independent television channel with a stark choice: risk arrest because of a new government ban on their work, stop reporting or leave the country.

And so journalists at the station, TV Rain, joined hundreds of Russian peers in exile. Eventually, they settled in neighboring Latvia, where they continued to counter the Kremlin’s propaganda and denounce its aggression to millions of viewers back home.

Now, though, a correspondent’s unscripted call to provide unspecified aid to Russian soldiers has engulfed TV Rain in perhaps the biggest crisis of its turbulent 12-year history, with Latvian and Ukrainian commentators accusing the station of supporting Russia’s war effort. The journalist lost his job, the Latvian media regulator has revoked the channel’s broadcasting license and a local security agency has begun investigating the station on suspicion of aiding a sanctioned state.

The controversy exposes how Russian political exiles are struggling to find a role in the conflict unleashed by their nation, particularly in Eastern European states like Latvia, which were once controlled by Moscow. In these countries, support for Ukraine is partly driven by fears of Russian aggression and suspicion of their own ethnic Russian minorities, and plays out against a historical backdrop of hardships endured under the Soviet Union.

“The team left Russia to continue showing the reality of Russia’s war to Russian people,” said Vera Krichevskaya, a TV Rain co-founder based in London. “But we are left without a territory. We have no rights in Russia and we have no rights in Europe.”

The controversy began after Thursday’s live evening news show, when a well-known TV Rain correspondent, Aleksey Korostelev, asked viewers to send information on conscripted Russian soldiers to a tip line that the channel had established months earlier to publicize the irregularities in the mobilization effort.

“We hope that we were able to help many servicemen, among others, with equipment or just elementary amenities at the front,” he added.

The response was swift.

“When ‘good Russians’ are helping ‘bad Russians’ — can the world understand finally that they are all the same?” wrote Ukraine’s culture minister, Oleksandr Tkachenko.

The government of Latvia, which already had a tense relation with exiled Russian journalists, on Tuesday announced that it was revoking TV Rain’s broadcasting license because of unspecified “threats to national security.” Last week, the Latvian authorities fined the channel 10,000 euros, about $10,500, for having previously used a map that placed Crimea in Russia and for having referred to the Russian military as “our army.”

“The TV Rain drama has shown many anti-Putin émigrés that there’s no freedom there,” a former Kremlin adviser, Sergey Markov, wrote on Telegram.

To try to contain the damage, TV Rain fired Mr. Korostelev hours after his comment, adding that the company never had and never would provide aid to any military.

In a Telegram post on Friday, Mr. Korostelev accepted the management decision and apologized for his comment, which he said was taken out of context.

But the backlash has continued. Mr. Korostelev’s comment may well make the channel’s presence in Latvia untenable, and destroy a year of painstaking efforts to build trust with Ukrainians, said Ms. Krichevskaya, the TV Rain co-founder.

TV Rain has 3.7 million subscribers on YouTube. Around 18 to 22 million unique visitors view its YouTube channel alone every month, with up to 80 percent of them from inside Russia, said Tikhon Dzyadko, the station’s editor in chief. It also has a cable channel in five countries with large Russian-speaking populations.

The loss of the license has cost TV Rain its access to the Latvian cable network, Ms. Krichevskaya said. However, she added that TV Rain would continue streaming on social media until it obtains a new license.

One topic that has strongly resonated with viewers is President Vladimir V. Putin’s decision to mobilize at least 300,000 Russian men to replace his military losses in Ukraine. That decision has confronted millions of Russians with the reality of the war, which many had previously ignored or downplayed.

Since the start of the mobilization in September, TV Rain’s audience grew fivefold, Ms. Krichevskaya said, pointing out that the silence on state TV caused Russians to flock to TV Rain to find out who was being called up and what awaited them at the front.

She added that by covering the mobilization, TV Rain could reach beyond opposition supporters to the apolitical majority of Russian people. As the channel focused its efforts on documenting mounting cases of draft irregularities, and the inhumane living conditions of the mobilized men, its journalists felt, she said, as if they had begun contributing toward their overarching professional goal: stopping the war.

In a telephone interview on Sunday, Mr. Korostelev, the correspondent, said that in his appeal he was trying to help conscripted Russian men by collecting information on the wrongdoings of authorities, and then documenting the cases. He was not soliciting matériel for them, he added.

He said the controversy had exposed a fundamental dilemma facing Russian journalists, and antiwar Russian exiles in general: How do they connect with compatriots back home without minimizing their country’s aggression?

“Ukrainians are undoubtedly the first and foremost victims of this war, but the suffering of Russians is also important,” said Mr. Korostelev, who left Russia after its invasion of Ukraine. “If they are dying in this war, then they are also its victims.”

He said he acknowledged the moral ambiguity of that position: Even moral support for Russian conscripts fighting an illegal war on occupied territory could indirectly contribute to Ukrainian deaths, he said.

Nevertheless, he said he would continue highlighting the injustices faced by ordinary Russians.

“I am a Russian citizen working for a Russian audience,” Mr. Korostelev said. “I will not assume a position that will turn me from a Russian journalist into a person who defends the interests of other people.”

Three TV Rain journalists have resigned in solidarity with Mr. Korostelev. And his supporters say portraying all Russian citizens as aggressors merely helps to perpetuate Mr. Putin’s rule by marginalizing his opponents.

“Aleksey was looking for new allies, was trying to destroy the walls of this ghetto into which the Kremlin is trying to corral the liberal opposition,” wrote Abbas Galiamov, a Russian political scientist, referring to Mr. Korostelev. Mr. Galiamov was a speechwriter for Mr. Putin, but has broken with the Russian president.

In the Baltic States, though, attempts to humanize Russian soldiers are particularly controversial. Many Russian ethnic minorities in those countries support the Kremlin in its claims of the unity of Russian people, and their ranks are being swelled by thousands of new Russian arrivals since the start the war.

But some Russian journalists in Latvia say stigmatization of any national group goes against the European Union’s fundamental values and tests the bloc’s commitment to support Russians fleeing political persecution.

Latvia’s media regulator did not respond to a request for comment.

TV Rain has run into other problems in Latvia, Ms. Krichevskaya said. Although its viewers are overwhelmingly Russian, the channel was fined by the Latvian authorities for not including Latvian subtitles in one program, which she said put more pressure on its already scarce financial resources.

A separate fine issued for TV Rain’s reference to Russia’s military as “our army” highlighted a more fundamental sticking point.

“To be accessible to Russian viewers, to be able to connect with them in a manner that they respond to, we have to speak to them as Russians,” Ms. Krichevskaya said. “We have to be able to say to them that our army is responsible for 40,000 atrocities.”

But the use of this phrase broke Latvia’s digital media law, creating, according to the government, by leaving the false impression that TV Rain may have been referring to the Latvian military.

Exiled Russian dissidents “cannot find the required message that will be simultaneously accepted in Europe, Ukraine and not alienate the Russian audience,” Maria Snegovaya, a Russian political scientist, wrote on Facebook. “Perhaps it is an unachievable task.”

“In the war you have to choose,” she added. “There’s no middle ground.”