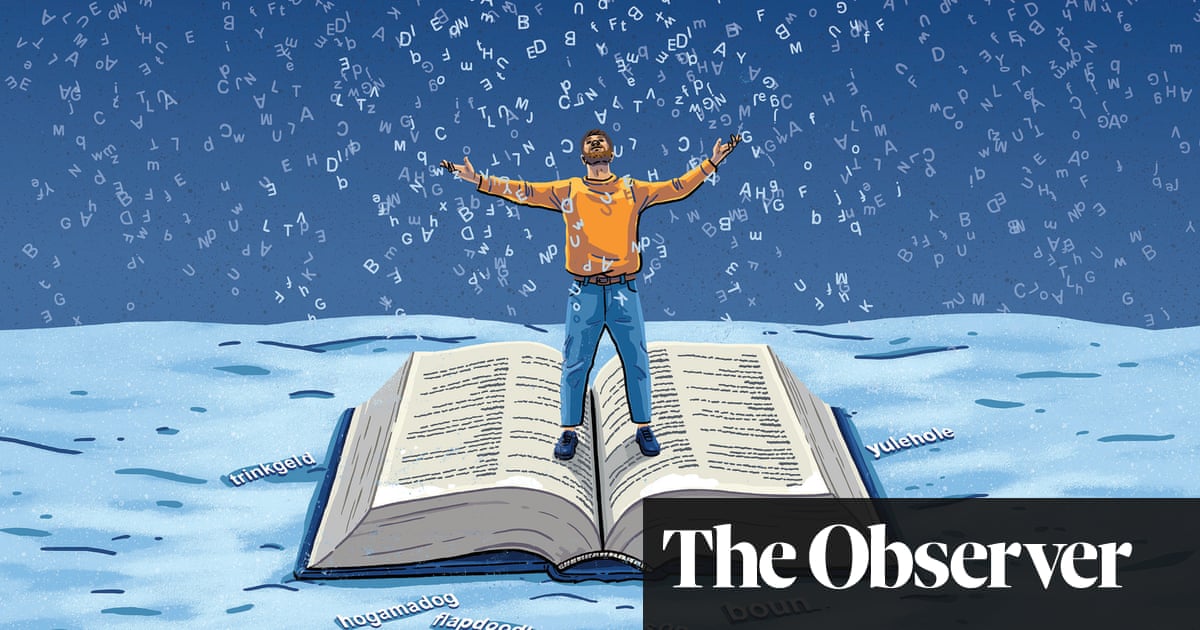 Christmas morning. I must have been about seven years old. My grandparents had just arrived at our house and my family’s presents were all being excitedly exchanged. At last, they came to me, and my grandmother handed over something that seemed absolutely enormous. It was broad, flat, solid and extraordinarily heavy. With little clue about what to expect, I tore it open and found myself holding a hardback illustrated children’s edition of the Oxford English Dictionary.

Most kids, I am sure, would have rolled their eyes. Enthusiasm would have been feigned and the book would have been subtly placed to one side in favour of a Nintendo Game Boy (or whatever the gift of choice was in the early 90s). But for me – nerdish, bookish, studious – this was, without doubt, a perfect gift.

It’s fair to say I became obsessed with it. For the next day or two I sat and read it, cover to cover, as you would a novel. I wrote down all the words I came across that I didn’t know, starred and highlighted all those I liked and made lists of all those that seemed truly bizarre to me in sound, shape or spelling. Incognito. Flummery. Hullaballoo. Canoodle.

I really have no idea why I became so immediately enamoured. But looking back, there’s no denying that the gift changed my life. A love of language had been sparked and over the years and decades that followed I took that interest and ran with it. From school to university, my love of language grew until eventually I found myself on a postgraduate linguistics course, studying the history and psychology of our language in more detail than ever before. It should have been unendingly fascinating – and yet I absolutely hated it.

Towards the end of my course, it struck me that there had been something joyless about it. Everything I had loved about language – about sharing my love of language – was gone. It felt as if all the most interesting aspects of it were being kept behind glass, like rare artefacts in a museum that no one visits any more. I wanted to tell everyone about everything I was learning and discovering, but, instead, here it was, locked away in rooms and classrooms that only those who already found language interesting would ever think to enter. It was stifling and infuriating. I completed my course, told my tutor I’d had enough (an interesting conversation, to say the least), and went back to waiting tables. “The most highly qualified waiter in Newcastle,” as my mates knew me.

It was a reset moment. I realised that what I truly enjoyed – and what I believed I excelled in – was taking what I had learned and repackaging it in such a way that anyone could appreciate it, and find our language and its origins as fascinating as I do. After all, just like art and sport and music, language is one of the few things found in every culture on the planet. I resolved to tap into that shared interest and open this wonderful subject up to everyone, regardless of their background or academic experience.

I read the dictionary cover to cover, as you would a novel

So I combined my two interests and began writing about words, their origins and language just for fun. A blog, a word-of-the-day Twitter account and a series of books all followed and now, a decade later, I’ve somehow engineered for myself the perfect career for that dictionary-devouring seven-year-old. I collect and read old dictionaries, post the most interesting words I find online and write about their histories and origins.

While looking up Christmas-themed words, for instance, I rediscovered an underappreciated favourite of mine – boun. Listed in the English Dialect Dictionary (EDD), to boun is to decorate a home with evergreen branches. It’s an unexpectedly ancient word. Boun in 14th-century Middle English meant to prepare or make ready (incidentally, it’s the origin of the word “bound” as in Outward Bound). But one of its later, more specific senses was to make ready by dressing or decorating, and it is from there that this more festive application of it appeared, sometime around the 1800s.

Look ever closer into the dustier corners of the dictionary and you’ll find even more forgotten gems. The EDD in particular is a festive goldmine. The ball of snow you use to start off a snowman – by rolling a smaller snowball through a snowfield, so it gradually becomes bigger and bigger – is called a hogamadog, for instance. In the sense of something increasing in size as it spirals outwards from a central core, that’s a word that began life as a local name for the shell of a snail.

The EDD also lists such eminently useful festive fayre as kirsmas-glass (a toast to a house given at Christmas), sonrock (a cosy fireside chair), fyole (a dusting of snow), whullup (to give a gift to someone in an attempt to curry favour with them) and bull week, the week leading up to Christmas Day, when workers had to tie up all their loose ends ahead of the holidays – and, according to tradition, were duly rewarded by their superiors with a whole roast bull. “To get the bull down,” ultimately, is to complete a last-minute rush of work ahead of the Christmas break. Fail to do that and you might end up a yuleshard – a corruption of “yule’s jade” (essentially a festive fool) – used of someone who leaves work, jobs or errands unfinished on Christmas Eve.

In more formal terms, the act of bestowing a gift on someone can be properly known as oblation. In 1940s slang, a toe-cover was an inexpensive but utterly pointless present. Money given in place of a gift has been known as present-silver since the 1300s. While money to be spent on drink can variously be known as pourboire (borrowed from the French in the 1700s), trinkgeld (from the German), or a propine.

After all the indulging, a swadge and a yulehole may well be needed

Spending too much money on food and drink is an act known as abligurition, according to one 18th-century dictionary – the result of which might be a feeling of barleyhood (a Tudor-period word for a hangover), or crapulence (defined by Samuel Johnson as “sickness by intemperance”). And after all that overindulgence you may well need to swadge (to relax after a large meal), and be in dire need of a yulehole – a term defined by the superb Scottish National Dictionary as “The hole in the waist-belt to which the buckle is adjusted to allow for repletion after the feasting at Christmas.” (Should you need it, the excellent Scots word pang, according to the same source, can be used to mean “to force an unwanted article on someone”. Ergo, it is the perfect word for Boxing Day, or for all the Bounty bars left in the bottom of your tub of Celebrations.)

Admittedly, there is an argument that such rare and forgotten words are rare and forgotten for a reason. As such, they should remain little more than curios, dangling on the very fringes of our language, while the rest of us communicate using more understandable and familiar terms. From a linguistic perspective, it’s true that dropping a word like boun or fyole or hogamadog into a casual chat with friends isn’t exactly going to make the conversation flow (and goes against the purpose of language as a tool for clear communication). But, equally, it’s worth arguing that if these words were better known, we would undeniably use them. They must once have had some currency to be in a dictionary, earning them a chance at being rescued from relative obscurity.

Obscure words aren’t just for Christmas, either. Imagine how much our discourse could be expanded with terms like flapdoodler (19th-century slang for a dissembling political speaker), roorback (a rumour circulated for political gain), adullamite (someone dissatisfied with the current political outlook) or grantism (political cronyism and nepotism, after President Grant awarded more than 30 of his friends and relatives high-profile positions in the early 1870s).

From my perspective, as a writer keen to expound my love of language, offering up a juicy linguistic morsel, like hogamadog, is a great way, too, of piquing a reader’s interest, and using it as a gateway to explain some wonderful etymological connection, or some complex linguistic phenomenon, that might otherwise be too dry or obscure to be appreciated out of context. It’s also just a great word, of course. Seven-year-old me would have loved it.

Why is This a Question? Everything about the Origins and Oddities of Language You Never Thought to Ask by Paul Anthony Jones (Elliott & Thompson, £14.99) is available for £13.04 at guardianbookshop.com