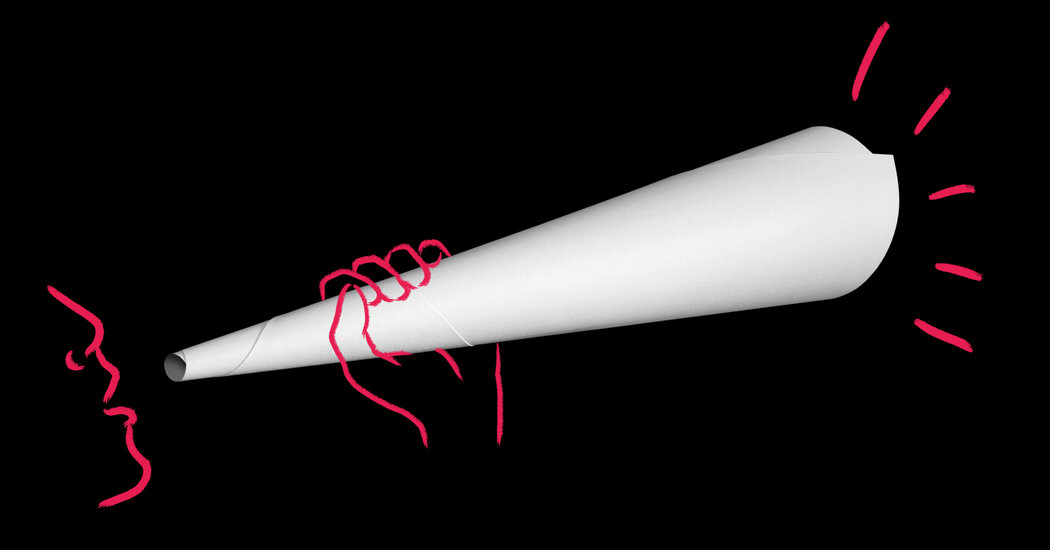 It is too early to tell whether the remarkable protests across China against the government’s strict “dynamic zero Covid” policy are a milestone in the country’s long history that will have lasting impact; they may signal growing discontent with Chinese leadership or a more limited expression of popular frustration. But it’s momentous all the same that thousands of Chinese people have raised their voices — and some, blank sheets of paper — to criticize their leaders’ policies in open view of police officers and the security apparatus, in the largest mass demonstrations since the 1989 pro-democracy protests in Tiananmen Square.

Many in China are exhausted by nearly three years of harsh lockdown rules and economic hardship, and the protesters are taking enormous risks to make themselves heard. Their bravery is a profound affirmation that freedom of expression, dissent and protest are values held by people all over the world. The United States and many other nations are watching to see if President Xi Jinping and the Communist Party’s leadership hear the protesters’ demands and find ways to implement an effective vaccination campaign that would make it possible to lift onerous Covid restrictions. The United States and other countries may have little ability to shape the course of events in China, but we have a moral obligation to offer expressions of support, dialogue and collaboration to its people.

Covid-19 has shattered the unspoken social contract between the Communist Party and its people: stability and prosperity, in exchange for a high degree of social control. Youth unemployment has approached 20 percent in China amid an economic slowdown linked, in large part, to the continuing lockdowns that sometimes require people to be literally locked into their apartment buildings. Stores, restaurants and movie theaters have shut down for months at a time. In much of China, daily life has become an ordeal that revolves around getting tested for Covid and waiting for an all-knowing smartphone app to give the green light to enter a store or ride a train. Travel abroad has become all but impossible.

Until now, most Chinese people have been exceedingly patient with these strict protocols; it was the sacrifice they made to avoid the high rates of sickness and death from Covid that devastated so many other countries. But over the last year, patience in China has worn thin. Gestures of appreciation for volunteers in hazmat suits have given way to barely concealed contempt for the neighborhood officials who come in the middle of the night to force residents into state-run quarantine centers while their neighbors are asleep and thus less likely to raise a fuss.

Part of the public anger stems from the fact that these measures no longer seem to work. The rise of the Omicron variant and other highly transmissible variants have made stamping out every case of the virus costly and futile. Locking down a city of over 200,000 because of a single case is no longer an effective way to fight Covid-19. Relatively low rates of vaccination among older people, paired with China’s insistence on using less effective, domestically manufactured vaccines, have left the country with little immunity.

The very policies that allowed China to roar back to life in 2020 and 2021, when most other countries remained largely closed, have now left China as the only major economy in the world that is still experiencing regular lockdowns. The zero Covid policy has become so intertwined with Mr. Xi’s rule that overzealous local officials have carried it out even when doing so makes little sense. A deadly apartment fire in a city that had been under lockdown for 100 days set off the current wave of protests, but frustration has been building for months. Viral posts about people who were prevented from leaving their homes despite an earthquake outraged the public. So did news of the death of a 3-year-old boy who had been poisoned by carbon monoxide during a lockdown but was initially prevented from being taken to the hospital because of Covid protocols.

The pandemic has laid bare the vulnerabilities of every society in the world, and China is no exception. Lynette Ong, the author of a new book on China’s communist system, “Outsourcing Repression: Everyday State Power in Contemporary China,” says the protests may be hastening the demise of a system that the Chinese Communist Party has relied on for years, using local party volunteers to implement government policies in their own neighborhoods. These volunteers have been empowered to enforce lockdowns and quarantines and have “had to increasingly deploy unreasonable and extreme measures to extract compliance from citizens, which invited further backlash,” she wrote in Foreign Policy magazine.

The World Cup also seems to have played a role in the public’s frustration. Some Chinese people described seeing maskless soccer fans on television as the moment they realized that much of the rest of the world has moved beyond Covid while China remains mired in the battle against it.

Shanghai, China’s most populous city, endured an epic lockdown this past spring. Residents of the city were reportedly told to prepare for four days in their apartments. In the end, they were holed up for more than 60. Some went hungry as food stocks ran out and government aid arrived absurdly late. In the meantime, people sang and screamed out their apartment windows to protest their confinement, only to be met by flying drones blaring orders through their windows. “Control your soul’s desire for freedom,” one drone told them.

Many expected Mr. Xi to announce changes to the zero Covid policy at the party congress in October, which cemented his status as China’s most powerful leader since Mao Zedong. Instead, Mr. Xi doubled down. While acknowledging that there were some missteps in the policy, he promoted a loyal ally who was responsible for Shanghai’s poorly executed lockdown and removed a senior party leader who had warned about the economic consequences of the zero Covid policy.

With the party still publicly defending the policy, some Chinese people have taken immense risks to fight it. Days before the 20th party congress, a lone protester unfurled banners on a bridge in Beijing that read: “We want to eat, not do coronavirus tests; reform, not the Cultural Revolution. We want freedom, not lockdowns; elections, not rulers. We want dignity, not lies. Be citizens, not enslaved people.” Some of the bravest protesters in the recent demonstrations echoed these slogans.

As The Times reported on Thursday, the Chinese government may finally be stepping away from the harshest measures in some places, and that news was welcomed by protesters. “We were all very happy last night,” one protester from Shanghai told The Times. “We started to picture how life would be after the whole country’s restrictions are loosened.”

China’s prosperity depends on being connected to the rest of the world. Mr. Xi’s meeting with President Biden in Bali last month underscored that fact. The Biden administration is wise to continue its efforts to keep lines of communication with senior Chinese officials open. This dialogue could be key to addressing public health challenges when China finally does open up more fully, as it eventually must do. Collaborations between scientists and public health officials in China and the United States were crucial in the earliest stages of the pandemic, and they could prove vital once again.

For now, the protesters in China have made their voices heard under very difficult conditions. They demonstrated the value of protest and dissent — freedoms that many in the world hold dear. At a time of geopolitical hostility, they offer an opportunity to Americans and others to better understand the diversity of views that exists within China and to see the Chinese people anew.