Toyota announced the development of a new Hilux prototype featuring a hydrogen fuel cell powertrain sourced from the second-gen Mirai. Toyota’s first FCEV pickup will be built in the UK in 2023, by a consortium of technical engineering partners, using funds from the UK Government.

The project is part of the Advanced Propulsion Center (APC), a government-led initiative for the development of zero-emission vehicles in the UK. The £11.3 million ($13.86) funding will cover the expenses of later-stage R&D, taking the product from the “proof of concept” to the “prototype” stage. 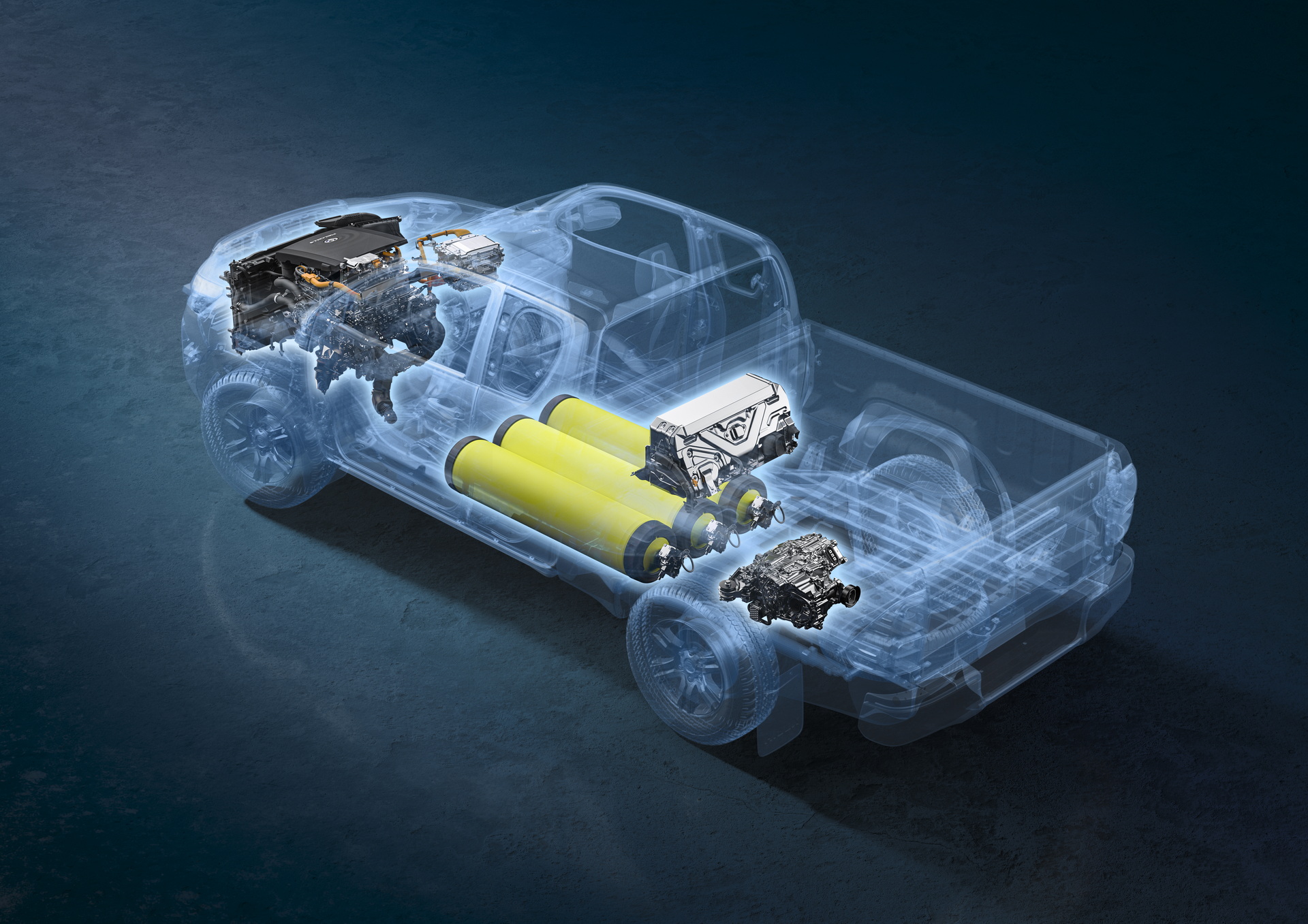 Using a Hilux as a base, the team will remove the diesel engine and drivetrain, replacing them with a much cleaner setup. Toyota’s second-gen FCEV system including the fuel cells, the electric motor, and the hydrogen tanks will be sourced from the Mirai, converting the Hilux into a zero-emission pickup. Interestingly this option was chosen over the experimental hydrogen-fueled three-cylinder combustion engine found on Yaris and Corolla prototypes.

Toyota didn’t announce the specifications of the Hilux H2, but the in the Mirai the powertrain produces 182 hp (136 kW / 185 PS) and 300 Nm (220 lb-ft) of torque, emitting water from its tailpipe. For comparison, the 2.8-liter four-cylinder turbodiesel engine in the regular Hilux produces 201 hp (150 kW / 204 PS) and 368 lb-ft (500 Nm) of torque. We also expect the Hilux H2 to offer AWD, unlike the Mirai which is RWD-only. As for the driving range from the three hydrogen tanks, it will most likely be lower than the 402 miles (647 km) of the Mirai due to the much worse aerodynamics and the increased weight of the pickup.

For the realization of the Hilux H2, Toyota Motor Manufacturing will work with other UK-based firms with the help of a Toyota Motor Europe R&D team. Engineering firm Ricardo will support the technical integration of the fuel cell components to the ladder-frame chassis of the pickup, ETL will assist in thermal management solutions, D2H will offer engineering services in thermodynamics, and Thatcham Research will work on crash safety and insurance ratings.

The Toyota Hilux H2 prototypes will be built at the Burnaston plant in 2023. According to Toyota, the goal is “to prepare for small series production” and “investigate an additional application of the fuel cell technology in a vehicle segment that is key to a number of industry groups and will help support the sector’s move towards decarbonization”.

The current eighth-generation Toyota Hilux is in its twilight years having debuted back in 2015, with two subsequent facelifts in 2017 and in 2020. The next generation of the popular pickup will likely bring some sort of electrification into the mix, although an FCEV model sounds unlikely for mass production due to the limitations in the hydrogen refueling network. Still, working prototypes of the Hilux H2 sound really cool and could provide useful insights for the future. Most importantly, the project will allow the involved parties to develop their expertise in FCEV technology and vehicle conversion.