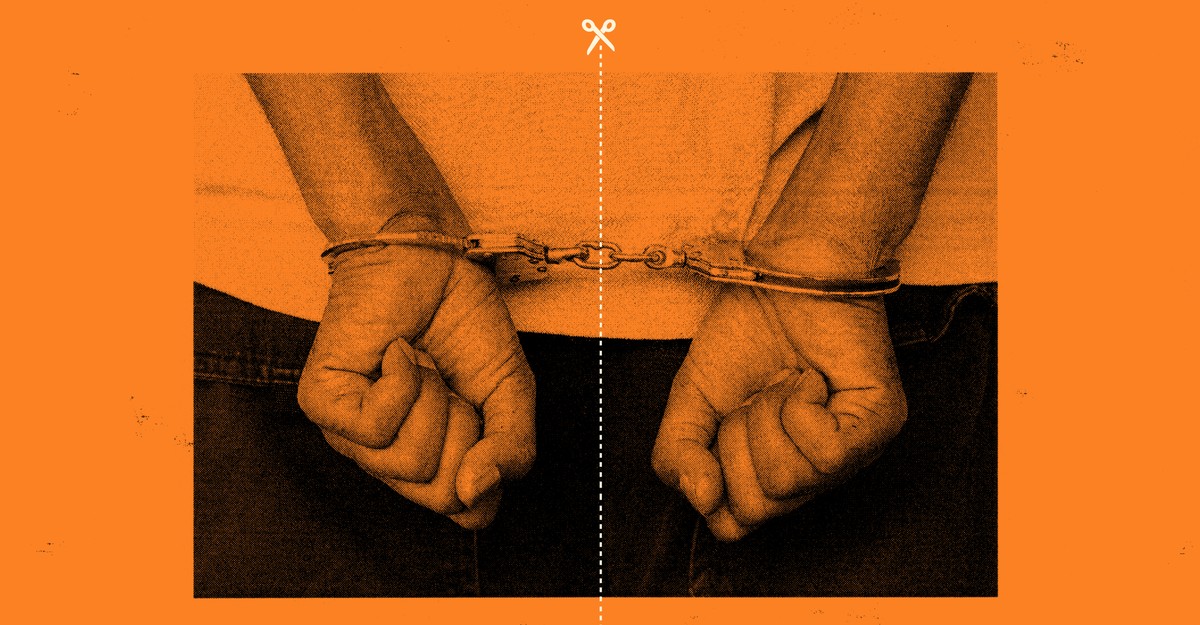 Adnan Syed spent more than two decades in prison before a judge, in September, vacated his murder conviction. The next month, the state’s attorney for Baltimore City told journalists that Syed had been “wrongly convicted” and dropped charges against him. Justice moved slowly in his case: Only recently did an investigation uncover that prosecutors in his trial might have failed to hand over relevant evidence to the defense, and new DNA testing found no traces of Syed on the murder victim’s clothes. Those revelations came years after the popular podcast Serial raised consequential questions about his conviction, which seems to have been a major factor leading to his release from prison. That Syed’s fate followed from his good fortune—attracting the attention of a journalist with a national audience—should not give us faith in our legal system’s ability to sort the innocent from the guilty. Luck is an unreliable defense, but it is often the only hope for falsely accused people. The government has no general obligation to search for truth or, more particularly, exonerating evidence, even though the fate of an innocent person may hinge on whether it is discovered.

What if the whole system were inverted? What if, instead of trying to find incriminating evidence, law-enforcement officials were responsible for trying to prove innocence, at least when accused people can point to evidence that, if produced, will lead to their exoneration? The current legal system has an inherent—and unjust—irony: A presumption of innocence, intended to protect people from false convictions, results in America’s law-enforcement apparatus spending virtually all of its time and resources trying to find evidence to overcome that presumption and prove that a suspect is guilty.

This is why I believe that the legal system should offer defendants what I call the “plea of innocence,” a formal plea that would require prosecutors to search for exonerating evidence in the same way they already team up with investigators to look for inculpatory evidence. With a new formal, legal norm, the public could hold elected district attorneys and appointed federal prosecutors accountable not only for the number of people they help convict but also for the number of innocent people they help free. Someone who pleads innocent must agree to speak with investigators and identify plausibly exonerating facts. The defense lawyer must also affirm a belief in innocence, a requirement that would work to prevent guilty people from asserting a false claim. Such mechanisms would stress the importance of discovering the truth of what happened in a particular incident, rather than being satisfied with proof beyond reasonable doubt. Recalibrating the system would mean that resources would flow toward accused people who can make plausible claims of innocence.

From the November 2022 issue: This is not justice

Defendants who cannot identify exonerating evidence would simply plead not guilty, as everyone must plead now. Claims that they might appear guilty to a jury because they could not plead innocent is no reason to deny a new avenue of exoneration. In the 1981 case Carter v. Kentucky, the Supreme Court held that a defendant who chooses not to testify may require the trial judge to inform the jury that it is to draw no adverse inference, such as guilt, from a defendant’s silence. Defendants who plead not guilty, instead of innocent, would be entitled to a similar jury instruction.

The plea for innocence is crucial to the pursuit of justice because possibly 70 to 100 million Americans have “some type of criminal record,” according to an estimate by the Sentencing Project. But the National Registry of Exonerations has identified only 3,299 exonerations in the U.S. since 1989. The large number of convictions and small number of exonerations indicate either that the legal system produces generally accurate results or that it is unable to identify more than a nominal number of innocent people.

Probably the most reliable study on the rate of innocent-person convictions estimated that 4.1 percent of the defendants sentenced to death (a total of 7,482) from 1973 to 2004 were innocent. Other kinds of cases probably see a higher innocent-person-conviction rate because, as the researchers concluded, society provides more resources, including additional lawyers and a more extensive right to appeal, in capital cases than in any other kind of case and is therefore more likely to find innocent people on death row.

Consider the case of Andrew Grantt Conlyn, who faced as many as 15 years in prison. In March 2017, Conlyn was in a 1997 Ford Mustang with his friend, who was intoxicated and speeding down a Florida road. The car hit a curb and spun wildly out of control, killing the driver and injuring Conlyn. A tattooed man pulled Conlyn from the wreckage through the driver’s door and then disappeared into the night. This lifesaving measure became an incriminating act when doing so left Conlyn’s blood on the driver’s-side airbag. In 2019, he was charged with vehicular homicide for causing the death of his friend, based on the prosecution’s claim that Conlyn was actually the one driving the car.

Even though the police didn’t obtain the contact information or name of the tattooed man when they spoke with him after the accident, his image was captured by their body cameras. In an effort to clear Conlyn’s name, defense attorneys spent extensive time attempting to identify the tattooed man. They distributed his image to news outlets and placed it on social media. They scanned the internet for local tattoo parlors and searched the streets and motor-vehicle records for a black pickup truck like the one spotted near the scene of the accident. Finally, a facial-recognition company agreed to let a defense attorney use its software to track down the witness. The attorney told The New York Times that he found a match within seconds. The man backed up Conlyn’s story, and prosecutors dropped the case.

Why was the burden on the defense and Conlyn—who made little money and asked the court to declare him indigent so the state of Florida could help pay his legal fees—to find exculpatory evidence? The recurring irony is that, in the current system, there are procedures that lead to the exclusion of evidence incriminating guilty people (because the police acted improperly), but there are no procedures that incentivize the police or prosecution to look for exonerating evidence. The failure to look for exonerating evidence is an error of omission and can be as harmful to society as an error of commission, in which the police search a home without a warrant to find the gun that the resident used in a crime.

From the September 2017 issue: Innocence is irrelevant

Under these conditions, where procedures substitute for truth, all innocent people need help. Although prosecutors may not ethically bring charges against someone unless they have probable cause, they have no responsibility to help accused people prove their innocence. If a plea of innocence existed, accused people would have the right to insist that the government help them in their search for potentially exonerating evidence.

This would be a major shift from our current legal system, which inhibits defense lawyers from prioritizing a search for truth. Constantly combative, defense lawyers learn to deploy every procedural artifice, but they do not learn how to factually establish the truth, or even contemplate doing so. In a 2010 law-review article, the law professor and former public defender Robert P. Mosteller made the dangers of considering innocence clear. “Defenders who search among their clients for those who are innocent are inviting personal and professional destruction,” he wrote, adding: “To let special care about innocence matter in representing clients would be to deny a full defense to the innocent who lack either readily available objective proof or a compelling persona.” This approach is emblematic of a legal system satisfied with ensuring compliance with procedures and uncomfortable with contemplating innocence.

Unfortunately, the human errors that contribute to innocent-person convictions appear to be intractable. They were first identified 90 years ago in the book Convicting the Innocent by the late Yale law professor Edwin Borchard. He outlined the causes of false convictions: mistaken identifications, false confessions, lying witnesses, misconduct and errors of police and prosecutors, errors of defense lawyers, and the unreliability of certain forensic evidence.

Procedural protections, advanced forensic sciences, and DNA testing cannot prevent such inevitable error, which looms over every case. For example, the Innocence Project, which focuses on exonerations through DNA testing, reports that about 11 percent of exonerations are of defendants who had pleaded guilty, probably to avoid a harsher sentence if they had gone to trial and a jury had found them guilty. With no dispositive scientific evidence or methods to search for exonerating facts, innocent people understandably enter false pleas and become casualties of a legal system that is unwilling to help them search for truth.

We tend to believe that due process is a reliable or unique remedy. “Our dangers do not lie in too little tenderness to the accused,” Learned Hand, one of the most respected federal judges of his era, wrote in 1923. “Our procedure has been always haunted by the ghost of the innocent man convicted. It is an unreal dream.” More than eight decades later, Justice Antonin Scalia echoed Hand’s claim. Citing a local prosecutor’s estimate of a .027 percent false-conviction rate, he wrote, “With regard to the punishment of death in the current American system, that possibility [of executing an innocent person] has been reduced to an insignificant minimum.”

Carissa Byrne Hessick: The constitutional right we have bargained away

The near infallibility that Scalia and Hand ascribed to legal procedures leads to an ethos in which truth is no longer a meaningful aspiration. In 2009, Scalia and Justice Clarence Thomas dissented in the case In re Davis. They opposed a hearing for a death-row inmate who alleged that several of the witnesses who had identified him as the killer disavowed their trial testimony. “This Court has never held that the Constitution forbids the execution of a convicted defendant who has had a full and fair trial but is later able to convince a habeas court that he is ‘actually’ innocent,” Scalia wrote. A federal court is not permitted to reverse a state jury’s apparently erroneous guilty verdict if it cannot find a procedural error, so Scalia’s pithy summary remains a correct statement of the law.

America’s confidence in procedures is misplaced. Without a plea of innocence, prosecutors have no obligation to search for exonerating evidence, and we will continue to have a system that produces relatively few exonerations through luck––a podcast, perhaps––when innocent people would be better served through a search for truth.