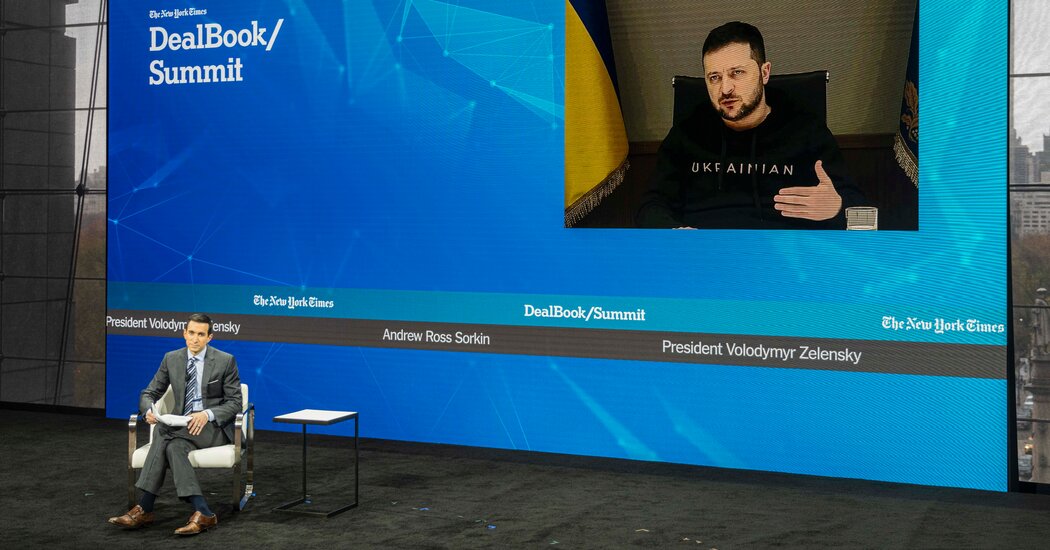 President Volodymyr Zelensky of Ukraine on Wednesday invited Elon Musk to visit Ukraine to see the damage done to the country by Russian forces, saying that such a visit could help the billionaire understand the situation before making pronouncements about it. He also said he didn’t think there was any immediate threat that Vladimir Putin, president of Russia, would use nuclear weapons as the war enters a new phase of winter combat.

Mr. Zelensky’s comments, made via video link to The New York Times’ DealBook Summit, were an implicit rebuke of Mr. Musk, the entrepreneur who last month proposed a peace plan for Ukraine that included ceding territory to Russia.

“If you want to understand what Russia has done here, come to Ukraine and you will see this with your own eyes,” Mr. Zelensky said. “After that, you will tell us how to end this war, who started and when we can end it.”

SpaceX, which Mr. Musk owns, funds the operation of the Starlink internet service in Ukraine, where it has become a digital lifeline for soldiers and civilians amid Russian attacks on the country’s energy infrastructure.

Mr. Musk backed off a threat in October to withdraw funding for the service in Ukraine. “The hell with it,” he wrote on Twitter. He added that “even though Starlink is still losing money” and “other companies are getting billions” in tax dollars, “we’ll just keep funding” the Ukrainian service.

Mr. Musk’s wealth has given him a prominent voice in geopolitics, and the Kremlin welcomed his proposal. Mr. Zelensky posted a Twitter poll asking, “Which Elon Musk do you like more: one who supports Ukraine, or one who supports Russia?” Mr. Musk later said in a tweet that he supported Ukraine.

During the interview with Andrew Ross Sorkin of The Times, the video link cut out, and when it resumed, Mr. Sorkin joked that Mr. Musk might have somehow cut the connection.

“I hear you,” Mr. Zelensky said. “Most important is that Mr. Musk will hear us.”

Mr. Zelensky said the risk that Mr. Putin would use nuclear weapons was not his biggest fear, and that it shouldn’t be the biggest fear of the West.

“I don’t think he will use nuclear weapons,” Mr. Zelensky said. “This is my opinion.”

Instead, Western democracies should be most concerned about Putin’s expansionist military ambitions, he said. If his military succeeds in conquering parts of Ukraine, he said, other neighboring democracies could be next.