A RECKLESS mum-of-three got drunk and torched her home hours after she was served with an eviction notice, a court heard.

Jordaine Liddle was about to lose her house for non payment of rent and decided to set three fires around the mid-terraced property late at night.

The 25-year-old left to stay with friends but came back 13 times to watch the inferno, the court heard.

Liddle even made false claims to strangers that there might be people in danger inside 26 Maple Close, Salford.

When police arrived at the scene in Greater Manchester, the defendant gave a false name and date of birth while firefighters who observed Liddle outside said she was behaving ”erratically.”

The arsonist also tried to pin the blaze, which could have harmed people in neighbouring properties, on somebody else. 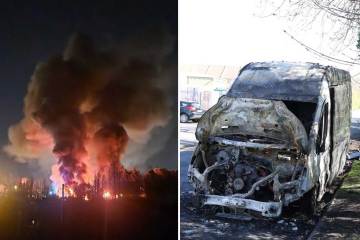 At Manchester Crown Court, Liddle showed no emotion as she admitted to arson being reckless as to whether life would be endangered and occasioning actual bodily harm.

Peter Malone, prosecuting said: ”The reasons for the termination notice were rent arrears, damage to property, rubbish being left in the gardens and the back and front of the property and not keeping it in a clean and sanitary condition.”

The court heard the 11.30pm fire occurred after Liddle had become embroiled in “family issues” and a troubled relationship with her boyfriend.

“There are reports of noise nuisance and smashed windows and she had failed to allowed a neighbourhood officers to inspect the premises,” Mr Malone continued.

”But CCTV showed the defendant arriving at her home with a male and after he left smoke was seen coming from the property whilst she would go between her property and a neighbouring house and she did this approximately 13 times,” he added.

According to the prosecutor, a neighbour who was walking by with his girlfriend saw smoke and asked Liddle if she was alright.

Liddle then led the pair inside to check if anyone was inside as she claimed she thought there might be.

Mr Malone told the court: “The defendant then said she had dialled 999 but she hadn’t.”

Tests uncovered the mum-of-three had used a lighter to set fire to a sofa, clothes maiden and a bedroom carpet before fleeing.

Liddle was also on bail at the time of the fire, having appeared in court just five days before.

The arsonist was due to face trial after being accused of drunkenly beating up another mum in front of her two-year-old son and tearing out her braids over an ATM machine row.

Defence council Henry Blackshaw said: ”She was intoxicated at the time and her recollection of the incident was extremely poor.

“She has an unfortunate background and had an early exposure to drinking.

”At the age of 16 she was in an abusive and controlling relationship and reports show after the birth of her youngest child, she was highly likely to have had post natal depression.

“She accepts she was behaving chaotically and stupidly but she now wants to keep herself fit and well to become a proper mother to her children.”

Judge Mr Recorder Peter Wright KC told Liddle: ”The housing association took steps to evict you due to a litany of failings on your part as regards the upkeep of your property.

“Your response was that evening, when heavily intoxicated was to set fire to the premises.

”You lied at the scene but it was obvious you were involved in the setting of that fire as you had a soot-blackened complexion.

”This offence happened late at night when people would be next door and possibly in bed.

”This was a mid-terraced property occupied on both sides and it was obvious to anyone there was a risk of causing serious physical harm – even to someone as intoxicated as you.”

Liddle was jailed for three years and ten months.

The costs of the damage caused to the house is not known but was thought to be ”minor.”