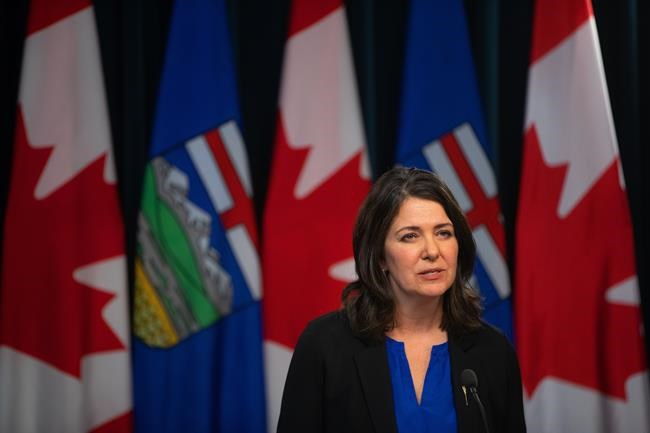 EDMONTON — The Alberta government has introduced a bill that would grant Premier Danielle Smith and her cabinet broad powers to rewrite provincial laws behind closed doors in an effort to push back against Ottawa.

Smith said past efforts to work with the federal government have not worked and Ottawa continues to interfere in constitutionally protected areas of provincial responsibility from energy to health care.

“We’re going to try something new. I think we’ve got their attention,” Smith told reporters after introducing the Alberta Sovereignty Within a United Canada Act.

“I think that that begins a constructive relationship, and that is what this was all about. You do not have that relationship change without a push. This was a push.”

Smith told reporters that she hopes the bill doesn’t need to be used, but briefing documents provided to reporters said the government hopes to use it as early as the spring to fight Ottawa on a slew of issues, including energy development, agriculture, health care, education, firearms, child care, property rights and social programs.

Opposition NDP deputy leader Sarah Hoffman said the bill is a flagrant undemocratic power grab by a premier who has not sought a popular mandate to propose such sweeping changes.

“What (Smith) wants to try is to give herself dictatorial powers in this province to be able to ram through whatever legislation she wants,” said Hoffman.

“That is certainly nothing that any government anywhere in Canada has a mandate to do — and is certainly something that Danielle Smith and the UCP do not have a mandate (for), with only about one per cent of Albertans actually voting for her to be leader of the party and in turn the premier of our province.”

“This isn’t about the federal government. That’s the bogeyman. That’s the excuse,” said Bratt, with Mount Royal University in Calgary.

“This is about violating the rule of law against Albertans.

“These are emergency powers that they’re asking for in the absence of an emergency … you’re allowing the cabinet to unilaterally change laws and bypass the legislature.”

The bill was the cornerstone promise of Smith’s successful campaign to win the leadership of the United Conservative Party last month to take over as premier from Jason Kenney.

It has been criticized by Kenney and even some of Smith’s leadership rivals — four of whom sit in her cabinet — as a recipe for legal uncertainty, investment flight and the first step toward separation.

Kenney was not in the chamber when the bill was introduced, and later in the afternoon announced on social media that he had resigned his Calgary-Lougheed seat.

The bill was tabled after Lt.-Gov. Salma Lakhani read the throne speech in the chamber, launching a new legislative session and outlining the government’s plans and priorities.

Lakhani said, “Ottawa is not our ruler. Ottawa is our partner and it needs to begin acting like it.”

The bill promises to follow court rulings and the Constitution, but says it would be up to Ottawa to sue the province to resolve disputes instead of the other way around.

Under the bill, cabinet ministers or Smith would decide whether federal rules are harmful to Alberta. The bill does not give a legal definition of what constitutes harm.

Cabinet would then craft a resolution laying out the nature of the harm and steps that need to be taken to fight back. The 87-member legislature would vote on the resolution and if it gets a majority, the resolution passes and cabinet goes to work implementing it.

Cabinet can implement the resolution by using existing powers in legislation or it can unilaterally amend any provincial laws it deems applicable. Those laws are normally debated and passed in the legislature.

The bill says while cabinet can then direct any “provincial entity” to not enforce those federal laws or policies, it cannot do so with individuals or private businesses. It also stresses that the bill cannot infringe on First Nations rights, a concern Alberta treaty chiefs have raised.

Any resolution passed by the assembly would expire after two years, unless the legislature votes to end it earlier. However, cabinet can extend orders and rules made under any resolution for a maximum of two extra years.

The window to fight the act in court in a judicial review is reduced from the normal six-month time frame to 30 days.

This report by The Canadian Press was first published Nov. 29, 2022.