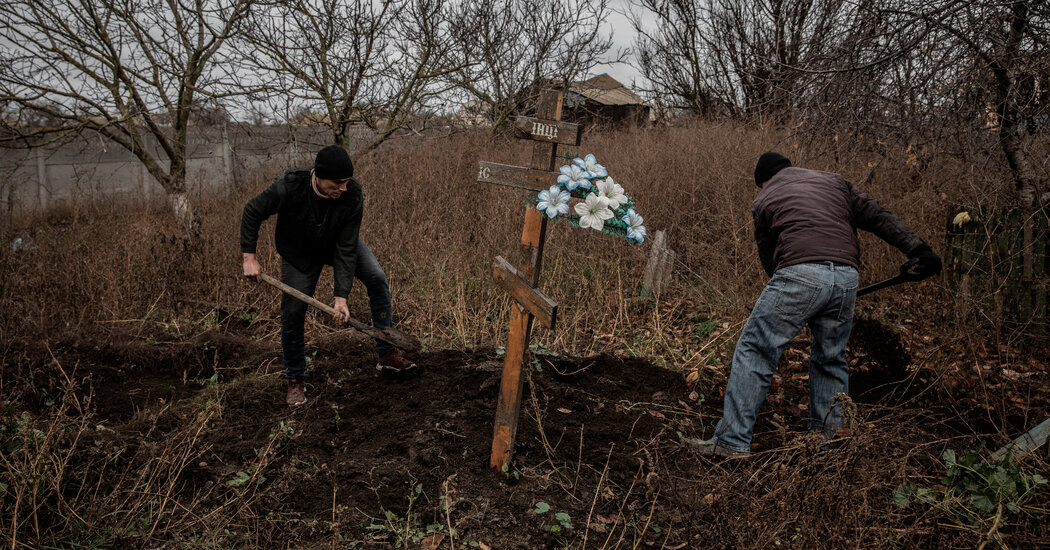 PRAVDYNE, Ukraine — First came small pieces of bone. Then a pair of arms tied at the wrists with rope.

And then the shovel unearthed a skull with a bullet hole, mouth cracked open, teeth covered in thick, black mud.

Even though scenes like this have been repeated across Ukraine wherever the Russians have retreated, the clump of villagers and police officers seemed stunned on Monday as they stood at the lip of a common grave in Pravdyne, a village near the city of Kherson.

A cold rain pelted their backs but they didn’t move as the grave was exhumed. None of the villagers even knew the last names of the six men who had been killed, execution-style, and then buried here, but that didn’t matter.

“They were Ukrainians,” said Kostiantyn Podoliak, a prosecutor who had come to investigate.

And now their remains lay in a shallow grave because of it.

Kherson and the surrounding villages in southern Ukraine were liberated after eight brutal months of occupation, when the embattled Russian forces abruptly pulled out more than two weeks ago. Residents streamed into the streets, waving flags, hugging soldiers and clinking glasses of cognac.

But as days pass, that elation has given way to mounting evidence of atrocities, and the sobering reality of battered, barely livable communities from which most civilians fled months ago and may not return anytime soon. On their way out, the Russians blew up power stations, taking down electricity, running water, heat and phone service and casting residents back more than a century.

And though the Russians are gone, they continue to kill people in and around Kherson, a city that was home to some 280,000 people before the war. Nearly every morning the whomp of Russian artillery shells fired from miles away, across the Dnipro River, shakes the city. More than a dozen civilians have been killed in the past week, including four men whose fatal mistake, residents said, was to stand together outside and share some coffee.

Along Kherson’s riverbanks, people dart behind walls. Officials say that Russian snipers, hiding a mile or so away, are taking potshots at civilians scooping water from the river to wash with.

“They are trying to terrorize us,” said Oleksandr Samoylenko, a politician and head of Kherson’s regional council. “And until we liberate the territory around Kherson, Kherson itself won’t be truly liberated.”

At night there’s another cruel reminder that the Russians are still close. Kherson stands almost completely dark but just across the river, lights glow on that bank. The towns on the other side of the Dnipro are so much smaller than Kherson and so much less significant to the economy and the country. But the Russians control them, so those little towns still have electricity.

Like nearly all the Ukrainian-held towns and villages near Kherson, Pravdyne — prewar population 1,222, according to the village head — has no power or running water. It has become a desolate scene of leafless trees, deserted homes and long, muddy roads.

A small convoy of war crimes investigators traveled down one of those roads on Monday, after hearing about the deaths of several security guards who came from out of town and worked for an agricultural company, living in a pale blue house.

According to the villagers, one guard, a friendly man named Vlad, had struck up a relationship with a teenage girl who had been badly abused by her stepfather. The stepfather was worried that he might get in trouble, the villagers said, so he started collaborating with the Russians and made up a story that Vlad and the other security guards were spying on the Russians.

One morning in mid-April, Anatoliy Sikoza, a neighbor, heard an explosion at the house. When he ran over, he found it destroyed. Sprawled on the ground, half-buried in the rubble, lay the bodies of six of the seven security guards and the teenage girl. Mr. Sikoza said he’s a hunter and knows a thing or two about death.

“And I could tell it wasn’t the explosion that killed them,” he said.

He stepped closer. He saw that several of the men had their hands tied behind their backs and that their eyes were blindfolded. The girl, he said, looked as if she had been strangled.

Such discoveries have been a recurring horror in Ukraine. In April, after the Russians withdrew from the suburbs of Kyiv, the authorities found hundreds of bodies of civilians, particularly in the town of Bucha, and residents said Russian soldiers had executed many of them, most often for no reason.

To the east, there were similar finds in Izium in September and Lyman in October after the Russians retreated from a Ukrainian offensive.

In Pravdyne, Mr. Sikoza said he begged the Russian soldiers to allow him to bury the dead. They refused. So many people had fled the village that abandoned dogs roamed the roads. They found the bodies and began ripping them apart.

Mr. Sikza begged again. Finally, after five weeks, the soldiers allowed him to prepare a grave for six of the security guards; he could not find the body of the seventh and the young woman’s family buried her separately.

For the next six months, the Russians dug into Pravdyne. They cut trenches along the irrigation canals. They made foxholes along the road. They built concrete-reinforced bunkers that turned this little farm town into a fortress.

Ukrainian commanders have said that they lost hundreds of men in waves of assaults trying to take Pravdyne. It stands at a lonely position about halfway between Kherson, one of the biggest cities the Russians seized, and Mykolaiv, about 30 miles to the northwest, which they were unable to capture.

In early November, the Russians began to move out. Ukrainian forces flooded in a few days later. War crimes investigators, aid workers and others soon followed. A tip from a journalist who had spoken with villagers led investigators to the common grave on Monday. Investigators are removing the bodies to analyze the cause of death and to seek to use the evidence for war-crimes prosecutions of Russian forces.

“I knew it would be hard but I wasn’t prepared for this,” said Serhiy Rebizhenko, a handyman who had been drafted by village elders to dig out the common grave. “I knew these people. I had just joked with them. And now look at them.”

Even veteran police officers seemed shaken. They catalogued the body parts, barely saying a word. Their eyes lingered on the skulls.

Serhiy Motrych, a medical examiner with 28 years’ experience, has seen many dead people. On Monday, after hauling decomposing remains from the grave and laying the pieces on sheets of clear plastic, he sat in the front seat of his car, staring straight ahead. “I’ve been doing this so long I don’t feel any emotion,” he said.

But then he paused. His lip started quivering. He turned away.

“My nephew was just killed on the front line,” he said, his voice filled with anguish.

He never finished his sentence.