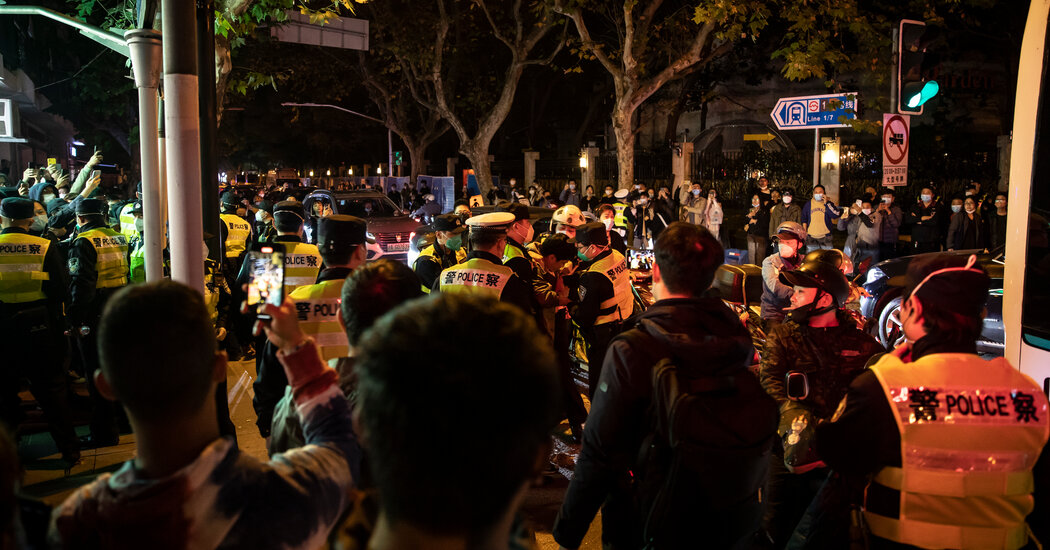 Then they went home, shivering in disbelief at how they had challenged the most powerful authoritarian government in the world and the most iron-fisted leader China has seen in decades.

Young Chinese are protesting the country’s harsh “zero-Covid” policy and even urging its top leader, Xi Jinping, to step down. It’s something China hasn’t seen since 1989, when the ruling Communist Party brutally cracked down on the pro-democracy demonstrators, mostly college students. No matter what happens in the days and weeks ahead, the young protesters presented a new threat to the rule of Mr. Xi, who has eliminated his political opponents and cracked down on any voice that challenges his rule.

Such public dissent was unimaginable until a few days ago. These same young people, when they mentioned Mr. Xi online, used euphemisms like “X,” “he” or “that person,” afraid to even utter the president’s name. They put up with whatever the government put them through: harsh pandemic restrictions, high unemployment rates, fewer books available to read, movies to watch and games to play.

After nearly three long years of “zero Covid,” which has turned into a political campaign for Mr. Xi, China’s future looks increasingly bleak. The economy is in its worst shape in decades. Mr. Xi’s foreign policy has antagonized many countries. His censorship policy, in addition to quashing challenges to his authority, has killed nearly all fun.

As a popular Weibo post put it, Chinese people are getting by with books published 20 years ago, music released a decade ago, travel photos from five years ago, income earned last year, frozen dumplings from a lockdown three months ago, Covid tests from yesterday, and a freshly baked Soviet joke from today.

“I think all of these have reached a tipping point,” said Miranda, a journalist in Shanghai who participated in the protest on Saturday evening. “If you don’t do anything about it, you could really explode.”

In the last few days, in interviews with more than a dozen young people who protested in Shanghai, Beijing, Nanjing, Chengdu, Guangzhou and Wuhan, I heard of a burst of pent-up anger and frustration with how the government implements “zero Covid.” But their anger and despair goes beyond that, all the way to questioning the rule of Mr. Xi.

Two of these people said that they don’t plan to have children, a new way to protest among young Chinese at a time when Beijing is encouraging more births. At least four of the protesters said that they were planning to emigrate. One of them refused to look for a job after being laid off by a video-game company in the aftermath of a government crackdown on the industry last year.

They went to the protests because they wanted to let the government know how they felt about being tested constantly, locked inside their apartments or kept away from family and friends in the Covid dragnet. And they wanted to show solidarity for fellow protesters.

They are members of a generation known as Mr. Xi’s children, the nationalistic “little pinks” who defend China on Weibo, Facebook and Twitter. The protesters represent a small percentage of Chinese in their 20s and early 30s. By standing up to the government, they defied the perception of their generation. Some older Chinese people said that the protesters made them feel more hopeful about the country’s future.

Zhang Wenmin, a former investigative journalist known under her pen name Jiang Xue, wrote on Twitter that she was moved to tears by the bravery of the protesters. “It’s hard for people who haven’t lived in China in the past three to four years to imagine how much fear these people had to overcome to take to the streets, to shout, ‘Give me liberty, or give me death,’” she wrote. “Amazing. Love you all!”

As first time marchers, most of them did not know what to expect. A Beijing protester said that she was so tense that she felt physically and emotionally exhausted the next day. More than one person told me that they needed a day to collect their thoughts before they could talk. At least three cried in our interviews.

They are proud, scared and conflicted about their experiences. They have different views about how politically explicit their slogans should be, but they all said that they found shouting the slogans cathartic.

Miranda, who has been a journalist for eight years, said that she couldn’t stop crying when she shouted with the crowd, “freedom of speech” and “freedom of press.” “It was the freest moment since I became a journalist,” she said, her voice cracking.

All the people I interviewed asked me to use only their first name, family name or English name to protect their safety. They had felt a relative safety when marching with others just days earlier, but none dared to put their name to comments that would be published.

The slogans that they recalled chanting were all over the place, illustrating the wide frustration with their lives. “End the lockdown!” “Freedom of speech!” “Give back my movies!”

Quite a few of them were taken aback by how political the Saturday protest in Shanghai turned out to be.

They were equally surprised, if not more, when more people returned on Sunday to request the release of protesters who had been detained hours earlier.

All six Shanghai protesters I spoke with thought that they were going to a vigil on Saturday evening for the 10 victims who died in a fire Thursday in Urumqi, the capital of the Xinjiang region in China’s west. In the beginning, the atmosphere was relaxed.

When someone first chanted, “No more Communist Party,” the crowd laughed, according to Serena, a college student who is spending her gap year in Shanghai. “Everyone knew it was the redline,” she said.

Then it became increasingly charged. When someone yelled, “Xi Jinping, step down!” and “C.C.P., step down!” the shouts were the loudest, according to Serena and other protesters who were also there.

In Beijing, a marketing professional in her mid-20s with the surname Wu told her fellow protesters not to shout those politically explicit slogans because that would guarantee a crackdown. Instead, she shouted slogans that urged the government to implement the rule of law and release detained Shanghai protesters.

A protester in Chengdu and one in Guangzhou, separated by 1,000 miles, both said that they were stopped from shouting slogans that other demonstrators deemed too political and were told to stick to the Covid-related demands.

For many of them, this weekend was their first brush with the police. A protester named Xiaoli in Chengdu said that she had never seen so many police in her life. After being chased by them, she said that she could hear her heart beating fast when she passed by officers on her way home.

It was clear that many protesters blame Mr. Xi for the extremely unpopular “zero-Covid” policy. A young Shanghai professional with the surname Zhang said that Mr. Xi’s norm-breaking third term, secured at last month’s party congress, spelled the end of China’s progress. “We all gave up our illusions,” he said.

He cried when he mentioned an old man’s question during this year’s Shanghai lockdown, “Why has our country come to this?” Mr. Zhang, who said that he grew up poor in a village, was grateful for the government’s assistance in his education. “I thought we would only move upward,” he added.

The young protesters are most conflicted about the impact of their actions. They felt powerless about changing the system as long as Mr. Xi and the Communist Party are in power. They believe that many people in the public supported them because the unyielding Covid rules have violated what they see as baseline norms of Chinese society. Once the government relaxes the policy, they worry, the public’s support for protests would evaporate.

At the same time, some of them argued that their protests would make the public aware of their rights.

No one knows what the protests will become — a moment in history, or a footnote. The official state media has kept quiet, though some pro-government social media bloggers have pointed fingers at “foreign forces.” Police have enhanced their presence on the streets and called or visited protesters in an attempt to intimidate them.

I asked Bruce, a Shanghai finance worker in his 20s, whether the protests meant that people have changed their view of Mr. Xi. He responded, “It was probably not because the public’s opinion of him changed, but because those who are critical of him have spoken up.”