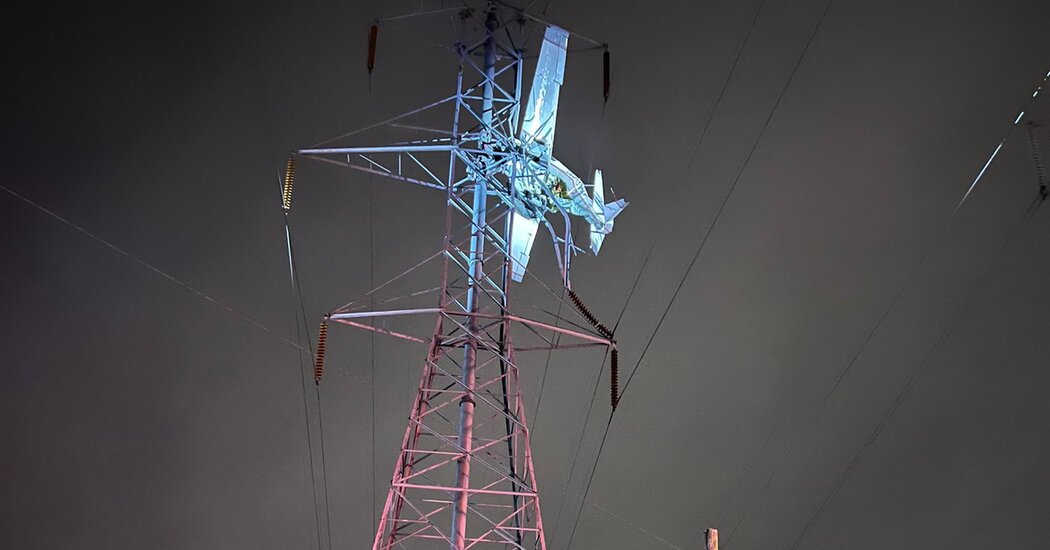 A small plane crashed into a transmission tower in Maryland on Sunday, knocking out electricity to roughly 85,000 customers as rescuers raced to extricate the two people on board who were trapped about 100 feet above the ground, the authorities said.

The pilot and the passenger, whose names were not released by the authorities, did not appear to be seriously injured, Pete Piringer, a spokesman for the Montgomery County Fire and Rescue Service, said on Sunday.

He said the authorities had been in contact with the two people as the aircraft dangled in the power lines and tower. Chief Scott Goldstein, of the county fire and rescue service, said in a news conference on Sunday night that officials had told the pilot and the passenger to conserve battery life on their phones in order to communicate with rescuers.

Mr. Piringer said the pilot and passenger had been flying to Montgomery County Airpark, an airport near Gaithersburg, Md., about 40 miles west of Baltimore. The Federal Aviation Administration said the plane, a single-engine Mooney M20J, had departed from Westchester County Airport in White Plains, N.Y., on Sunday.

It remained unclear what led to the crash, which happened in Montgomery Village, Md., around 5:40 p.m. and made for unusual photos by residents and officials on social media. The images and videos showed the plane entangled in power lines and seemingly suspended in the air in a snarled mess of metal.

By 9:30 p.m. on Sunday, crews had devised a rescue plan, Chief Goldstein said: First, crews will go up the tower and ensure the wires have no residual power. The crews will place cables on the wire and transfer any static electricity to a ground source, he said.

Another crew will then use bucket trucks or an “extraordinarily large crane” to access the aircraft, secure it to the tower and remove the pilot and the passenger, Chief Goldstein said.

“It’s not going to be stable until it’s chained and strapped in place,” Chief Goldstein said. “Any movement, any accidental movement, could make the circumstance worse.”

Pepco, the energy company in Maryland affected by the crash, said on Twitter that it was “awaiting clearance to the scene before crews can begin work to stabilize the electric infrastructure and begin restoring service.”

Mr. Piringer said the power failures caused by the crash had led to problems like stalled elevators and malfunctioning traffic lights on Sunday night.