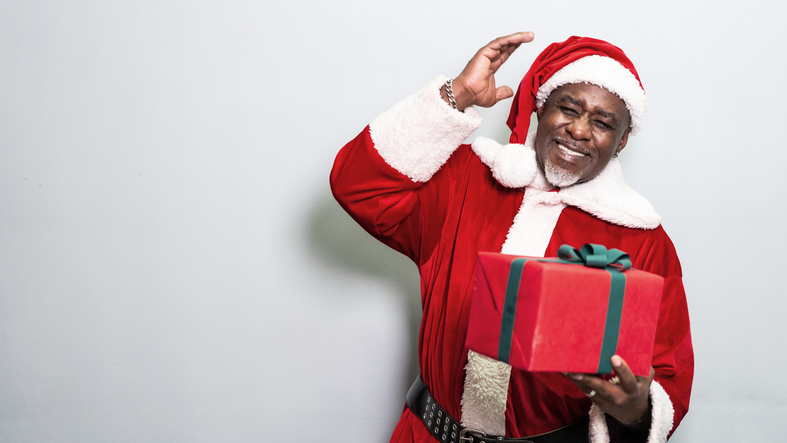 Established in 2013, Santas Just Like Me has been giving the gift of diversity to the holiday industry over the last decade. Over the years, the company has teamed up with several schools, churches, and businesses to bring Black and Brown Santas to families of color during the Christmas Season.

Facilitated by their well-trained staff, people who attend an event thrown by the North Carolina-based company allow families to take stunning professional photos alongside a Black or Brown Santa. Merchandise and other goodies are also given to participants to commemorate the unique experience.

Representation matters to Santas Just Like Me CEO Stafford Braxton

While Santa has been traditionally depicted as a white male, Stafford Braxton, the company’s CEO, believes that representation matters, especially during the holiday season.

“I think businesses are waking up, you know, and I’m seeing more Black Santa decorations in stores than I’ve ever seen,” he told WRAL in December. “It does my heart good to see that.”

How it all started

Braxton, a professional wedding photographer, started the company after he moved to Raleigh, North Carolina in 2011. While taking holiday photos in the Crabtree Valley Mall, many customers would often ask him if a Black Santa would be onsite for photos.

“People would come over to me and say, ‘Are you guys gonna ever have a Santa of color?’ And I jokingly said, ‘You know, they’re not gonna let you guys have a Black Santa here,’” Braxton said. “Unfortunately, I was right.”

Initially, Braxton approached the mall about featuring a Black Santa, but his request fell on deaf ears. That’s when he decided to take matters into his own hands.

He found his first Black Santa in 2012 and a year later, Santas Just Like Me was born. In 2013, Braxton threw their first event at the Hayti Heritage Center in Durham. The company has held events at the location every year with the exception of the pandemic.

While speaking to ABC 11, Natalie Bess, a local who frequents the Hayti Heritage Center, applauded the company for bringing diversity and inclusion to the Christmas space.

“We drive an hour and a half just to participate in this event,” Bess said of her and her children’s yearly participation. “I’m just real intentional about the images they see. That they see a Black Santa can bring toys and joy and all those good things around Christmas.”

One year, Braxton recalled seeing a grandmother break down into tears after witnessing her granddaughter pose with one of his Black Santas.

“She came over with tears, literally in her eyes, saying that she had never seen a Black Santa,” he said. “And she had me crying, and of course, I did not let her pay for those pictures,” he said. “There are countless stories like that. Parents that are just so appreciative that we’re doing this, that we’re giving them the opportunity.”

In the future, Braxton hopes to become a nonprofit and receive funding to bring more Santas of color to areas in need.

The Ultimate Gift Guide For The Black Intellectual Man

The Ultimate Gift Guide For The Intellectual Black Woman