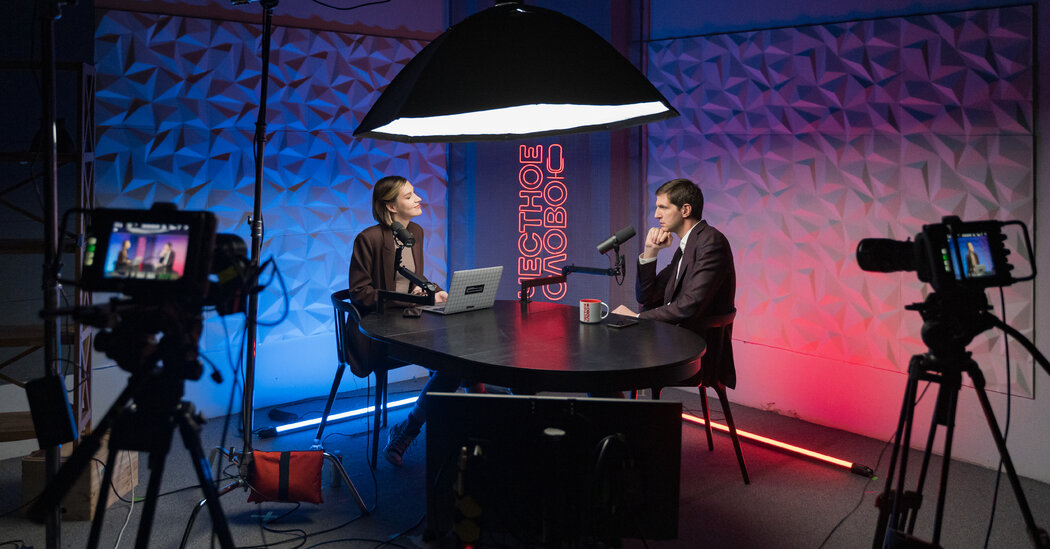 Before several dignitaries pushed a platter-size orange button in unison, Mr. Putin lauded homegrown turkeys as a model for assuring Russia’s independence. “Without any exaggeration, this is a question of our technological, scientific and food sovereignty,” he said.

The ceremony was carried solemnly by state television in Russia. But across the border in Vilnius, Lithuania, the event served as raw material for a very different type of broadcast: A skewering of the Russian president on YouTube by the exiled political team of Aleksei A. Navalny, the imprisoned opposition leader.

“With everything happening, it is completely insane,” said Nino Rosebashvili, an anchor at a YouTube channel run by the movement founded by Mr. Navalny. Mr. Putin, the anchor suggested, has taken to presiding over the most humdrum of events to avoid linking himself with Russia’s stumbling war against Ukraine.

In the months since Mr. Navalny was sent to a penal colony in 2021, his political network across Russia was crushed and the country’s opposition movement seemed dead. Many liberals fled into exile.

But now, with Russia mired in war, exile has proved a boon to the opposition movement. In Vilnius, the unofficial capital of Russian opposition abroad, the Navalny team is using YouTube to spearhead antiwar efforts in a way that is unthinkable at home.

“We threw away all our plans and reinvented ourselves as a media organization,” said Leonid Volkov, long Mr. Navalny’s chief of staff and now the head of its manifold efforts to counter the Kremlin narrative about the war. “This is the information front.”

Mr. Navalny used to stream videos a couple of hours each week. But at the start of the war, his team launched a new channel, Popular Politics, and it now broadcasts about 30 hours a week, producing more than 50 segments that are posted online as individual clips. The number of employees rose to 130 from about 70 back in the Moscow days, and the team just doubled its production space.

“We are seeing more and more Russians start to ask questions, and in their search for answers they are coming to us,” said Lyubov Sobol, a lawyer who had long worked on Mr. Navalny’s anti-corruption investigations and is running one of his YouTube channels separately from the others.

Mr. Navalny, too, is still being heard from, even as the Kremlin keeps piling years onto his sentence and the penal colony where he has been incarcerated since early last year subjects him to increasingly harsh conditions.

With his trademark irony, he noted via Twitter last Thursday that he kept hearing a radio station advertising local funeral services for military combatants. The funeral business must be booming for a mortuary to afford such advertising, Mr. Navalny said.

“Grandfather Putin” and his elderly cronies, he said, “imagined themselves as Napoleons, and the price is paid by those who get buried at a discount.”

No ghost writers create Mr. Navalny’s social media posts, according to members of his team, but they declined to be more specific. Mr. Navalny has repeatedly sued over his treatment, using court hearings where he appears via video link to lambaste the war.

Amid questions about whether the Navalny movement is viable without the political mandate and charisma of its founder, his lieutenants point to their YouTube audience. Popular Politics has grown to 1.64 million subscribers. That’s a fraction of the viewership for two channels originally created by Mr. Navalny himself, however, which are still running and have attracted around 9.5 million subscribers.

Addressing the question on a recent broadcast, Mr. Volkov said: “It is not a single person. It is a serious political organization which has accomplished several things in the past.”

Among other things, the organization had built a network of 45 regional offices in Russia working to unseat Putin supporters in local elections.

That campaign ended when the Kremlin labeled the budding political party an extremist organization in April 2021, but over the past month, the Navalny organization has started trying to re-establish about 20 to 30 regional offices on a “virtual” basis, Mr. Volkov said, with more than 12,000 people quietly volunteering.

Given the scattered protests that emerged over the Kremlin’s troubled mobilization for the war, the organization wants to be ready to help channel any resentment that emerges.

Popular Politics remains available to viewers inside Russia. Although Russia has banned Twitter, Facebook and Instagram, YouTube is still operating, not least because the Kremlin is desperate to reach the younger audience that shuns state television. Legions of Russian political figures, activists and journalists now host their own YouTube channels.

While the Navalny channels attract a steady stream of viewers, few of the Popular Politics clips become real blockbusters. Crowd funding brings in tens of thousands of dollars monthly, as does revenue generated from YouTube viewings, though YouTube’s decision to stop paying outlets for views generated inside Russia grates on the independent media outlets.

At the Vilnius offices, the walls are hung with posters calling for Mr. Navalny’s release. The conference rooms are named after highlights from previous investigations by the Anti-Corruption Foundation, a longstanding arm of the Navalny organization, such as one involving the Scheherazade, a superyacht tied to Mr. Putin.

Videos detailing the anti-corruption investigations pull in millions of viewers; one from last year alleging that a $1.3 billion palace was built for Mr. Putin on the Black Sea has garnered 125 million views. YouTube called it the most-watched Russian-language video in 2021, and the Kremlin, which usually ignores corruption allegations, issued a denial.

The group has made unconfirmed claims of corruption against other senior officials, as well.

The most recent investigation alleged that Gen. Sergey Surovikin, who is overseeing the Russian war effort, had accepted a roughly $1.7 million payment from an oligarch close to the Kremlin in exchange for liberating two phosphate mines in Syria in 2017. The Russian government did not react to the investigation.

Most of Mr. Navalny’s top lieutenants have done some jail time, so they left Russia to avoid longer sentences or worse, even if they are keenly aware that Putin foes have sometimes been poisoned in Europe as well.

“In Russia you need a 20-character password for your phone and 30 characters for something else, and you have to leave a camera on in your apartment when you go out to see if someone broke into your home, and on the street you have to check if you are being followed,” said Georgy Alburov, one of the anti-corruption investigators. “You feel safer here.”

The Popular Politics channel runs its version of a news show for two hours every night, with the headlines generally drawn from various Russian and international news organizations.

Certain themes recur, including the illegal nature of the war in Ukraine and the poor performance of the Russian military.

The mobilization announced in late September proved a big audience draw, with more than 17 million individual views, the best month ever, plus an additional 200,000 subscribers, said Ruslan Shaveddinov, one of the anchors. YouTube will not publicly confirm specific viewer numbers by month.

The idea is not to counter the lies propagated by Russian state media one by one — there are too many, team members said — but to counteract them more generally with verifiable news. One program concentrates on the ills of daily life in Russia, like a story about a woman who fell into a pothole at night while walking to find her husband’s mobilization camp. The hole was so deep that she had to wait until morning to be rescued.

Their YouTube channels go much further than regular news channels in attacking Mr. Putin, regularly condemning him as a “fascist.”

Their latest project is a public advocacy campaign to try to get the European Union and the United States — which have imposed sanctions on roughly 1,200 individuals for the war — to expand the list to 6,000 Russian government apparatchiks and Kremlin allies. Wider sanctions would help create rifts in the ruling hierarchy, Mr. Volkov said.

Journalists and political analysts, while praising the Navalny team’s YouTube offerings overall, say they are more advocacy than news and note that they have an emotional edge that regular news channels avoid.

During one interview, for example, Ivan Zhdanov, a top Navalny lieutenant whose father has been jailed in Russia on charges widely seen as motivated by his son’s work, attacked a pro-Kremlin military analyst as a “traitor.” The team called the incident a “mistake” and removed the clip from its archive.

Activists from smaller organizations also complain that it is too hard to get to speak on their shows.

“It’s not a media project in the professional sense,” said Tanya Felgenhauer, a longtime talk show host at Echo of Moscow, a liberal radio station closed at the beginning of the war, who now works on various YouTube shows of her own. “It’s a political media project of Aleksei Navalny’s team, and they do great, really. It’s just not journalism.”

Members of the team acknowledge that they are mainly activists and say they believed that creating the channel was the best way to try to end both the war and Putin’s rule.

“We are not journalists, we are a political organization, and we’re trying to reach our political goals, we are trying to make Putin suffer,” said Mr. Volkov.