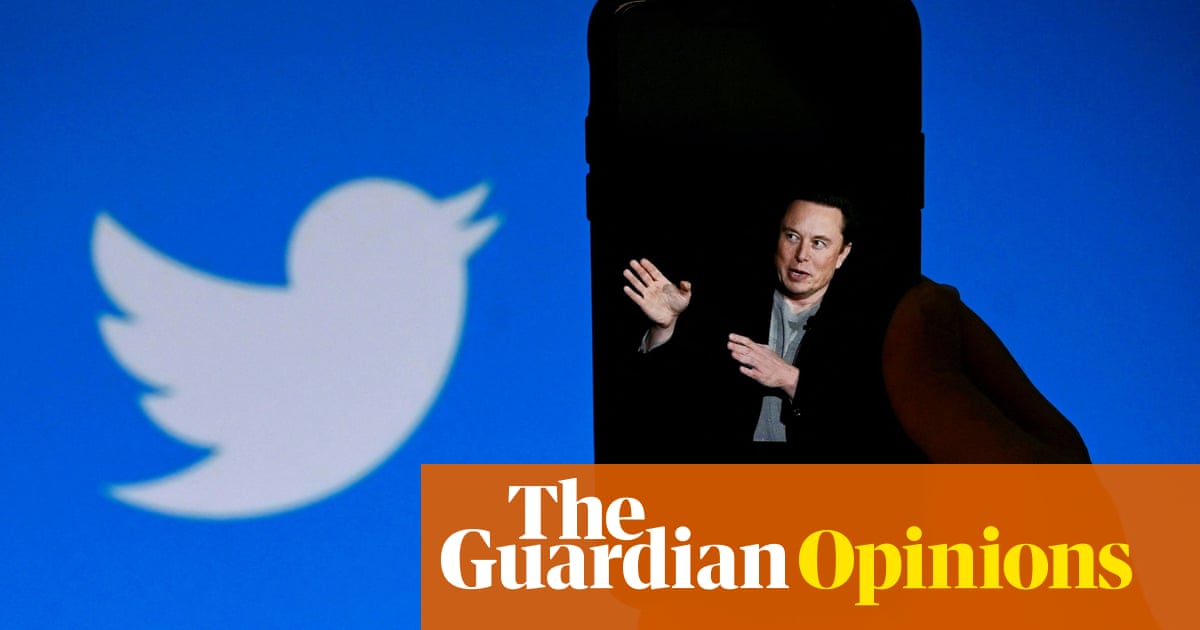 Free speech absolutists are like the cocky audience of a spectator sport – they think they could do better than the players, if they were just allowed a crack at it. To them, speech should be as free as possible, period. Nowhere is their oversimplification of the issue more evident than on social media, where abuse and disinformation have created a new frontier of regulation – and with it a cohort of disingenuous free speech warriors.

These absolutists are so unaccustomed to facing consequences for their actions that they have pushed the idea that a censoring “woke” orthodoxy now prevails, and is a threat to freedom of expression. Elon Musk is among them, but since his takeover of Twitter he is having to learn quickly that free speech is not simply about saying whatever you want, unchecked, but about negotiating complicated compromises.

Musk arrived at Twitter with an approach that I am sure he thinks is pretty straightforward. The site, he believes, has a leftwing bias that should be corrected by allowing suspended users back on to the platform. The accounts of Donald Trump, Kanye West and Jordan Peterson have been reinstated, along with nearly all those that were suspended for falling foul of old Twitter’s rules on abuse and hate speech.

This means that Twitter is about to turn into a far more unpleasant and potentially dangerous experience. Little of this appears to have anything to do with a political strategy on Musk’s part. Like Trump, Musk has become the tribune of fascists and racists by way of adolescent contrarianism, an insatiable need to flaunt his control and a radicalising inability to cope with being told he’s wrong on the internet. For him, “free speech” seems merely a vehicle for his delusional plan to make Twitter into a fawning “digital town square” that he presides over.

But not even the richest man in the world can pull that sort of free speech arena off. Twitter isn’t sustained by previously suspended users, but by the millions of people for whom the platform feels (most of the time) like a political and cultural slipstream. Twitter has an odd social media profile. It is both extremely influential and also often quite trivial, and the coexistence of the two is what makes the site viable. Twitter is a window into the soul of politicians and opinion-makers – its style of interactive rolling commentary works well in drawing them out to post their views or engage with others, revealing personalities and politics that otherwise would be surpressed or closely edited. And it is the first resort of citizen journalists and those marshalling political protest. It also remains the only social media platform where people with little clout or profile can challenge elites directly.

But Twitter is also a solipsistic place, where even small users can become protagonists in spats that are then amplified both by the site’s algorithms and a rightwing media that trawls it for telltale signs of “wokeness” or “cancel culture”. For better or worse, it is Twitter’s adjacency to current affairs and general political and cultural discourse that makes it, uniquely among platforms, feel relevant.

If you’re not on Twitter, chances are that you have come across stories that started out or were precipitated there, whether it’s a debate on trans rights that swirls around JK Rowling’s tweets, or calls to organise street protests against dictators in the Arab world. For all these things to be possible on the same site, robust content moderation is necessary to ensure conversations don’t descend into doxing (maliciously publishing someone’s personal information) and hateful conduct, and that news and journalism is verifiable. In the absence of moderation, or at least the appearance of it, things fall apart pretty quickly. When a place is not fun or hospitable or truthful to users, it also becomes commercially pointless for advertisers. Since Musk took over, half of Twitter’s top 100 advertisers are reported to have left the site. If things continue as they are, it is hard to see a future for the company.

The ultimate cause of that demise will be the failure of Musk to understand that for some speech to be free, other speech has to be limited. It is generally true that if a service is free then it is by definition exploitative of its users – if you are not paying for a product, the axiom goes, then you are the product. But in the case of social media, the regulation of your speech is the product. If a platform becomes too toxic, then it is useless for anyone except those who want an extremist ghetto of agitators. In that sense, social media is very much like society in general. Political and legal authorities are in the business of content moderation, in order to make our shared space as stable and safe as possible for a majority of people. The public and other stakeholders, such as the press, businesses and social media companies themselves, are in constant negotiations with these authorities on what those limits should be – for instance, whether religious dress is protected speech, or what constitutes incitement to violence.

Old Twitter was far from perfect, and by its own admission its algorithms favoured rightwing accounts. But it was improving because of the drag that advertisers, regulators and users were putting on its algorithmic urge to encourage antagonistic activity. The high-speed destabilisation of Musk’s Twitter should be a warning to free speech absolutists. The set of curbs they object to are those that make users’ experience of social media, and life in general, possible; they protect against, among other jeopardies, libel, impersonation, plagiarism, misinformation and grooming. In essence, all our free speech arguments are about finessing, rather than obliterating a system of functional restrictions.

Those with power have more leeway to define what free speech is, but they can rarely do so without limitation. Twitter’s chance of survival is dependent on whether Musk chooses to accept that, like freedom of speech, his power is not absolute.