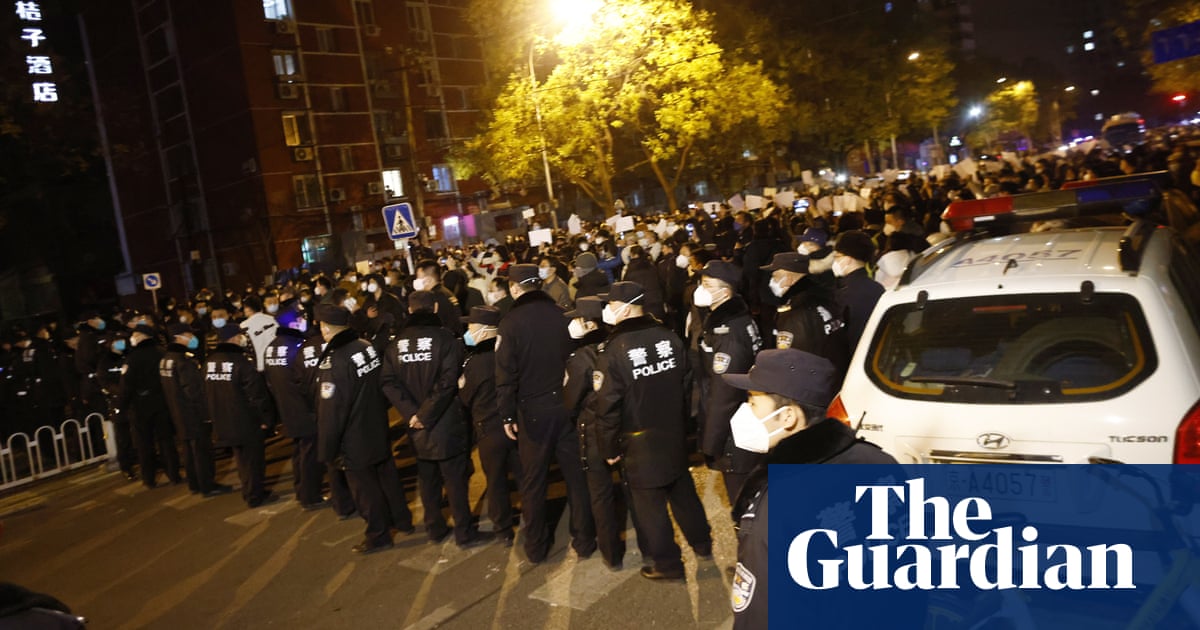 Just five weeks after being elected to a historic third term, President Xi Jinping suddenly faces cracks in the facade of unchallenged authority that he so successfully presented to the world at the 20th national congress of the Chinese communist party.

For groups of protesters, apparently without central coordination, to take to the streets across China and to social media, and for some then explicitly to call for Xi and the communist party to stand aside, is a seismic shock.

The echoes with Iran are superficially present, even if the two political cultures and the proximate causes of the unrest are entirely different. Equally the rush to compare these protests with those of 1989 is tempting, but wrong, as it has been previously during numerous bouts of dissent over the last two decades.

But many observers detect two unique factors about the current protests. In 1989 the protests were largely confined to Beijing, but these demonstrations are much more geographically diffuse, and with an apparent knowledge of what other cities are doing. Secondly, there is a sense that the proximate cause – Xi’s unending hallmark zero-covid policy – is enough to bring people on to the streets, but also resonant enough to pose wider questions about how the Chinese state operates.

So Covid provides a frame for workers in Zhengzhou, for students across dozens of campuses and for the people of Urumqi, the capital of the remote region of Xinjiang where the deaths of 10 people in a high-rise apartment block fire has been blamed on Covid restrictions delaying firefighters. In Urumqi, social media showed communist officials pleading for patience after being berated for the lockdowns that have lasted in some cases for months. Social media, however controlled in China, is a combustible new element.

One of the difficulties for the government is that compliant local officials, worried about retribution from above if an outbreak occurs, have imposed stringent controls, and yet have no real control over a centralised policy that offers no timetable for the cycle of lockdowns and protests to end. The sight of maskless spectators from all round the world enjoying football in Doha is even more galling for a country that, it seems uniquely, cannot after three years shed the virus.

The Chinese government says that this is because it prioritised life over the economy, keeping deaths down to below 6,000 compared with the millions in the west.

Nevertheless, in response to the public impatience, on 11 November the national health commission published a 20-point plan to refine some virus controls, such as reducing quarantine periods and easing restrictions on close contacts of confirmed cases, raising hopes for ordinary Chinese people that life and their daily income will return nearer to normal. It was hardly a plan to go for herd immunity, but it implied a relaxation of the policy of eliminating rather than living with the virus. It might also put China back on the path to growth.

But the expected easing has not happened. On Wednesday last week China reported nearly 30,000 new locally transmitted Covid infections, the highest on record, with outbreaks in every region of the country. By Sunday that figure had reached 40,000.

New curbs on daily life and economic activity were imposed in cities including Beijing, Guangzhou (south China’s manufacturing hub) and Tianjin. Shijiazhuang, a city of 11 million people south-west of the capital, tried easing some control measures, but reversed course within days after case numbers rose. The wave of infections if China ended zero tolerance would simply be too large for the health system to cope. Too few elderly people have been fully vaccinated.

Xi is unlikely to tolerate dissent for long, since he is likely to see the protests as a challenge not to just his Covid policy but to collectivist communist ideology, and his authority. In 2013, just months after his appointment as party general secretary, Xi gave an address in which he warned about the paramount importance of protecting ideological supremacy, saying “once ideological defences are breached, other defences are very difficult to hold”.

No one can yet know how weak the CCP’s defences are, or if some dam has burst. Either way, expect the ruthless methods deployed in Hong Kong to be put to use on the mainland.

Regardless of what happens next, for Xi this is a blow to his international prestige only months after returning to the world stage. With all his recent rhetoric of the great rejuvenation of China, the decline of the west and the CCP’s power to change the course of history, he now risks looking mortal, and dangerously out of touch.