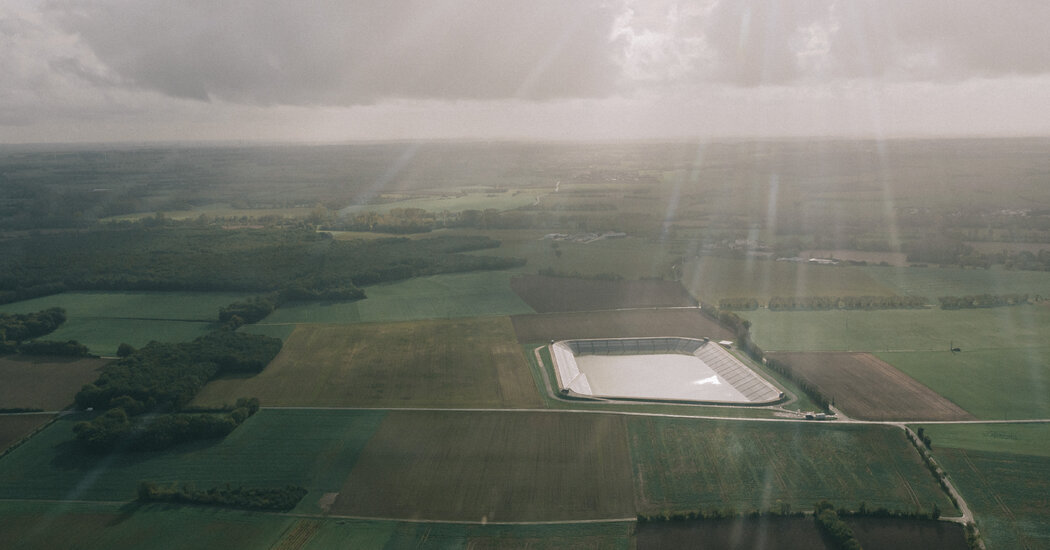 MAUZÉ-SUR-LE-MIGNON, France — Wearing bulletproof vests and carrying guns, the gendarmes appear suddenly in the middle of farm fields misted by morning rain. They stand behind two fences equipped with security cameras and overhead lights, looking every bit like prison guards. But there is no prison for miles.

Instead, they guard a large pit intended to serve as a gigantic reservoir. Welcome to the front line of France’s water wars.

World leaders gathered for two weeks at the COP27 climate conference in Egypt, debating ways to mitigate the effects of climate change and the conflicts it engenders. But while the competition for scarce water is associated more with arid regions in the Middle East and Africa, Europe is not immune.

After a scorching summer that climatologists called a harrowing postcard from the future, with record heat waves, wildfires and droughts that dried up rivers, France is now embroiled in a widening battle over who should get priority to use its water and how.

The French government has embarked on a plan to build large reservoirs around the country to serve farmers during the increasingly arid spring and summer months.

But what the government calls an adaptation, opponents deem an aberration — what they consider the privatization of water to benefit a few, outdated industrial farmers.

Confrontations between the two sides have grown increasingly ugly — a taste, perhaps, of the water wars predicted to worsen around the world as temperatures rise.

Thousands of activists opposed to the latest reservoir under construction, in the western region of Nouvelle-Aquitaine, recently faced off against some 1,600 military police officers in the middle of fields of rapeseed and the dried-up remains of wheat.

The protesters later paraded with two sections of water pipes they had dug up and dismantled so they could not later feed the reservoir — the latest sabotage of many, which they consider civil disobedience.

“It’s them that are eco-terrorists,” responded Jean-Jacques Guillet, a former mayor of three villages, watching diggers claw at the red earth on the site days later. “They are terrorizing the environment.”

“They sent 1,600 gendarmes to protect a hole full of pebbles,” he added, looking at four armed military police officers standing nearby.

There are hundreds of thousands of water reservoirs across France that farmers have used for generations, stirring little controversy. To environmentalists, what makes the newest ones different is their size and the source of the water they collect.

The latest under construction will span 16 hectares (nearly 40 acres) and hold the equivalent of 288 Olympic swimming pools full of groundwater, pumped in by pipes. Opponents like Mr. Guillet call them “megabasins.”

In theory, the reservoirs suck up water during the wet winter months and hold it for farmers to use during the critical spring and summer growing seasons. That way, they will ensure the country’s food production, and also reduce the strain on the aquifers during increasing summer droughts.

There is no official count of how many mega-reservoirs exist, but activists estimate there are about 50, clustered in the west of the country. The scene of the latest battle is in the region of Deux-Sèvres, where plans to build 16 were unveiled in 2017. To sweeten the deal, the newly formed water cooperative representing some 230 farmers later signed an agreement to green their practices by reducing their use of pesticides, building hedges and bolstering the biodiversity on their lands.

The cooperative, called Water Co-op 79, considers the planned megabasins a lifeline. “The idea is to secure water to keep agriculture in the territory,” says François Petorin, a grain farmer, who grows wheat, rapeseed, sunflowers and a little corn over 210 hectares. “We know that two years out of 10, there’s a risk that we won’t fill the reservoirs 100 percent. But today, 10 years out of 10, we risk not being able to water our fields.”

That is the definition of privatizing water, critics say. Worse, they add, it is being done with public funds: Seventy percent of the budget of 60 million euros (about $62 million) to build the Deux-Sèvres reservoirs is being covered by the French government.

Rather than forcing farmers to find less water-intensive forms of agriculture, the reservoirs will actually increase their water use largely to irrigate corn fields, opponents argue.

“Our president has decided this is the best way to fight climate change — creating the maximum number of basins at a national level,” said Mr. Guillet, the former mayor. “It’s not just the hogging of water by a minority, funded with our own money, but it’s wasted,” he added, pointing to reports on evaporation from reservoirs.

An environmental association has successfully sued over many of the reservoirs in a neighboring region, where after more than a decade of appeals, judges have ruled them illegal. They remain empty gaping holes. The group plans to go back to court to force the local government to return the land to its original state or some approximation.

“It is very, very, very difficult to go back even when they are prohibited,” said Patrick Picaud, the vice president of the environmental organization Nature Environment 17, which has also taken the Deux-Sèvres plan to court, resulting in a reduction in the number of reservoirs authorized as well as the amount of water they can hold.

“They are a disaster — for the environment, for public funds and even for agriculture,” Mr. Picaud said. “There needs to be a law that forbids the construction before the court process is finished.”

To complicate the issue, most of the large reservoirs in France are being built close to the country’s second largest wetland, the Marais Poitevin — a huge marsh interlaced with canals that locals lovingly call the “Green Venice.”

The French geological survey released a study in June concluding that the project would have a “limited impact” on aquifer levels in the winter, and in the spring and summer, it could even increase watershed levels.

But hydroclimatists like Florence Habets point out that the survey used old data and did not take into account multiyear droughts heralded by climate change. And the official study on how much water can be taken from the Deux-Sèvres region’s rivers and aquifers, without negatively affecting the environment, is being done only now.

“The groundwater is the tap of the wetland,” says Julien Le Guet, using a traditional wooden pole called a pigouille to paddle a boat through the thin canals of the Marais Poitevin. “Instead of the groundwater replenishing the marsh, the marsh will replenish the groundwater.”

Mr. Le Guet has been a boat guide here for 14 years. He speaks lyrically about winter rains, when the trees grow right out of the rising lake, and despairingly about the recent drops in water levels. His love for the place propelled him to create a major oppositional group called Bassines No Merci — Reservoirs, No Thanks.

But the government response has been to charge forward.

Days after the last protest, a neighboring region announced it would build 30 large reservoirs.

“That’s why we have to continue fighting this battle,” said Mr. Le Guet, 45. “So the national plan to build basins does not proceed.”

Schisms have already formed between the farmers themselves, the intended beneficiaries of the basins. Smaller vegetable growers, who use comparatively minimal water, say they should not have to shoulder the burden of agro-industrial farms, 30 of which swallow one-third of the area’s total irrigation allotment.

“Why should I pay for the research when I will never get water from it?” said Olivier Drouineau, an organic farmer who grows vegetables over 4.5 hectares. “It profits only the biggest farms.”

A recent survey of cooperative farmers revealed only 10 percent had reduced their pesticide use. As a result, a handful of environmental groups that initially supported the project have since denounced it as an “irrigation development program.”

Walking through a strip of flowering plants he grows to feed bees, Mr. Petorin, the grain farmer, said it was too early to expect a reduction in pesticides or other changes, after years of delays caused by protests and legal challenges. “This is a reciprocal agreement,” he said.

Construction on another reservoir, about a half-mile from his farm, is scheduled to begin in March. Mr. Petorin worries that the protests and expensive acts of sabotage will continue.

After so many years of consultations and discussions, the idea of needing gendarmes to protect holes of water seemed “not normal,” he said, “because there are people who want to break it all.”

Mr. Le Guet said his group was already planning its next protest.