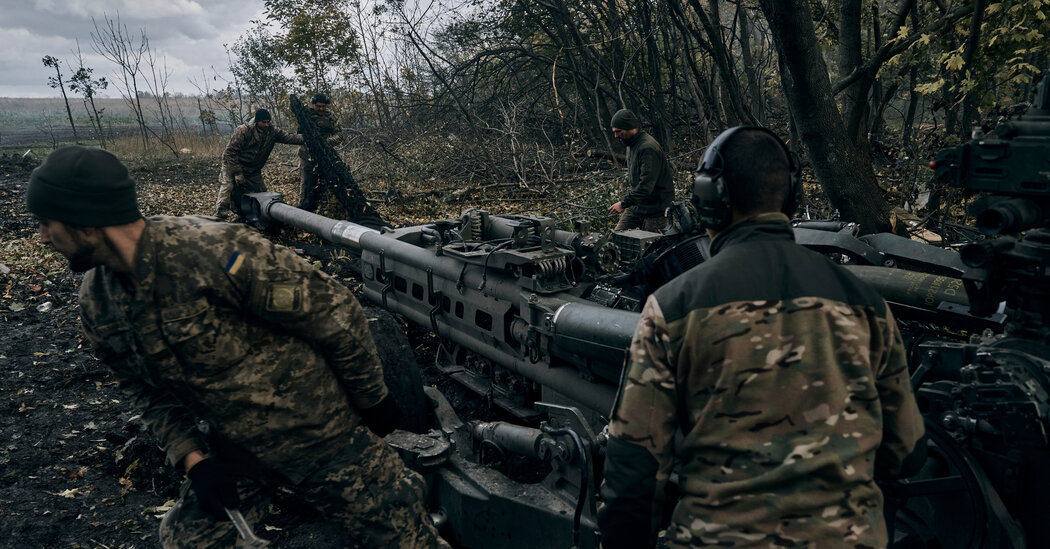 WASHINGTON — Ukrainian troops fire thousands of explosive shells at Russian targets every day, using high-tech cannons supplied by the United States and its allies. But those weapons are burning out after months of overuse, or being damaged or destroyed in combat, and dozens have been taken off the battlefield for repairs, according to U.S. and Ukrainian officials.

A third of the roughly 350 Western-made howitzers donated to Kyiv are out of action at any given time, according to U.S. defense officials and others familiar with Ukraine’s defense needs.

Swapping out a howitzer’s barrel, which can be 20 feet long and weigh thousands of pounds, is beyond the capability of soldiers in the field and has become a priority for the Pentagon’s European Command, which has set up a repair facility in Poland.

Western-made artillery pieces gave Ukrainian soldiers a lifeline when they began running low on ammunition for their own Soviet-era howitzers, and keeping them in action has become as important for Ukraine’s allies as providing them with enough ammunition.

The effort to repair the weapons in Poland, which has not previously been reported, began in recent months. The condition of Ukraine’s weapons is a closely held matter among U.S. military officials, who declined to discuss details of the program.

“With every capability we give to Ukraine, and those our allies and partners provide, we work to ensure that they have the right maintenance sustainment packages to support those capabilities over time,” Lt. Cmdr. Daniel Day, a spokesman for the U.S. European Command, said in a statement.

When the ammunition for Ukraine’s Soviet-era guns, which fire shells 152 millimeters in diameter, grew scarce shortly after the invasion, NATO-standard howitzers that fire 155-millimeter shells became some of Ukraine’s most important weapons, given the vast stockpiles of compatible shells held by Kyiv’s partners.

The Pentagon has sent 142 M777 howitzers to Ukraine, enough to outfit about eight battalions, the most recent tally of U.S. military aid to Ukraine shows. Ukrainian troops have used them to attack enemy troops with volleys of 155-millimeter shells, to target command posts with small numbers of precision-guided rounds and even to lay small antitank minefields.

Both Russia and Ukraine have struggled to meet the demand for artillery ammunition on the front. Russia has turned to North Korea for ordnance, and Ukraine has requested more shells from its allies.

The United States has shipped hundreds of thousands of rounds of 155-millimeter ammunition for Ukraine to fire in the largest barrages on the European continent since World War II and has committed to providing nearly a million of the shells in all from its own inventory and private industry.

Ukrainian forces have also received 155-millimeter shells from countries besides the United States. Some of those shells and propellant charges had not been tested for use in certain howitzers, and the Ukrainian soldiers have found out in combat that some of them can wear out barrels more quickly, according to U.S. military officials.

After the damaged howitzers arrive in Poland, maintenance crews can change out the barrels and make other repairs. Ukrainian officials have said they would like to bring those maintenance sites closer to the front lines, so that the guns can be returned to combat sooner, the U.S. officials and other people said.

The work on the howitzers is overseen by U.S. European Command in Stuttgart, Germany, but may soon fall under a new command that will focus on training and equipping Ukrainian troops.

“It’s not altogether surprising that there are maintenance issues with these weapons,” said Rob Lee, a military analyst at the Foreign Policy Research Institute. “They didn’t get a full training package for them and then were thrown into the fight, so you are going to get a lot of wear and tear.”

The Western artillery weapons provided to Ukraine, in the form of rocket launchers and howitzers, have sharply different maintenance needs. Of the former, HIMARS vehicles need little work to keep firing their ammunition, which is contained in pods of pre-loaded tubes. But howitzers are essentially large firearms that are reloaded with ammunition — shells weighing about 90 pounds each — and fired many hundreds or thousands of times, which eventually takes a toll on the cannon’s internal parts.

The nature of the artillery duels, in which Ukrainian crews often fire from extremely long distances to make Russian counterattacks more difficult, places additional strain on the howitzers. The larger propellant charges required to do that produce much more heat and can cause gun barrels to wear out more quickly.

Currently, Ukrainian forces are firing 2,000 to 4,000 artillery shells a day, a number frequently outmatched by the Russians. Over time, that pace has caused problems for Ukrainian soldiers using M777 howitzers, such as shells not traveling as far or as accurately.

Some of the issues can be traced, in part, to the howitzer’s design. Built largely with titanium, which is lighter than steel but just as strong, the weapon is easier to move on the battlefield and quicker to set up than earlier guns — a clear advantage for the United States when it began using the M777 in Iraq and Afghanistan in the early 2000s.

In those wars, unlike in Ukraine, the M777 was generally used to fire small numbers of shells in support of troops.

The United States did, however, get a glimpse of what might happen to Ukraine’s M777 howitzers five years ago, during the campaign to defeat the Islamic State.

In 2017, a Marine artillery battery from Camp Lejeune deployed to Syria with four M777 guns and fired more than 23,000 rounds of 155-millimeter ammunition in five months of supporting combat operations in Raqqa — nearly 55 times what a typical battery of that size would normally fire in a year of peacetime training.

As a result, three of the battery’s howitzers had to be removed because of excessive wear over the course of that deployment and were replaced with guns held in reserve in Kuwait.

When one of the howitzers went down, the others simply fired more, an option the Ukrainians are forced to choose daily.