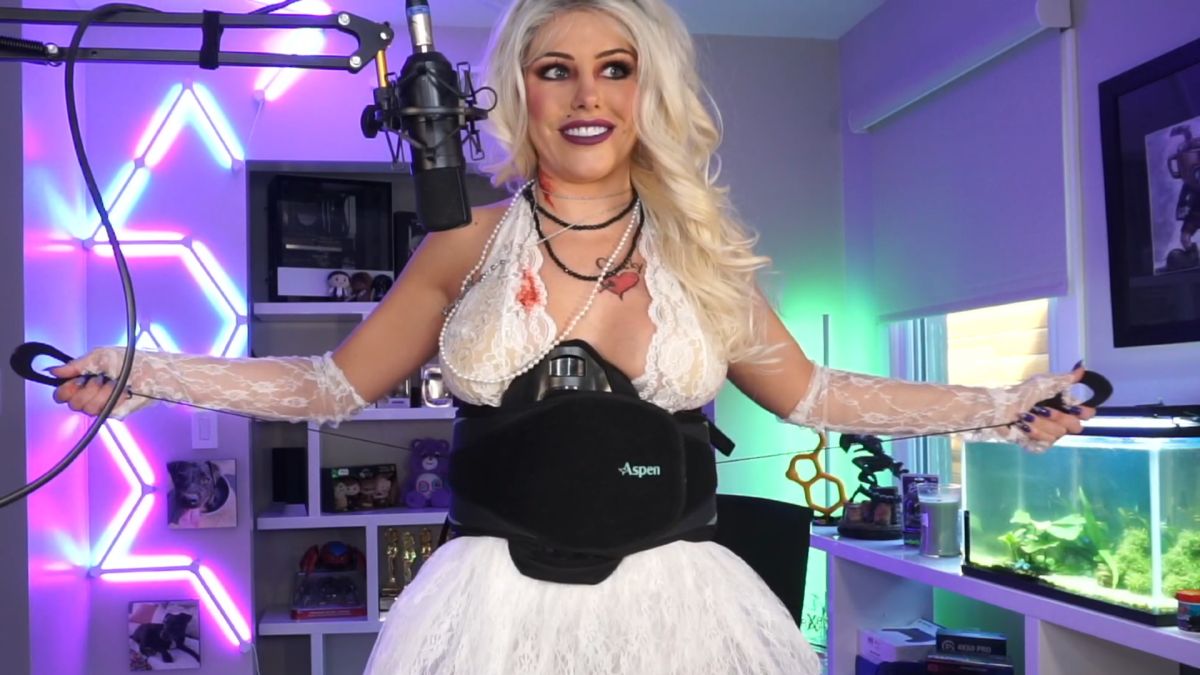 Three weeks after breaking her back at TwitchCon, Adriana Chechik has shared details of her recovery in her first stream since the incident happened.

For anyone out of the loop, TwitchCon San Diego happened earlier this month. It featured a foam pit where streamers participated in Gladiator-style battles, attempting to knock each other off foam platforms. It sounds fun, but it turns out it was less of a ‘pit’ and more of a ‘single layer of foam cubes lining a concrete floor’ type situation. This was unfortunately discovered by Chechik when she went to celebrate her victory with a cheerleader’s toe touch off the platform. She landed on her tailbone, breaking her back in two places.

In the weeks since, Chechik has been offering some updates on Twitter. Several surgeries—one of which lasted over five hours—revealed that she had “more fusions than expected, bones completely crushed” and “nerve damage” to her bladder. She returned home a week later, writing on Twitter how “the thing that sucks the most about this is you always just feel pain. Walking is painful, but just laying down is painful, sleeping is painful, legit nothing is without pain.”

With her first return stream to Twitch after the incident at TwitchCon left her with a broken backAdriana Chechik revealed she found out she was pregnant once visiting the doctor, she could not keep the kid due to the surgery she had to undergo pic.twitter.com/iLEcD2zvt1October 30, 2022

Now, Chechik has made her first appearance on Twitch since the foam pit incident. Dressed up as Bride of Chucky, she revealed how she was feeling post-surgeries and almost a month into recovery. “I’m out of breath, if you can’t tell I’m already out of breath,” she said. “I get out of breath holding my phone, everything.” She also showed off her surgery scar, saying the surgeons “did an amazing job,” adding: “the stitches are inside because I’m a model.” She later posted a picture of it to Twitter, confirming that the scar was around 11 inches.

Chechik also revealed that she discovered she was pregnant during the surgeries but was unable to keep the baby due to them. “I don’t care, everyone’s gonna know but I was pregnant,” she said during her stream. “I didn’t find out until I was in the hospital, so I also have, like, crazy hormones. I’m not pregnant anymore, because of the surgery I couldn’t keep it. But my hormones are just also through the fuckin’ roof because of that.”

Understandably, the stream was absent of any mentions of lawsuits against Twitch or Lenovo, who were operating the foam pit at the event. Anything that’s currently going on will likely be happening behind closed doors, and there’s a chance we’ll never hear anything at all if a settlement is reached early on. Twitch has not commented on the incident since it happened, and Lenovo has been quiet since it gave a fairly vague comment to Rolling Stone during the event to say it was “aware of the incidents” and had closed the booth.