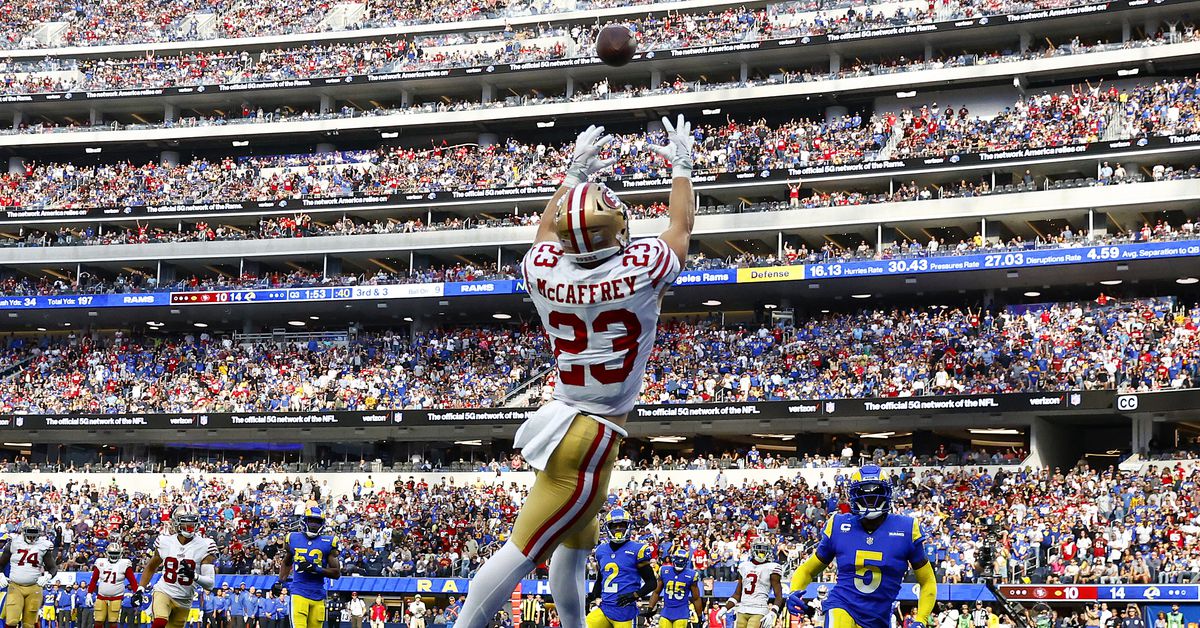 After the San Francisco 49ers traded for running back Christian McCaffrey, there was a question over how quickly Kyle Shanahan could get his new offensive weapon incorporated in the 49ers’ offense. McCaffery played just 23 snaps in his debut with San Francisco in a loss to the Kansas City Chiefs last week, catching a pair of passes and running 8 times for 38 yards.

What a difference a week makes.

In San Francisco’s win over the Los Angeles Rams, McCaffrey became just the fourth player in the modern era — and just the 11th in professional football history — to run for a touchdown, throw for a touchdown and catch a touchdown in a single game. LaDainain Tomlinson, David Patten and Walter Payton were the other three players who accomplished that feat, and seven more professional players pulled off that trifecta before the AFL/NFL merger in 1970.

Tomlinson was the most recent player to accomplish this, back in 2005 against the then-Oakland Raiders.

Interestingly enough, McCaffrey’s first of the three scoring plays came with him as a passer. Early in the second quarter, with San Francisco facing a 2nd and 8 in Rams’ territory, McCaffrey went in motion towards the right and then pulled in a backwards pass from quarterback Jimmy Garoppolo. After taking a few steps forward to sell the defense, he pulled up and hit Brandon Aiyuk, wide open and streaking towards the end zone:

The touchdown tied the game at seven, but McCaffrey was just getting started.

McCaffrey’s second scoring play came as a receiver, and required a bit of improvisation from the new member of the 49ers. With San Francisco facing a 3rd and 2 on the Rams’ 9-yard line late in the third quarter, McCaffrey again went in motion towards the right side before the snap. This time, he lingered near the line of scrimmage as an outlet option for Garoppolo, but when the quarterback was pressured in the pocket, McCaffrey released upfield, and into the end zone. Garoppolo spotted him and let it fly:

Fly is what McCaffrey did on the other end, going up to snare this throw with two Rams defenders closing in on him. As you can see from the end zone angle, this is an impressive display of athleticism from McCaffrey:

McCaffrey would complete his touchdown triple crown early in the fourth quarter, plunging into the end zone from a few yards out to extend San Francisco’s lead:

After the game, 49ers players and coaches had high praise for their newest teammate:

“The throw was alright. The catch was a lot better.”

— Jimmy Garoppolo on his nine-yard TD to Christian McCaffrey. He said McCaffrey wasn’t really part of the read, but used his instincts to make a play.

The idea to use McCaffrey as a passer was traced back to San Francisco tight ends coach David Fleury, who sent a clip of McCaffrey throwing a touchdown to Shanahan earlier in the week:

An idea was born

With San Francisco’s win, the 49ers improved to 4-4 on the year as they head into their bye week. It also brought into focus just how much McCaffrey will be a part of this offense going forward. Not only did he lead the 49ers with those 18 rushing attempts, but he was the receiving option targeted most by Garoppolo, as McCaffrey’s nine targets led all San Francisco receivers.

Here’s another way to look at McCaffrey’s usage against the Rams:

Christian McCaffrey was back to a bell-cow role after a week to prepare for a game with the 49ers.

If this is what Shanahan was able to design for him in just McCaffrey’s first full week with the team, imagine what we can expect to see after the 49ers bye week.