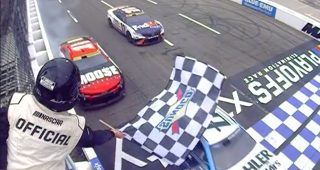 When Ross Chastain crossed the start/finish line under the white flag Sunday at Martinsville Speedway, he sat below Denny Hamlin by two points on the elimination line for the Championship 4. The driver of the No. 1 Trackhouse Racing Chevrolet pulled the move of a lifetime as he went full speed into Turns 3 and 4, rode the wall around around the final corner and gained enough points to surpass Hamlin on the elimination line and punch his title ticket to Phoenix.

The exhilarating move saw Chastain get around Chase Briscoe, Bubba Wallace, William Byron and Joey Logano before beating Hamlin to the stripe at the checkered flag.

“Played a lot of NASCAR 2005 on the GameCube growing up. I never knew if it would actually work,” Chastain said after the race. “I grabbed fifth gear and asked off Turn 2 if we needed it and we did. I just made the choice and full committed.

“I hope everybody remembers like two years ago, I was out here seven laps down and now with Trackhouse, I cannot believe that we have a chance to go fight for a championship.”

This story will be updated