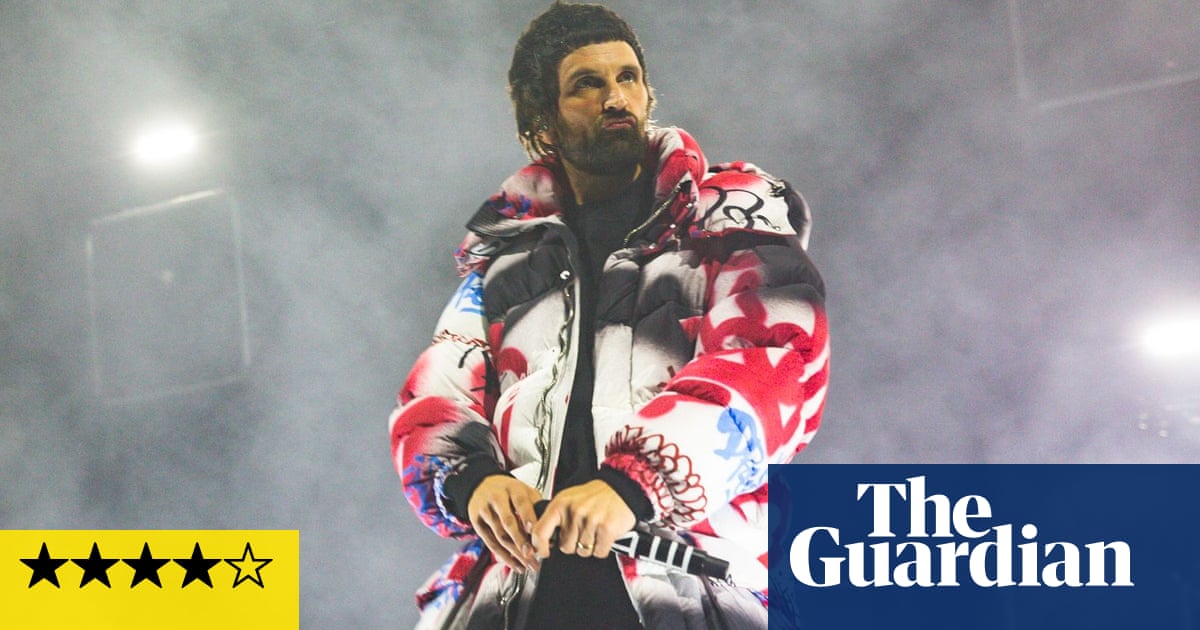 When Kasabian sacked their singer, Tom Meighan, the day before he was convicted for assaulting his partner, bandmate Serge Pizzorno stepped up from the ranks as a readymade replacement. The dark-featured, bearded guitarist has always been pivotal to the band’s image and joie de vivre, and his 2019 solo album and tour gave him a chance to test out his skills as frontman.

Here, the man who once scored a perfect volleyed goal on live TV while wearing winkle-picker shoes isn’t fazed by the prospect of facing a vast arena. He bounds on in an outsize, graffiti-covered parka of the sort that Liam Gallagher might reject as being over the top. Rocket Fuel – from the band’s latest album, The Alchemist’s Euphoria – brings the noise, a trademark mix of Prodigy-ish beats and Oasis swagger to tee everyone up for the weekend. “Manchester, it’s Friday!” Pizzorno cries. “Give me a mosh pit!”

The coat comes off after three songs, and the frontman reverts to his old self: black-clad, guitar strapped on, singing a little more nasally than his predecessor. But he still packs enough charisma to say things like “Everybody raise your hands to the sky!” without sounding silly.

Although Kasabian’s hooligan electro bounce isn’t for everybody, they are a fearsome live act. Drummer Ian Matthews peppers the electronics with thunderous percussive fills and bassist Chris Edwards brings the funk, meaning Club Foot, Underdog and Shoot the Runner sound raucously incorrigible. The band’s core sound has remained constant in two decades but they have added influences ranging from psychedelia to hip-hop. New song Scriptvre mixes soft rock and mainstream pop, while guitar anthem Bless This Acid House sounds like a duffed-up Stereophonics.

The show recognises the requirements of arenas. Pizzorno isn’t too proud for cliched “Left side make some noise!” routines, while the outfit of their new guitarist, Rob Harvey – a Grim Reaper-type hooded black coat – has a theatrical aspect. You’re in Love With a Psycho segues into Daft Punk’s One More Time, and a dip into the Stone Roses’ Waterfall during an acoustic version of Processed Beats delights the Manchester audience. The pace only drops slightly during an acid rock section. Pizzorno’s walk into the seated areas is fiendishly timed to liven up Treat, one of their more workaday numbers.

Empire becomes a gigantic massed chant and the singer claims: “The vibe tonight is the best I’ve ever seen.” He mentions the state of the country before suggesting that LSF (Lost Souls Forever) is a chance to “forget all the shit and pain, and be together”. The song’s chorus – “We’ve got our backs to the wall” – has never sounded so powerful. By the time they reach an absurdly epic Fire, crowd scenes of writhing bodies, topless males and jostling mosh pits resemble something from ancient Rome. Kasabian’s own empire seems as strong as ever.