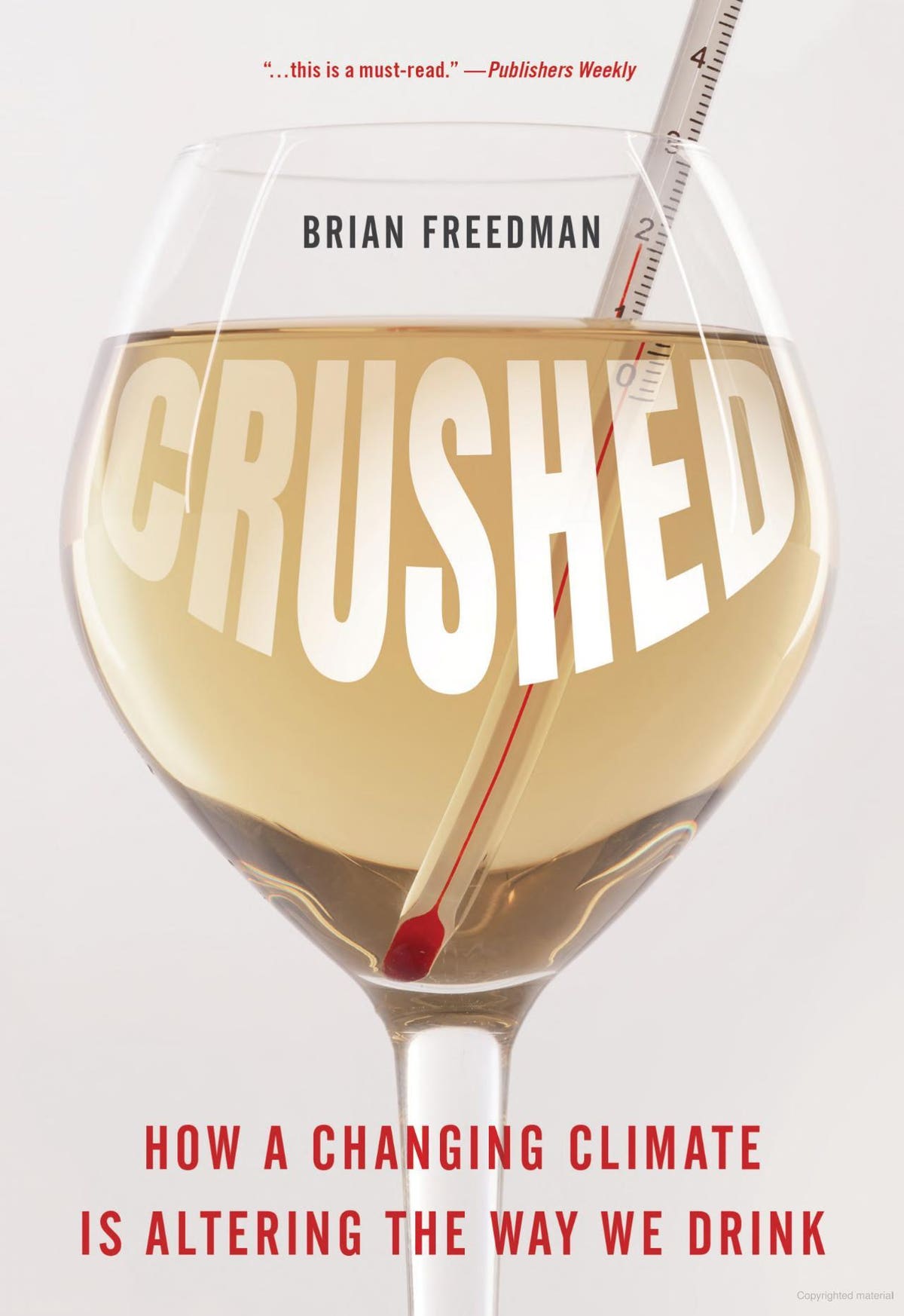 Whether wine lover or neophyte, anyone paying attention to the news these days knows the wine industry has suffered a series of blows. Wildfires in Australia and California, even Bordeaux; heat and drought from Germany to South Africa, sporadic then heavy rains from New York to Virginia; these wild and intense weather patterns make it not only hard to farm and produce a healthy crop—for wine is agriculture—but they change the style of wines we’ve come to know and love as a result.

Brian Freedman, author of the new book “Crushed: How A Changing Climate Is Altering the Way We Drink,” not only covers the various ways climate change is altering wine but discusses the promising adaptions and technologies that leaves readers with a glimmer of hope.

What inspired you to write a book about climate change and wine? In the introduction, you describe staying at a hotel in Napa when fire hit the region. Tell us more about your thought process.

Over the years, the subject of climate change would come up with more and more frequency whenever I had the chance to speak with grape growers and winemakers. So, while the fire that roared to life when I was there ended up being the catalyst for this book, the subject had been percolating for years.

What do you think is the most alarming aspect of climate change and wine?

Julie Kuhlken, of Pedernales Cellars in Texas, told me last autumn that it’s not so much about global warming as it is global weirding. She’s right. Increasing temperatures are an issue—and in some places, like Southeastern England, which I cover in the book, it’s not entirely a bad thing. However, it’s the other effects that count as well: freak frosts, brutally damaging hail, wildfires, droughts, and more.

Even the rains are changing. A number of producers from England to South America told me that the rains they’re seeing are more intense than they’ve ever noticed before, leading to soil erosion, floods, and more. All of this is making it harder to reliably keep these businesses thriving year after year.

So often the consumer perception of anyone who makes wine is that winemakers are heavily capitalized and have enough money to not to worry about this sort of thing. But climate change is challenging even the biggest players, and for the smaller ones, who in normal times aren’t backed by enough money to ride out more than a handful of bad vintages in a row, these are terrifying times. The jobs at risk, the livelihoods, the lifetimes of work…it’s really scary.

While researching the book, have you found reasons for optimism?

No one generally goes into the wine or spirit worlds because they have to; they tend to go into them because they want to. The grape and grain growers and winemakers and distillers I spoke with are some of the smartest, most passionate people I’ve ever been fortunate enough to meet, and they will likely play major roles in helping us find ways to pivot and continue thriving, even in the context of drastic climate change.

One particularly heartening visit was to the Israeli producer Tabor. I had the good fortune to spend a day with the legendary agronomist Michal Akerman, who has become a leader in nurturing healthy ecosystems in vineyards in Israel, and both her wines and wines around the country keep getting not just more delicious, but more and more expressive of the incredible range of terroirs that they’re planted in. It’s a win-win.

Have you noticed the wines you enjoy changing in a way you think is attributable to climate change?

Wine, like fashion and music and film, runs in stylistic cycles. For years, high-octane wines with lots of oak and alcohol were the most lauded, but now popular tastes have shifted towards freshness and finesse, pulling many of those wines to a less full-throttle style. Ironically, hotter vintages lead to bigger wines: more ripeness means more sugar which leads to more alcohol, unless techniques and technologies are employed to diminish that, which is a whole separate conversation.

What I’ve noticed more than anything else, and that is directly attributable to climate change, is the variation in how much or—frighteningly—how little wine may be produced in a given year, either as a result of frost damage early in the season, hail during development, fires or floods close to the harvest, or something else entirely.

Do you think most consumers are aware of the impact of climate change on wine?

For a long time, climate change’s impact on our food system took center stage. Today, with horribly dramatic reports of droughts and fires and frosts and more, I think that more consumers are aware that climate change is affecting wine. And as more consumers are exploring different types of wine, there seems to be a growing awareness of the people who shepherd this amazing liquid from the grapes to the glass, which creates a sense of connection and empathy.

This highlights the fact that wine is an agricultural product that is subject to changes in the climate, and will only help drive this point home more, and hopefully lead consumers to increasingly support the producers who are growing their grapes and making their wines in the most responsible ways possible.

What can eco-conscious consumers do to help?

A friend of mine recently pointed out that we’re all told that to make a difference with climate change, we should buy expensive electric or hybrid cars. Personally, as much as I’d absolutely love, say, a new Tesla, that’s not in the budget right now. But by purchasing a $25 bottle of wine from a producer that farms responsibly and makes their wine in an environmentally friendly manner, I can still have a positive impact. So, I’d say this: Support the producers who are supporting the planet. It’s impossible to overstate the importance of that.

Crushed: How A Changing Climate Is Altering the Way We Drink, by Brian Freedman, Published by Rowman & Littlefield, October 11, 2022