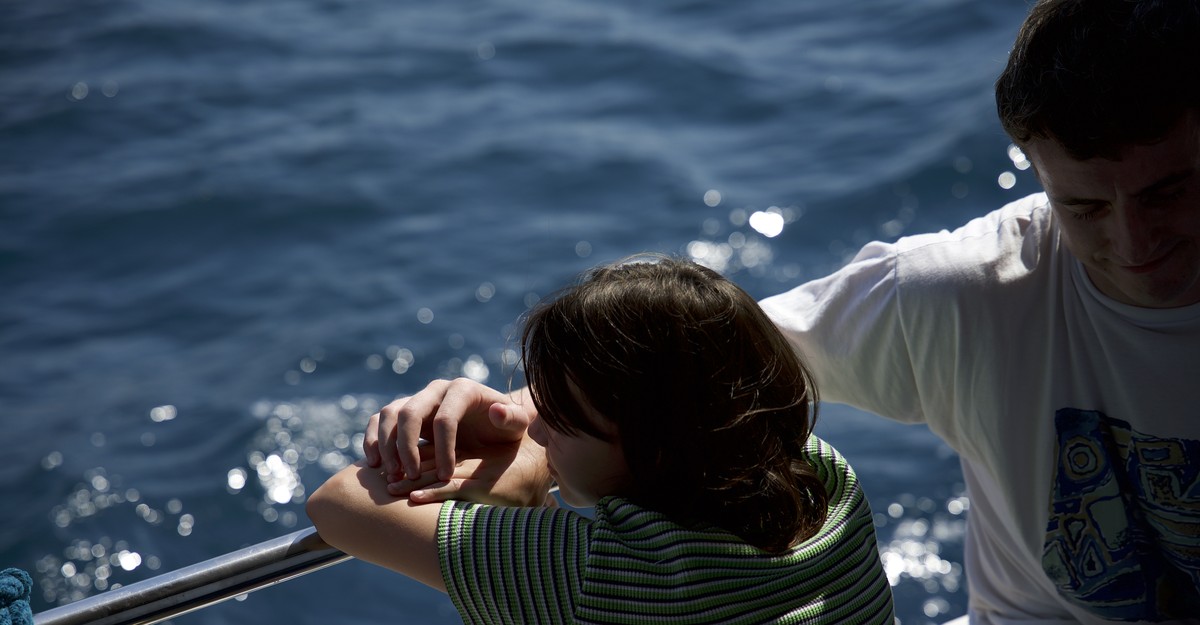 When the writer-director Charlotte Wells began conceiving of Aftersun, her exquisite debut feature, she didn’t plan to unravel a parent-child dynamic. She simply wanted to observe how any conventional relationship can shift in a new place—so she situated her characters in a resort, outside of their regular routines. But as she looked, for research, through old photo albums of her and her father on holiday, she couldn’t stop thinking about the way her feelings about him had changed since her adolescence. The connection between a parent and a child “has a huge impact on who you are,” she told me earlier this month. “There’s no …” She paused. “I think very few people have a straightforward interpretation of that relationship.”

Aftersun, now in select theaters and streaming later this year on Mubi, certainly isn’t told in a straightforward manner. The film follows a young father, Calum (played by Normal People’s Paul Mescal), and his 11-year-old daughter, Sophie (the newcomer Frankie Corio), who are spending a week-long vacation on the coast of Turkey. Sophie treasures her time with Calum, who doesn’t live in Scotland with the rest of her family and who, at 31, with boyish features, is often mistaken for her older brother. This vacation is framed through the perspective of present-day Sophie (Celia Rowlson-Hall), who appears occasionally throughout the movie. Now an adult, she’s sifting through her memories, hoping to better understand the man she was so dazzled by a lifetime ago. Some of those memories are reliable, documented on camcorder footage from their trip. Others seem to be imaginary. What’s clear is that Sophie can’t shake their week in Turkey. The film is sparing in its details, but it implies that this trip was the last time she saw her father.

Thus, Aftersun is a hazy reminiscence, a depiction of a child trying and failing to fully know a parent. Take one of the first scenes: Calum, seen through the camcorder, bristles when young Sophie asks him where he’d hoped to be when he turned 31. He tells her to stop recording, but she takes his reaction lightly, joking that she’ll just have to store his answer on her “little mind camera.” The adult Sophie, however, absorbs this footage in pained silence. She’s now aware that her father had vulnerabilities, though she still can’t identify exactly what they were.

Read: Why is dad so mad?

Wells, whose father died when she was 16, has called the film “emotionally autobiographical.” But when I brought up her wording, she cringed. “That phrase truly haunts me,” she said. “It came up as a way to avoid ever answering this question” about how personal the film is. The comparisons make sense—she and Corio look incredibly similar, after all—but Aftersun isn’t really autofiction, Wells said. The film plumbs the same feelings she has toward her own dad (as did her short film Tuesday), but it also renders a universal, if abstract, experience: reconciling your childhood impression of your parents with who they really are.

If we’re lucky to grow up with parents or close guardians, we build our portraits of them first in broad strokes of primary color. They’re defined in relation to us; they’re the most important adults in our still-small world. Over time, that portrait turns into a mosaic. We see them in different contexts, around different people. We stop depending on them; we grow up—maybe even face some of the same challenges they did. And yet, envisioning who they were without us can still be difficult.

Aftersun takes on that profound challenge with graceful imagery, technical precision, and fine-tuned performances from Mescal and Corio. “I am interested in exploring the unknowability of ourselves and the people closest to [us],” Wells explained. “I think, even as you grow older, it’s hard to see your parents as people. You have a greater empathy for them … But they’re still your parents.” Trying to understand anyone, the film posits, is an act of love. When a child tries to understand a parent, it’s the deepest kind of love there is.

Many scenes in Aftersun feature little to no dialogue, and that restraint proves essential. Wells prioritizes mood, treating every beat’s pacing as “a delicate thing,” and her screenplay is packed with subtle camera movements rather than expository conversations. Scenes of Calum alone, for instance, come with unexpected angles—the camera peers up at him on a balcony railing or zooms in uncomfortably close as he breathes with a wet towel on his face—and many of them are cut short. Their strange brevity underscores the adult Sophie’s discomfort. She’d rather not think too deeply about Calum’s behavior when she wasn’t around.

Scenes of them together come with odd compositions as well. When Sophie and Calum chat over dinner after being photographed with a Polaroid, Wells drifts away from their conversation to instead focus on the picture developing beside Sophie’s elbow. The lens lingers longest on seemingly inconsequential details—paragliders dotting the cobalt Turkish sky, the shimmering surface of a pool—to capture the way memory tends to work: The fragments that stick with us aren’t always the most obvious ones. “It’s not about a nice, perfectly composed shot,” Wells said. “We were never shooting for beauty.”

Yet one truth emerges again and again: No matter what despair Calum was trying to hide from his daughter, he loved her. The film never reduces Calum to an idea or to a stereotype of an absentee father; he’s a persistent, specific part of Sophie’s memories. As a child, she registered his care—the time he quietly removed her sneakers as she fell asleep, his patience as he taught her tai chi moves, his gentle reminders that she can talk to him about anything. Twenty years later, Sophie is recognizing the complications that came with that care—the way he avoided her questions about how he broke his arm, the flicker of recognition that crossed his face when she told him she was feeling “tired and down,” his anguish over how much a new pair of goggles would cost. She sees, only after growing up herself, that his instinct to shield her was both an expression of love and the reason for his emotional distance.

Read: There is no road map for the longest phase of parenthood

Aftersun emanates a sweet sadness. In recalling his presence, Sophie feels her father’s absence, yet only by delving so deeply into the past can she feel the intimacy they shared. Wells illustrates that tension in a series of striking, surreal sequences set at a rave. The adult Sophie imagines picking her way through a crowd toward a dancing Calum, struggling to reach and hold on to him. These scenes are lit by a flickering strobe that breaks up their movements and forces the viewer to join Sophie, to fill in the gaps between images alongside her, in order to develop a full picture. Aftersun understands that closing the inevitable distance between yourself and the ones who raised you is a never-ending pursuit. But every step is a powerful chance to dance with the impossible.