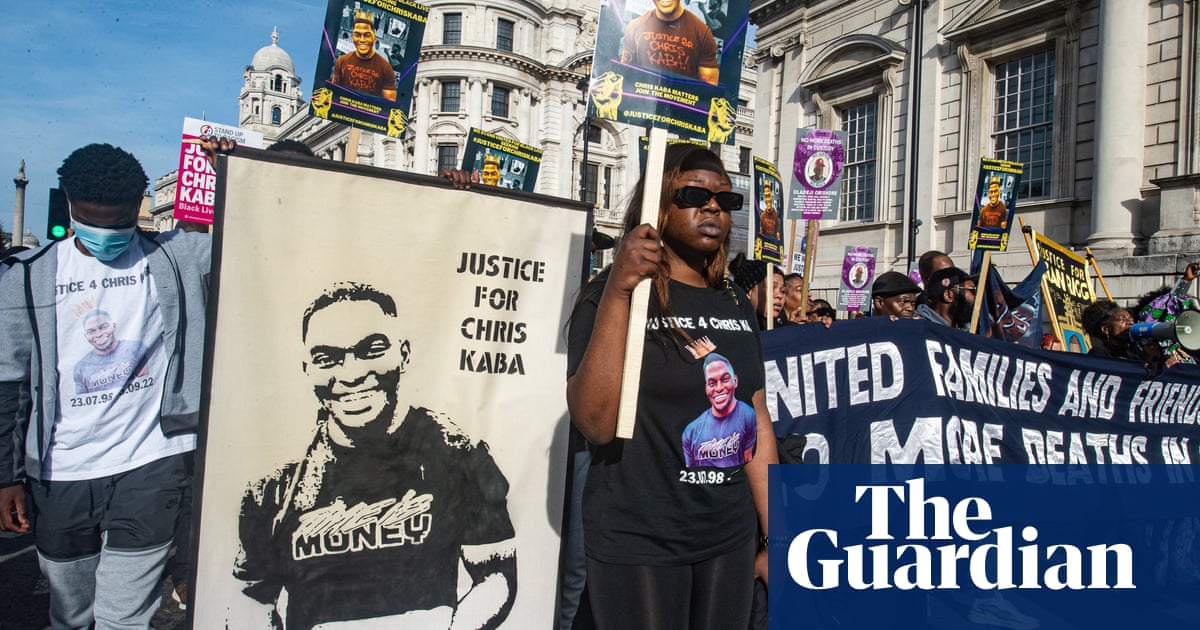 The grieving families of Chris Kaba and Oladeji Omishore joined the United Friends and Families Campaign (UFFC) march on Saturday afternoon, their presence swelling the numbers of London’s most solemn annual protest.

Each October for the past 26 years, relatives of men and women killed in police custody, and their supporters, have marched from Trafalgar Square to Downing Street to call for justice and accountability for their loved ones.

For the relatives of Chris Kaba, it was the first time. Jefferson Bosela, Kaba’s cousin, and the family’s spokesperson since Kaba was shot by police in Streatham on 5 September, spoke at the opening rally in Trafalgar Square.

Bosela spoke of his cousin’s love of family and of how he was about to become a father before he was fatally shot by police. “Chris looked forward to welcoming his baby girl. He was excited and he was nervous, but more importantly, he understood what it took to make a good father,” Bosela said.

“He was followed by armed police officers without knowing, although he was unarmed. And he was pulled out of that car with a bullet in his head.”

“Every year there’s more and more and more new deaths,” said Brenda Weinberg, the sister of Brian Douglas, who co-founded the campaign 26 years ago. Douglas died in 1995 after he was struck in the head by police in Clapham, south London. No officer was disciplined or prosecuted in connection with the killing.

Relatives of the dead walked at the front of the slow march down Whitehall, amid chants of “No Justice; no peace” and “What do we want? Justice. When do we want it? Now.”

The relatives of Oladeji Omishore wore T-shirts bearing his face and name. His mother’s sister, who gave her name only as Bisi, said she had never heard of the UFFC march until after her nephew died.

Omishore plunged into the River Thames after he was Tasered by police while suffering a mental health crisis on Chelsea Bridge. The Metropolitan police initially falsely said Omishore had been holding a screwdriver when he was confronted by police. It turned out he was holding a lighter.

Others on the march were not directly linked to victims of deaths in custody. Roxy Legane, from Manchester, said she had come in solidarity with the grieving families. “I don’t believe that the police have any role in keeping us safe and protecting us, simply,” Legane said.

Kate Jennings, 39, from Leeds, said: “There seems to be more and more deaths that we are hearing about. I’m just appalled, it never seems to change.”

Finally, the march arrived at a stage set up facing Downing Street, where the crowd heard from more families. Several, including the relatives of Kaba and Omishore, went into Downing Street to deliver a letter to Rishi Sunak, the new prime minister.

Ajibola Lewis, whose son Olaseni, died in 2010 after he was restrained by 11 police officers at Bethlem hospital, after admitting himself as a voluntary patient, was among those listening. She shed tears at points, and hugged other mothers and relatives who passed by.

“You think you can’t hear anything worse, and each year it gets worse,” she said. “Nothing has changed. There has been no accountability. Year after year I come thinking things would get better. But they never get better.”

Weinberg said she was horrified to be marching again, for the 26th year, “and that it is still happening”. “How effective is it?” she asked. “We come, we grieve, we bare our souls and we go home, we wake up and it’s happened again.”