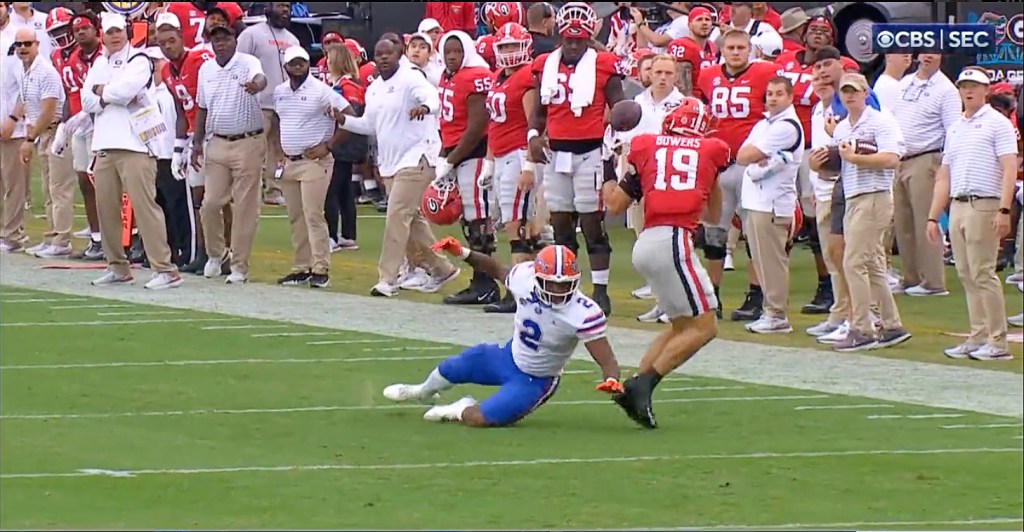 The Georgia Bulldogs don’t often need a lot of help winning football games, but they got some on Saturday afternoon in Jacksonville when what could’ve been Stetson Bennett’s second interception of the game became a 73-yard touchdown for star tight end Brock Bowers.

Already up 14-0, Bennett floated one down the sideline to Bowers that got tipped by Amari Burney, bounced off Burney’s helmet, and then into Bowers’ arms as he turned completely around to catch the bouncing ball as Burney fell to the ground. From there, it was nothing but green grass for Bowers as he jogged to the end zone to put the Dawgs up three scores.

There are certain plays that just indicate it isn’t going to be your day, and Florida was already dealing with all they could handle against the size of Georgia. Having what could’ve (and probably should’ve) been an interception to try and get back into the game turn into another Georgia touchdown was fairly demoralizing for the Gators and there weren’t a lot of smiling faces wearing orange and blue in Jacksonville after this one.

For Bowers, it’s another touchdown on his highlight reel as the true sophomore would very likely be a top 10 pick in the 2023 NFL Draft if he was eligible, but instead will spend another year tormenting opposing defenses in the college ranks before being a coveted player in the 2024 Draft.