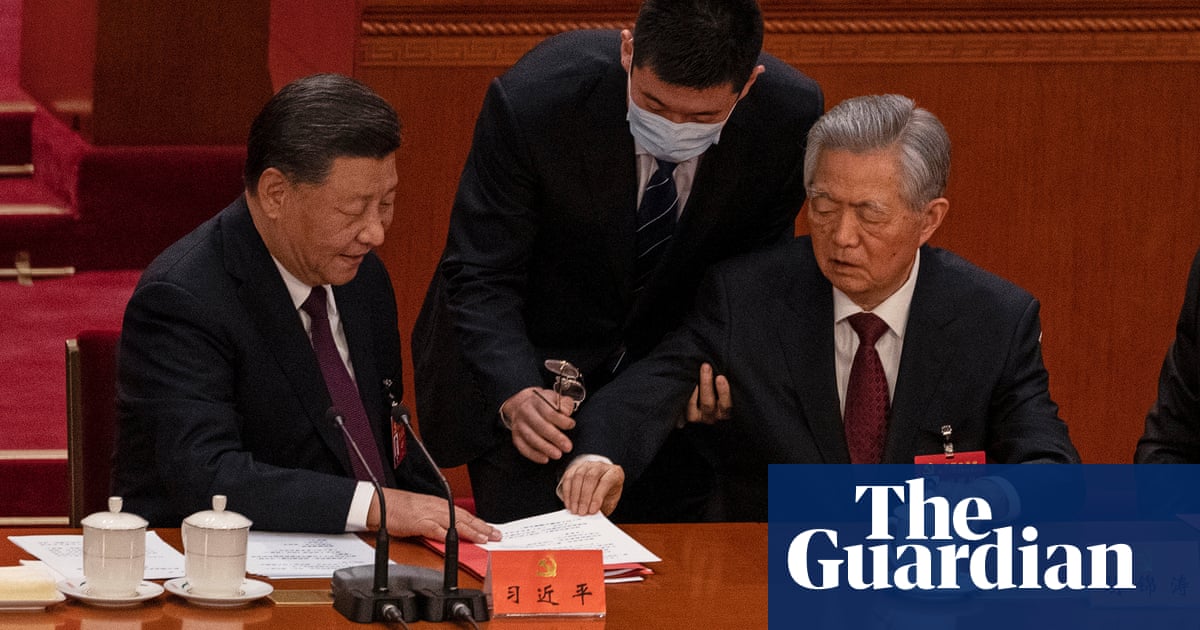 After eight days of China’s most important political meeting, in which the autocratic leader Xi Jinping’s precedent-breaking third term was confirmed, belligerent foreign policy reaffirmed, and the leader of the world’s largest population and second-largest economy announced through the next five years, one question was on everyone’s lips: what on earth happened to Hu Jintao and where is he now?

The drama happened on Saturday morning. In a short window between foreign media being allowed into Beijing’s Great Hall and the start of the final public meeting of the 20th party congress, the former Chinese leader Hu was physically removed from his seat next to his successor, Xi, and out of the Great Hall of the People.

It was a shocking scene from the Chinese Communist party’s notoriously opaque political environment and an event so controlled that even the refilling of teacups was choreographed. It sparked immediate and occasionally wild guesswork, which continued throughout the week.

Devoid of explanation, the imagery easily lent itself to the narrative of Xi’s extraordinary power consolidation, the deck-clearing of potential adversaries, and his abandonment of his predecessors’ vision for the CCP.

“Some people are surprised by the abnormality that is Hu’s disorderly exit, at what should normally be a very highly choreographed and orderly event,” said Sung Wen-ti, a political scientist at Australia National University’s Centre on China in the World. “That abnormality fuels speculations.”

Hu had attended congress as a member of the Presidium, a committee of party elders that oversees key congress processes and events.

According to available footage, Hu was escorted into the Great Hall on Saturday morning by a staff member and took his seat to the left of Xi. Shortly after foreign media were allowed to enter the hall, Hu looked at some papers in front of him on the table. An outgoing politburo member Li Zhanshu, to his left, appeared to try to stop him by taking the paper and returning it to a red folder, pushing it out of Hu’s reach. Xi appeared to call over a clerk and two staff took him away, gently lifting him out of his seat by his armpits. One picked up the folder and as the papers briefly flapped open, a photo by Spanish media reportedly showed it to be documents relating to the day’s proceedings, including the changes to the Politburo. Throughout, Hu appeared confused and unwilling, made a short unreadable comment to Xi, and patted China’s outgoing premier, Li Keqiang, on the shoulder as he exited.

Hu has not been seen in public since, although his son Hu Haifeng, a rising party official who was in the audience of 2,300 delegates, has appeared at formal events this week.

Global audiences have been told it was health-related. Xinhua News, the official state media, said on Twitter – which is banned in China – that Hu had been ill recently and was taken out of the room by concerned staff so he could rest. China’s ambassador to Korea said media reports had been “completely skewed”, and the elderly Hu “had to step outside for a break”.

Domestically, no one has been told anything. There were no results about it on Baidu, Bilibili, WeChat or Weibo. No state media reported on it. No recent posts about Hu or his son can be found on Weibo, although some video and comments were visible on Douyin – China’s domestic version of TikTok. Some users accepted the health explanation (“the foreign media are misinterpreting it,” said one). Others were suspicious (“If he feels unwell, others would take care of him, but seeing that he was stopped twice trying to open the red folder – this is so dark,” said another).

The incident has divided China watchers, with some convinced they witnessed a political purging, or at least a deliberate public humiliation, of the former president and leader of Xi’s rival Communist Youth League faction. Foreign Policy’s editor, James Palmer, noted that many of Hu’s former allies have gone this way. Bill Bishop, a China expert and author of the Sinocism newsletter, said if Hu had truly been purged from the CCP it would be odd for state television to then include Hu in news footage of the event – which they did.

Others say the explanations of innocuous health issues offered by state media were more likely. Hu is 79 years old and has been in visibly frail health for some time.

Jeremy Goldkorn, editor-in-chief of the China Project, a New York-based news website, thought the most likely explanation was health issues. “The one thing that some Chinese commentators have pointed out that we can be certain of is that these senior leaders, many of whom owed their careers to Hu, were unable to muster any humanity, warmth, or politeness to show Hu any respect or consideration of any kind,” Goldkorn said.

For some, the footage of Hu trying to read the documents – which wasn’t made public until some days after the event – suggested the factional leader might have been protesting, or about to protest, against the expunging of his last few proteges from the party’s senior ranks and was hustled out to avoid a scene.

“If you’ve watched the CNA video showing the minutes before [he was escorted out], I think the ‘confused and unwell guy’ explanation still makes the most sense,” Kaiser Kuo, host of the Sinica Podcast, said on Twitter. “The whole folder-fumbling. Like the kid who turns his SAT test over before start is announced.”

Sung told the Guardian he doesn’t think that would be Xi’s style. “Even if we entertain the notion that Xi purged Hu because Hu wanted to raise objections in public, Xi would have done that before foreign press were allowed into the room,” he said.

“A high-profile purge of Hu at a critical juncture like the 20th party congress shows the presence of dissent, and the notion that Xi is at least ‘challengeable’. Neither is great for Xi’s image of invincibility.”

Sung said Hu Haifeng’s visibility also pushed against the purge theory. “When [the CCP] purge someone they tend to purge the whole family, at least those family members who are in politics.”

As speculation continues, analysts said we are unlikely to get an official explanation, perhaps at best a very public and government-approved appearance some time soon. “Overexplaining shows weakness,” said Sung. “They will let the next public appearance by Hu do the talking.”

In an analysis piece this week, Rory Truex wrote in the Atlantic that one’s interpretation depended in part on one’s opinion of China’s political system. “Unfortunately, the speculation and rumour-mongering about Hu are a product of the secrecy of the party itself,” he said.