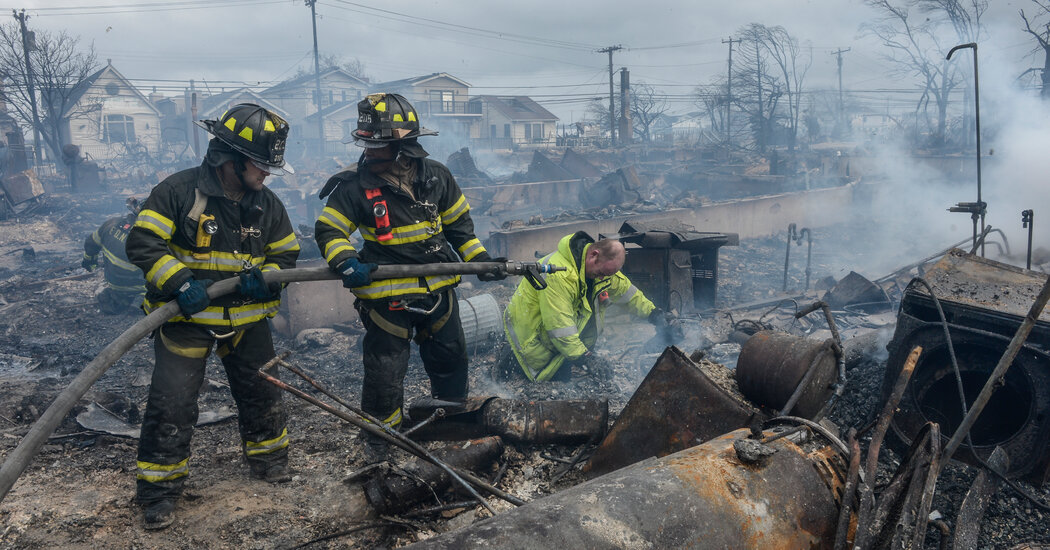 A climate event hits — Fiona, Ian, Sandy — and the wreckage is on a monumental scale. But it also strikes on a smaller, more intimate scale, in disrupted lives multiplied thousands of times over. How to measure the damage? In dollars or lost lives, certainly, or whole neighborhoods sunken in torrents of untamed water.

But also: a brother and sister huddling for warmth in an apartment without heat or electricity; a woman retrieving her furniture from her neighbor’s yard; a home aide helping a frail man onto an emergency cot; a rescue worker too fatigued to keep going, but keeping on anyway. When Hurricane Sandy hit New York City 10 years ago, leading to at least 43 deaths and an estimated $19 billion in damages, New York Times photographers fanned across the metropolitan area to document the devastated cityscape. But they also bore witness to the individual struggles of people trying to hang on to what they could.

The new normal was definitely not normal.

The city that the photographers ventured into during the storm and in the days afterward was not the one from a week earlier. Parts remained underwater or impassable. Whole areas were immersed in darkness. You could cross a block on Broadway in the mid-20s, and on one side, you would see a city without traffic signals, and on the other, one that appeared untouched by the storm. Everyone had a memory. Mine was of walking past a new apartment building, on the night of the storm, when a planter on a high terrace blew through the glass guardrail, showering pedestrians with glass splinters and the planter’s remains. My son’s was of hearing that two of his friends were killed by a falling tree.

Every corner of the city experienced a different storm, a different level of wrath — and a different recovery. Communities not often in the news — the Rockaways in Queens, Midland Beach in Staten Island, where residents described the storm surge in language typically reserved for tidal waves — cried out for attention. Times photographers arrived to find New Yorkers whose lives might never be the same.

Like other calamities, Sandy — and the efforts to rebuild afterward — left some of its deepest scars in vulnerable communities, exacerbating conditions of inequality that existed before the storm. New Yorkers with means could get out of the city, or move to hotels if their apartments were without power. But thousands of restaurant workers, store cashiers, home health aides and others who have since been recognized as “essential workers” often toiled at their jobs until the last minute of Sandy’s approach. Then they had to improvise their way home, arriving in neighborhoods where the disaster was already hitting. And the city’s police, fire, utility and emergency medical workers seemed to be everywhere.

Their images still have the power to unnerve us, even as the iconic pictures of damaged infrastructure become tamed through familiarity. Buildings could be replaced; lives could only be altered. Ten years after the waters receded, the human stories are still ongoing. The photos here tell some of those stories; others come back in unquiet memory. Who were the people who lived through the storm, and what did they look like at the moment when everything changed?

Along a jetty at Rockaway Beach, Queens, as Hurricane Sandy approached on Oct. 29.

A parking garage near Wall Street, flooded and covered with a layer of fuel, on Oct. 30.

A fire at a port facility in Sunset Park, Brooklyn, on Oct. 30.

Most of the buildings along the Avenue of the Americas in Lower Manhattan were without power.

Haley Rombi, 3, is lifted to safety in the Dongan Hills neighborhood of Staten Island on Oct. 30.

The boardwalk at Rockaway Beach on Nov. 1.

With supplies of basics like food and gasoline severely limited, New Yorkers waited in long lines like this one in Bedford Stuyvesant, Brooklyn, on Nov. 2. At one station the line extended for 30 blocks.

Days after Sandy, Christine Callan returns to recover items from her home in Staten Island.

The neighborhood of Breezy Point, in Queens, after a six-alarm fire when Sandy hit the city on Oct. 29. More than 100 homes were burned.

Volunteer groups set up tables at the Dry Dock Playground in Manhattan’s East Village across the street from the Jacob Riis Houses.

Kevin MacLachlan will not leave his home on Michigan Ave in Long Beach, N.Y. because he is worried about looting, November 2nd.

Volunteer Fabrizzio Avila, 15, has a cup of soup in Midland Beach on Staten Island on November 4th.

Joshua Valentin, 3, helps bundle his brother Johnny, 3 months, inside their apartment, still without power, in the Red Hook West complex in Brooklyn, before heading out with their mother to collect donated goods at a local church on Nov. 4.