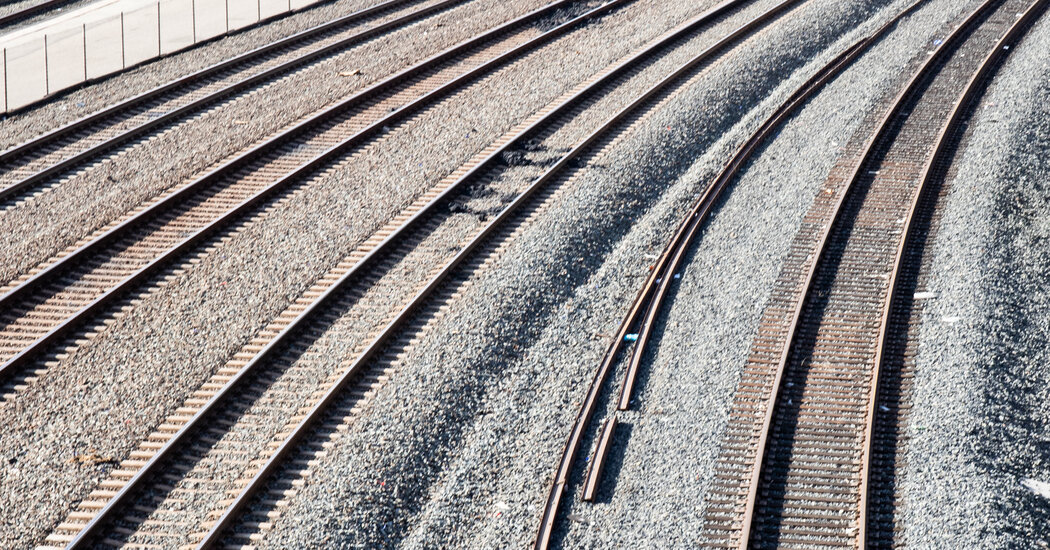 A dozen men stood in a parking lot outside a dilapidated motel in rural Texas, sharing a fish dinner cooked in a portable fryer. They had spent the previous 12 hours under a pounding sun, repairing track for a major American railroad.

The men were part of a traveling maintenance gang, a largely unseen force that plays a critical role in keeping rail freight rolling. They had driven from five to 13 hours to get here, from homes as far away as Louisiana, Mississippi and Oklahoma.

They were accustomed to the gnawing regrets of life on the road, regularly missing wedding anniversaries, children’s birthday parties and even the deaths of parents. They were used to cramming into motel rooms infested with bedbugs and rodents, working through bone-cold blizzards and punishing summer heat.

They were also conditioned to laboring when ill, because their union contract — which is now expired — included no short-term paid sick leave. Demands for paid sick leave had become the primary point of contention in negotiations over a new contract, the issue that threatened to prompt a strike by more than 100,000 rail workers.

The risk of a strike — a potential calamity for the American economy — had seemed to recede after a tentative deal announced by the Biden administration in September. In the weeks since, members of six of the 12 unions at the table voted to approve the deal. But the prospect of an impasse snapped back into focus this month, as the third-largest rail workers’ union, the Brotherhood of Maintenance of Way Employees Division, voted down the agreement, setting off a new round of negotiations.

On Wednesday, a smaller union, the Brotherhood of Railroad Signalmen, announced that its members had also rejected the deal.

Those results reflected seething anger among rail workers that the tentative agreement added only a single day of paid personal leave, perpetuating a grim choice between their health and their paychecks.

“There is the potential for a strike,” said the chief negotiator for the maintenance workers’ union, Peter Kennedy. “It’s an insane and cruel system, and these guys are fed up with it.”

Under an agreement between the unions and the railroads, no strike can happen before Nov. 19. Experts say a strike remains unlikely. Fresh negotiations could yield a more palatable deal. The White House could again step in to apply pressure toward compromise. Congress could impose a settlement.

Yet the possibility of a protracted dispute further straining the supply chain in the midst of alarming inflation reflects the sense of grievance among those who perform the often dangerous work of keeping goods moving.

The State of Jobs in the United States

Economists have been surprised by recent strength in the labor market, as the Federal Reserve tries to engineer a slowdown and tame inflation.

“The way the railroad treats us, their opinion seems to be that our lives belong to them,” said Michael Paul Lindsey II, an engineer in Idaho who drives freight trains for Union Pacific.

Beyond the railroads, 22,000 dock workers are facing off with the operators of West Coast ports on the terms of a new contract. Truck drivers have been quitting in droves. Warehouses denounce labor shortages, prompting many companies to accelerate plans to automate work.

Strikes have disrupted the port of Felixstowe, Britain’s largest container shipping terminal. Until a recent settlement, South Africa’s commodities exports were stymied by a series of strikes at major ports.

Trains move roughly two-fifths of American long-haul freight, carrying containers full of imported products, parts and raw materials from ports to warehouses and factories across the country. The railroads are a central element linking grain farmers across the Midwest to buyers in Asia.

The Association of American Railroads, which represents major carriers, has estimated that a strike would inflict economic damage reaching $2 billion a day.

Rank-and-file workers — who have been working without a contract since 2019 — note that they have endured perilous conditions during the pandemic, while the railroads have tallied extraordinary profits.

“It’s a slap in the face,” said Anthony Gunter, who worked on maintenance crews for Norfolk Southern Railway for almost 14 years before he quit last summer. “Here’s the company putting out every quarter: ‘Record-breaking profits!’ But then they are going to sit and hold you two to three years out on a contract without a pay raise, while they are telling you how good they are doing.”

The railroads counter that the tentative agreement delivers the most robust pay increases in half a century. Workers would receive a 24 percent wage increase over five years — from 2020, when the last contract expired, through 2024 — lifting average wages to $110,000.

The deal includes annual bonuses of $1,000 and a pledge that employee contributions to health care plans will not increase.

But the deal excludes a measure, eagerly sought by the unions, that would add 15 days of paid sick leave per year. The railroads say the cost of that provision would reach $688 million per year, jeopardizing their ability to invest in their networks.

A board convened by the White House to adjudicate the competing proposals sided with the railroads on that issue, recommending the addition of a single personal day.

The unions say the headline-grabbing wage increase is really a pay cut when adjusted for inflation. And they challenge the railroads’ claims that extra compensation would imperil investment.

Since 2004, the unions note, the profits of the largest American railroads have increased more than sevenfold, reaching nearly $23 billion last year. In the four years before the pandemic, three major carriers — Union Pacific, Norfolk Southern and CSX Transportation — collectively devoted $42 billion to repurchasing their stock, a step that boosts share prices.

During the years that were governed by the previous labor contract, 2015-19, worker pay increased less than 14 percent, while pay for chief executives more than doubled.

Yet, in conversations with rank-and-file workers for major railroads from Texas to New York, money weighed in as a secondary consideration. More than anything, workers expressed outrage over their lack of paid sick leave. Most spoke on the condition that they not be named, citing the risk of being disciplined or fired.

“You had guys that just didn’t want to share that they had Covid because they couldn’t afford to take off,” said a former member of a traveling maintenance gang for a major railroad based in Alabama. “I believe it added to the spread on the road.”

The railroads say contracts have historically lacked short-term paid sick leave because of the priorities pursued by the unions in collective bargaining.

“Both sides agreed to high compensation in exchange,” said Ian Jefferies, the president and chief executive of the railroad association.

He added that workers had paid sick leave that kicked in after four days of illness. They can also avail themselves of federal programs that reimburse them for time off because of sickness.

“We do not want employees showing up to the job site sick,” Mr. Jefferies said.

Rail workers say the particulars of sick leave policy is merely one source of injustice. They condemn what they describe as a culture governed by the fear of missing shifts.

Mr. Gunter, the former Norfolk Southern maintenance worker, said his son was born last year with a heart defect. When he stayed home during subsequent open-heart surgery, he said, his supervisor pressured him to return immediately.

“He said, ‘The gang can’t function properly without you. You’re putting me in a tough spot,’” Mr. Gunter recalled. “‘You have to be here.’”

Working on a traveling maintenance gang has always been difficult, especially for those with children. Groups of between 20 and 60 men — and they are almost always men — roam widely, staying away from home for weeks at a time.

“To have a successful family, you’ve got to have a wife who’s very understanding,” said one member of a gang in Texas. “If not, you ain’t gonna be married long.”

Lodging on the road runs the gamut from basic to grim. One worker described throwing his clothes away after every stint to avoid bringing bedbugs home.

In recent years, the railroads have embraced a new model that has made this lifestyle even more challenging — so-called Precision Scheduled Railroading. This is the functional equivalent of Just in Time, the mantra that has long ruled manufacturing, prompting companies to slash supplies of parts and raw materials in a bid to cut costs. Trains are supposed to be run on tighter, more rigorous schedules. That allows railroads to reduce expenses by making do with smaller crews.

To the workers, that has meant sharp reductions in head counts and the elimination of overtime. Over the last six years, major railroads have reduced their work forces by nearly one-third, according to the Surface Transportation Board, a federal regulatory body.

The railroads have maximized profitability by lengthening trains, often delaying service until they amass sufficient cargo, say workers. The frequent shifting of schedules combined with the reduction of workers has forced traveling gangs to journey greater distances while constantly adjusting to changing demands.

The previous week, the gang in Texas had planned to work for several days and then spend a few days with their families. At the last minute, the railroad changed the location, forcing many of the men to leave home a day earlier. Then it kept them a day longer, reducing their time at home.

One worker had recently had surgery and was due for a scan to monitor his condition. He had made an appointment during what was supposed to have been a week off. When the railroad changed the schedule, he had to delay it.

“Everybody’s pissed off,” he said. “Stockholders and top executives are making three times the money they used to, and we’re in the same rut.”