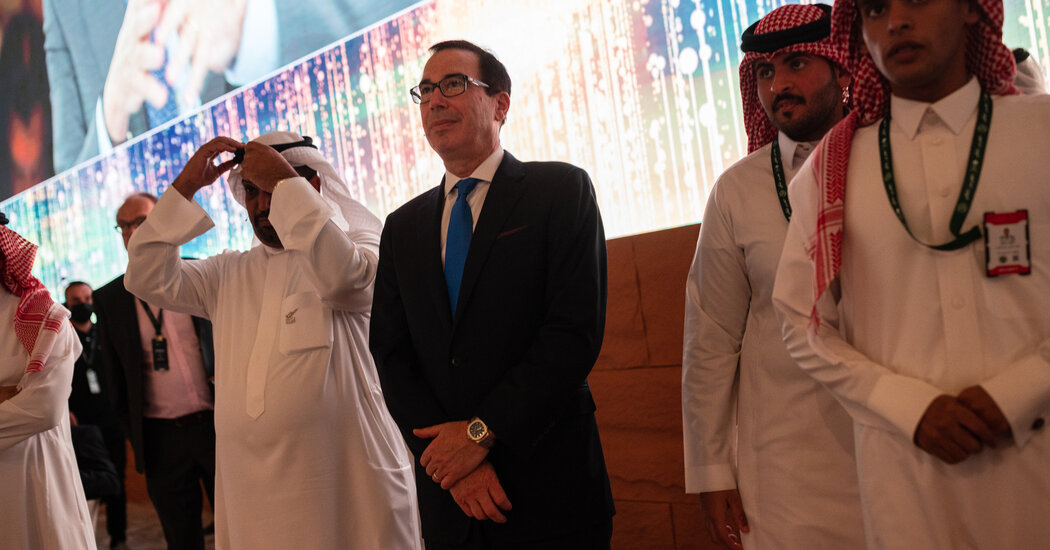 Steven Mnuchin, who was Treasury secretary under President Donald J. Trump, moved faster than previously known to obtain billions of dollars in investments from Persian Gulf royal families after leaving government, two Democratic lawmakers said in a letter on Thursday.

The letter noted that Mr. Mnuchin filed papers to create a precursor to his new investment firm, Liberty Strategic Capital, just one day after leaving government, according to Delaware state records.

Mr. Mnuchin then visited the capitals of Saudi Arabia, the United Arab Emirates and Qatar a total of 11 times over the next five months, according to a letter to the Treasury Department from Representative Carolyn B. Maloney of New York, the chairwoman of the House Committee on Oversight and Reform, and Senator Ron Wyden of Oregon, the chairman of the Senate Finance Committee.

The speed of Mr. Mnuchin’s pivot to private business in the gulf, they said, “raises serious concerns about Mr. Mnuchin’s actions in office and whether his personal financial interest influenced U.S. policy.”

The letter cited records obtained from the Secret Service, which protected Mr. Mnuchin during his travels in the period after he left office.

The New York Times reported this year that Mr. Mnuchin raised $2 billion in investments from funds run by the governments of those three gulf monarchies in the months after leaving government. The Times also reported that as Treasury secretary, Mr. Mnuchin had visited those countries far more extensively than his predecessors, meeting frequently with the heads of their sovereign wealth funds and returning to meet with them again in his final days before leaving government.

Over his four years as Treasury secretary, Mr. Mnuchin made a total of 18 visits to four gulf monarchies, including Kuwait, and met with their sovereign wealth fund managers a total of 27 times, the Democrats’ letter notes, including several meetings in the final weeks of the Trump administration.

Mr. Mnuchin’s fund raised $500 million each from Kuwait, the United Arab Emirates and Qatar, as well as $1 billion from Saudi Arabia, according to documents obtained by The Times from the kingdom’s sovereign wealth fund.

In a statement, a spokesman for Mr. Mnuchin noted that his firm, Liberty Strategic Capital, “is pleased to have a very diverse investor base,” including insurance companies and institutional investors as well as funds run by foreign governments.

Ms. Maloney and Mr. Wyden stated in the letter that they were investigating Mr. Mnuchin’s actions to inform conflict-of-interest legislation.

But Ms. Maloney is leaving Congress at the end of the year after losing her Democratic primary, and if Republicans take control of the House in the midterm elections, Democrats will no longer run the oversight committee.

The House Ethics Committee also recently said it was investigating Ms. Maloney for undisclosed reasons, after a referral in June from the Office of Congressional Ethics.

The oversight committee previously announced an investigation of Jared Kushner, Mr. Trump’s son-in-law and former adviser. That investigation followed a report by The Times that within six months after Mr. Kushner left the White House, a firm newly founded by him had reached a deal for a $2 billion investment from Saudi Arabia’s sovereign wealth fund.

In a letter seeking records from Mr. Kushner, the committee said it was investigating whether he had traded on his position in the White House to secure the Saudi investment. That investigation has not yet produced any new disclosures.