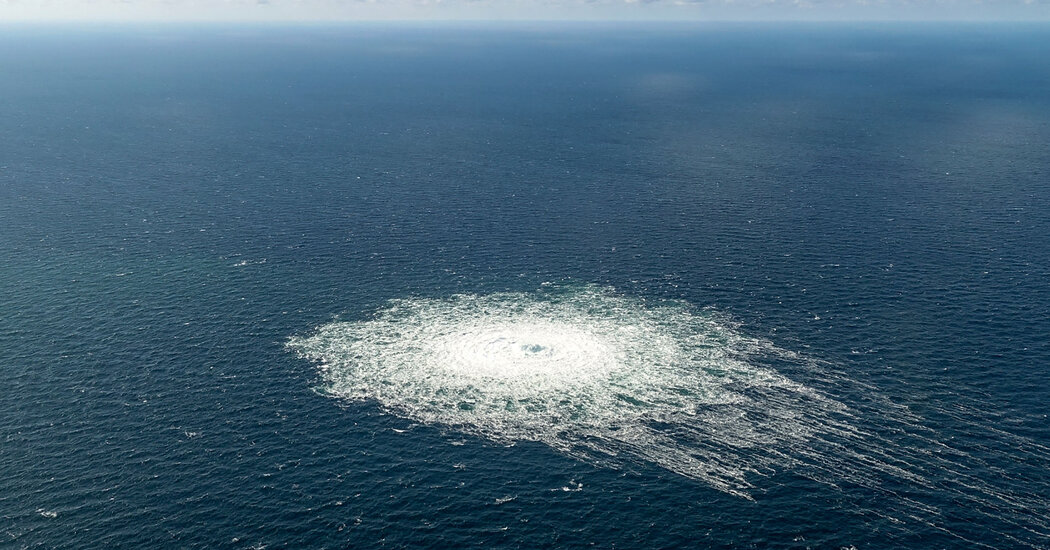 After midnight on a Monday in late September, seismographs in Sweden suddenly picked up a violent disturbance that jolted the floor of the Baltic Sea south of the rocky island of Bornholm, a onetime Viking outpost that is a part of Denmark.

Hours later — at 7 p.m. local time — it happened again: a series of underwater explosions farther off the island’s northeastern coast.

The next morning, photographs showed enormous blooms of methane bubbling on the ocean surface above both explosion sites, confirming reports of a severe loss of pressure in Nord Stream 1 and 2, the natural gas lines linking Russia and Germany.

Now, a month after subsea explosions ripped holes in the Nord Stream pipelines, in busy international waters, the leakage has stopped, the first underwater images of the twisted metal and severed openings have been published and three countries have investigations underway.

But beyond acknowledging that explosives were used in acts of deliberate sabotage, investigators have disclosed few details of their findings. Amid rampant speculation about who carried out the explosions — was it the Russians trying to rattle the West, the Americans trying to sever a Russian economic artery or possibly the Ukrainians trying to take revenge on Russia? — what is known remains as cloudy as the images from the floor of the Baltic Sea.

Denmark, Germany and Sweden have launched separate investigations into the leaks — Denmark and Sweden because the explosions occurred in waters that were within their so-called exclusive economic zones, and Germany because that is where the pipelines terminate.

In a letter to the U.N. Security Council from Sept. 29, three days after the incidents, Denmark and Sweden said they believed that “several hundred kilograms” of explosives had been used to damage the pipes, each of which measures more than three-and-a-half feet in diameter and is made from steel reinforced by a weighted concrete coating.

All three countries are refusing to release any more information. The acute geopolitical tensions surrounding the blasts — coming amid the fierce fighting in Ukraine and an economic war between Moscow and the West — has heightened the caution.

“There is a lot of secrecy still going on,” said Jens Wenzel Kristoffersen, a commander in the Danish Navy and a military analyst at the Center for Military Studies at the University of Copenhagen. “The reason is simply because they have to be absolutely sure. When they have results, they have to be based on quite hard-core facts and not just speculation.”

Commander Kristoffersen said he believed it was unlikely that any of the investigators would make an announcement “until they have this smoking-gun evidence.”

Tentative or uncoordinated findings, he added, “could lead to reactions which would not be helpful at this point of time.”

The German government stressed that the complexity of the forensic examination of the damage sites “will almost certainly not allow any short-term, reliable statements to be made about the authorship,” or who carried out the attacks.

The pipelines are owned by Gazprom, Russia’s state-owned natural gas monopoly. (Minority stakes in Nord Stream 1 are held by four other energy companies: Wintershall Dea and E.On, both based in Germany, Gasunie in the Netherlands and Engie in France.)

Russian officials have complained that they have been blocked from investigating the explosion sites. The Kremlin spokesman, Dmitri S. Peskov, accused the Europeans of conducting the investigation “secretively,” without Moscow’s involvement. “According to statements we are hearing from Germany, from France and from Denmark, this investigation was set up inherently to put the blame on Russia,” Reuters quoted Mr. Peskov as saying.

The twin 760-mile-long pipelines, stretching from the northwest coast of Russia to Lubmin, in northeastern Germany, have always been the focus of international tension. The original Nord Stream, completed in 2011 at a cost of more than $12 billion, was criticized as an expensive way for Gazprom to ship gas to Germany while avoiding paying transit fees in Ukraine.

Years later, the idea of Nord Stream 2, a sibling pipeline that would double the original’s capacity, was condemned by many Central and Eastern European countries, as well as by the United States, which warned that it would permit Moscow to tighten Germany’s reliance on Russian gas. Although the $11 billion pipeline was completed last year, German authorities shelved it just before Russia invaded Ukraine in February.

Although the newer pipeline has never been used, and the original one has not delivered gas since July because of what Gazprom calls technical issues, both were filled with highly pressurized methane to help the pipes withstand water pressure on the floor of the sea. Both Nord Streams are composed of two strands of pipe running along the seafloor. The explosions caused leaks along both strands of Nord Stream 1, but in only one strand of Nord Stream 2. Its other strand remains intact.

Murky images published last week by the Swedish tabloid Expressen pointed to the force of the explosion that hit Nord Stream 1, seeming to show that several segments of pipe were severed from the main pipeline.

Trond Larsen, a submersible drone operator whose images were commissioned by the Swedish newspaper, pointed out that, when the pipes burst, the highly pressurized gas — up to nearly 3,200 pounds per square inch — disturbed the seabed, appearing to bury parts of the damaged pipe.

“I believe we saw the part of the pipe going west still buried in the seafloor, the end of the pipe going east lifted up from the seafloor,” Mr. Larsen said in a telephone interview. He said there was very little debris in the area, perhaps because the rush of gas had pushed it all away, or it had already been removed by the Swedish investigators.

Last week, German investigators also sent a vessel equipped with underwater drones and a diving robot to comb the seafloor in the same area for more evidence of the explosion.

Danish authorities have not yet lifted their restrictions in their economic waters above the explosion site, which were sealed off to shipping traffic as a safety precaution.

The explosions took place in a busy maritime corridor that is frequented by fishing boats, merchant traffic and military vessels from the nations that border the Baltic Sea as well as NATO partners, including the United States.

Since the blasts, patrols have increased in the Baltic and the North Sea, which is home to a vast network of cables and pipelines connecting Norway — Europe’s most important energy exporter since Russia invaded Ukraine — to Britain and the European mainland. Security is also high along a recently opened pipeline, Baltic Pipe, which carries Norwegian gas to Poland, crossing the Nord Stream arteries on the seabed not far from the explosion sites.

This month, Mr. Putin told an energy conference in Russia that delivering natural gas to Europe through the remaining strand of Nord Stream 2 would be a matter of “just turning on the tap.” His statement echoed those he made last October, as he urged Germans to approve the pipeline.

Days later, Alexei Miller, Gazprom’s chairman, in comments made to Russia’s Channel One television station, floated the idea that it would possibly be faster to rebuild the pipeline than to repair it. At the same time, he acknowledged that any such move would require interest from Germany, as well as resolving regulatory, legal and sanctions issues.

After years of ignoring the protests from their neighbors in Central and Eastern Europe — some of whom share borders with Russia and have a long history of dealing with Moscow — Germany’s leaders have recognized the mistake of letting their country’s powerful economy become overly dependent on Russian gas.

Investments are now focused instead on securing and connecting floating terminals for shipments of liquefied natural gas from the United States and elsewhere. One of the new terminals is to be built off the coast of Lubmin, allowing the onshore pipelines that were previously used to receive Russian gas through Nord Stream to carry L.N.G.