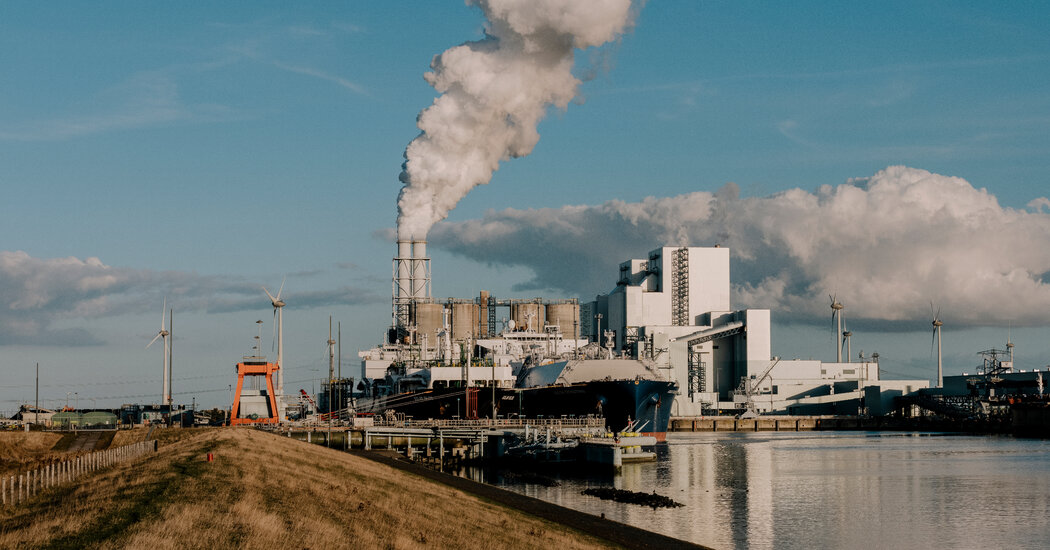 Two enormous vessels tethered to a pier in the Eemshaven harbor in the Netherlands form the centerpiece of this country’s riposte to Russia’s throttling energy supplies to Europe.

On a blustery fall day, the Gaslog Georgetown, at nearly 1,000 feet long, was pumping liquefied natural gas brought from the U.S. Gulf Coast into a ship designed to receive the chilled fuel and send it into pipelines onshore.

These cargoes of L.N.G., which started arriving in mid-September, are bringing massive transfusions of natural gas not only to the Netherlands but also farther on to other energy-hungry European countries, including Germany and the Czech Republic.

When Russia invaded Ukraine in February, the energy authorities in the Netherlands understood that Europe faced a dire threat — but also that their country, with its central location and extensive pipeline links, could help prevent the continent from shuddering in the cold this winter.

“We realized that the Netherlands is again very important for Europe,” said Ulco Vermeulen, a board member and executive at Gasunie, the state-controlled energy infrastructure company. “We can load supplies and bring them to destinations in Europe.”

But in a country where environmental concerns are a high priority, the growing reliance on L.N.G. has created unease. Home to one of the world’s largest natural gas fields, the Netherlands is now dotted with clean energy initiatives, testament to the European Union’s goal to be a net-zero emitter of greenhouse gases by 2050. A court in The Hague last year ordered Shell, one of the country’s largest companies before it moved to London, to speed up its reduction of carbon dioxide emissions by curbing production and sales of oil and gas.

Dutch environmental groups are skeptical about letting energy companies like Shell, which has contracted to purchase some of the L.N.G. coming into Eemshaven, use new sources of natural gas, even for a few years in an emergency. They say the investment in the infrastructure around the terminals, amounting to billions of euros, may lead to a steady stream of L.N.G. imports well after the energy crisis has passed.

“There is a certain lock-in effect that may be in play,” said Kirsten Sleven, a campaigner for Milieudefensie, the Dutch branch of Friends of the Earth, which brought the case against Shell.

Countries around the globe are struggling with similar issues. There is a danger that governments will “learn the wrong lesson” from the crisis, “putting near-term energy security first and leaving thinking about climate change for tomorrow,” said Jason Bordoff, director of Columbia University’s Center on Global Energy Policy.

Dutch energy executives believed they were facing an emergency as the Russian president, Vladimir V. Putin, started threatening to cut off gas supplies to Europe over its opposition to the invasion of Ukraine.

Compressing into months what might normally have been years of negotiations, regulatory approvals and construction, Mr. Vermeulen, port officials and other executives cobbled together the pipelines, piers and other infrastructure necessary to import liquefied natural gas to guard against a cutoff from Russia.

The facility has two floating L.N.G. terminals — leased vessels bristling with equipment for turning the chilled liquid delivered by oceangoing tankers back into a vapor and sending it into the European grid.

Russia has now severely cut back pipeline gas flows to Europe, but Mr. Vermeulen says the Netherlands will probably have enough resources to get through the winter, when natural gas consumption usually soars. He worries, though, that pipeline bottlenecks may make it difficult to supply parts of Europe.

The Netherlands has also put in place other emergency measures, including allowing coal-fired power plants to ramp up.

European energy officials like Mr. Vermeulen insist that regressing on climate goals is not their aim. For instance, Mr. Vermeulen said that in negotiations for the floating facilities, he had demanded that the leases be limited to five years, even as some parties wanted 10. He figures that by the end of those leases, plenty of other gas-importing capacity will be ready in Europe and hydrogen will start becoming available in commercial quantities.

Others argue that the energy crisis caused by the war in Ukraine could wind up accelerating the shift to cleaner fuels, as natural gas prices have soared. Though benchmark European futures prices have fallen in recent days, they are still about eight times the levels of two years ago, before the crunch began.

“I think the cost of natural gas will be much higher than in the past,” said Peter Molengraaf, an adviser to the Dutch government on energy innovation. “I think the relatively high price will make sure it is absolutely economic to move to renewables.”

A big concern, though, is whether residents who have been slammed by recent sudden rises in their bills for energy, food and other essentials will be able to afford electric cars or energy-saving heat pumps for their homes. For people earning low incomes, “there is nothing in terms of a positive transition there,” said Jacques Wallage, who was a Dutch cabinet minister and mayor of Groningen.

In the Netherlands, the current energy crisis is colored by a long and complex history. In 1959, one of the world’s largest natural gas fields was discovered under a roughly 350-square-mile expanse of farmland and picturesque villages in the province of Groningen, which includes Eemshaven. The find spurred the construction of extensive pipeline networks, and provided the Netherlands and neighboring countries with cheap energy, cleaner than coal, for decades.

Over the last decade, those benefits have been overshadowed by earthquakes caused by the gas extraction that damaged homes and made life miserable for residents. “It changed your whole life, the earthquake thing,” said Jaap Pastoor, who with his wife, Nienke, runs a dairy farm, where barns and houses suffered damage from the tremors.

After shrugging off complaints for years, the Dutch government, which reaped huge revenues from the gas, in 2019 ordered Shell and Exxon Mobil, which run the Groningen field through a joint venture known as NAM, to wind down gas production to a bare minimum. Reserves worth hundreds of billions of euros are to be left in the ground.

Now, despite having a reserve of gas that could make a major contribution to bolstering European energy supplies, the government is wary of reopening the throttle at Groningen for fear of a backlash, especially from residents.

“We have a strong opinion that they should never reopen the gas field,” said Jeanette Ubels, who is rebuilding her earthquake-damaged home in the village of Westeremden and is installing electric heating so as not to depend on gas.

“The decision is just appalling,” said Wybren van Haga, a right-leaning member of the Dutch Parliament. “It is technically flawed, it is politically motivated, and it costs an awful lot of money.”

But few observers think the government will allow Groningen to ramp up again except in an extreme situation. The government sees the gas field “as a real, real lender of last resort,” Mr. Vermeulen said.

And in the area around the giant gas field, the focus is on shifting to cleaner forms of energy.

“Because of the geopolitical situation we have now with Russia, I feel that everybody sees the urgency” is greater now, said Melissa van Hoorn, the regional minister for climate and energy transition.

Solar power and wind power are growing fast in the Netherlands, and now interest is shifting to hydrogen, a clean-burning fuel that companies are betting will be used in large volumes to store energy and power heavy vehicles and heavy industry. Groningen’s network of gas pipelines could someday be used to deliver fuels like hydrogen.

Shell is building in Rotterdam what is expected to be Europe’s largest electrolyzer, a device that uses electric power to make hydrogen from water. It would produce “green” hydrogen, because the power would come from a giant wind farm off the coast.

The company, which retains a large presence in the Netherlands despite moving its headquarters last year, is obtaining some real-world experience by supplying hydrogen to a fleet of 32 buses in the Groningen region.

“This is new, so we need to learn how to do this,” said Ruben van Grinsven, a Shell general manager for hydrogen.

Cas König, chief executive of Groningen Seaports, which runs the harbors at Eemshaven and nearby Delfzijl, was among the officials who pushed hard to develop the liquefied natural gas terminal so quickly. Still, he said the confrontation with Russia over energy could accelerate the pivot toward clean energy.

He is expanding plans for importing hydrogen, which will be needed in greater quantities than a small country like the Netherlands can produce domestically. The gas could be used by the port’s cluster of electric power and chemical plants, and fed to other parts of the Netherlands and neighbors like Belgium and Germany.

“As soon as the infrastructure is there,” he said, “the economy will follow.”