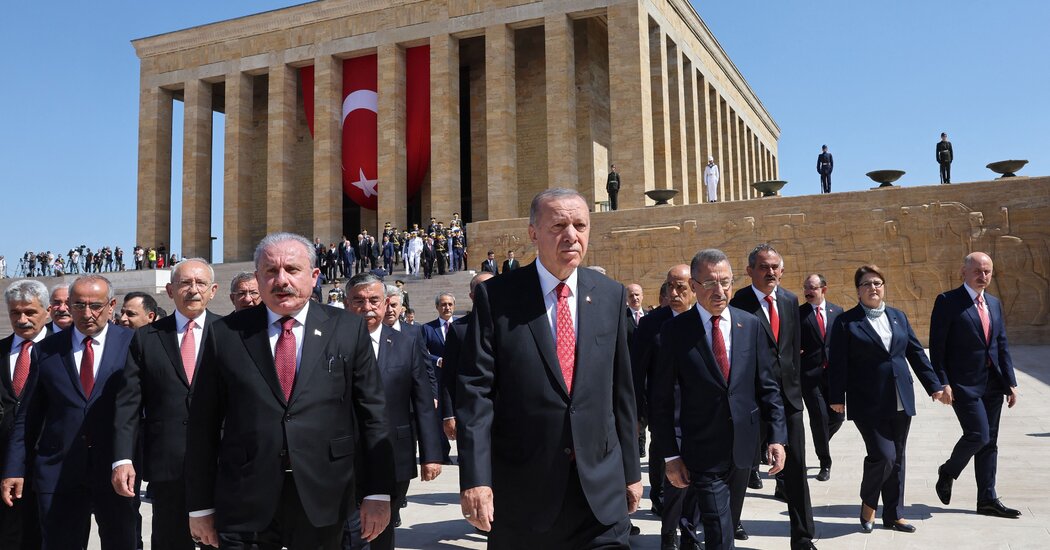 ISTANBUL — Last week at a closed dinner in Prague, Prime Minister Kyriakos Mitsotakis of Greece was addressing 44 European leaders when President Recep Tayyip Erdogan of Turkey interrupted him and started a shouting match.

Before stalking from the room, Mr. Erdogan accused Mr. Mitsotakis of insincerity about settling disputes in the eastern Aegean and blasted the European Union for siding with its members, Greece and Cyprus, according to a European diplomat and two senior European officials who were there.

While the others, flabbergasted and annoyed, finished their dinners, Mr. Erdogan fulminated at a news conference against Greece and threatened invasion. “We may suddenly arrive one night,” he said. When a reporter asked if that meant he would attack Greece, the Turkish president said, “Actually you have understood.”

The outburst was only the latest from Mr. Erdogan. As he faces mounting political and economic difficulties before elections in the spring, he has been ramping up the threats against his NATO ally since the summer, using language normally left to military hawks and ultranationalists.

While few diplomats or analysts are predicting war, there is a growing sense among European diplomats that a politically threatened Mr. Erdogan is an increasingly dangerous one for his neighbors — and that accidents can happen.

Mr. Erdogan needs crisis to buoy his shaky standing at home after nearly 20 years in power, a diplomat specializing in Turkey said, requesting anonymity. And if he is not provided one, the diplomat said, he may create one.

The rising tensions between Greece and Turkey, both NATO members, now threaten to add a difficult new dimension to Europe’s efforts to maintain its unity in the face of Russia’s war in Ukraine and its accumulating economic fallout.

Already, Mr. Erdogan has made himself a troublesome and unpredictable ally for his NATO partners. His economic challenges and desire to carve out a stable security sphere for Turkey in a tough neighborhood have pushed him ever closer to President Vladimir V. Putin of Russia.

Mr. Erdogan has earned some shelter from open criticism by allies because of his efforts to mediate between Russia and Ukraine, especially in the deal to allow Ukrainian grain exports.

But he has refused to impose sanctions on Russia and continues to get Russian gas through the TurkStream pipeline, while asking Moscow to delay payment for energy.

On Thursday, Mr. Erdogan met Mr. Putin in Kazakhstan, where they discussed using Turkey as an energy hub to export more Russian gas after the pipelines to Germany under the Baltic Sea have been damaged.

But it is the escalating rhetoric against Greece that is now drawing special attention.

Sinan Ulgen, the director of EDAM, an Istanbul-based research institution, said that of course there was an electoral aspect to Mr. Erdogan’s actions. But there were also deep-seated problems that foster chronic instability and dangerous tensions.

“Turkey and Greece have a set of unresolved bilateral disputes,” he said, “and this creates a favorable environment whenever a politician in Ankara or Athens wants to raise tensions.”

Mr. Mitsotakis is also in campaign mode, with elections expected next summer, damaged by a continuing scandal over spyware planted in the phones of opposition politicians and journalists. As in Turkey, nothing appeals to Greek patriotism more than a good spat with an old foe.

He has sought to appear firm without escalating. Confronted at the dinner in Prague, Mr. Mitsotakis retorted that leaders should solve problems and not create new ones, that he was prepared to discuss all issues but could not stay silent while Turkey threatened the sovereignty of Greek islands.

“No, Mr. Erdogan — no to bullying,” he said in a recent policy speech. He told reporters that he was open to talks with Mr. Erdogan despite the vitriol, saying he thought military conflict unlikely. “I don’t believe this will ever happen,” he said. “And if, God forbid, it happened, Turkey would receive an absolutely devastating response.”

He was referring to Greek military abilities that have been significantly bolstered recently as part of expanded defense agreements with France and the United States.

Mr. Mitsotakis has also taken advantage of American annoyance with Mr. Erdogan’s relations with Russia and his delay in approving NATO enlargement to Finland and Sweden to boost ties with Washington. In May, he was the first Greek prime minister to address Congress and urged them to reconsider arms sales to Turkey.

He has said Greece will buy F-35s, while Turkey, denied F-35s because of its purchase of a Russian air-defense system, is still pressing to get more F-16s and modernization kits, using NATO enlargement as leverage.

But Mr. Erdogan is facing considerable problems at home, making tensions with Greece an easy and traditional way to divert attention and rally support.

Mr. Erdogan is presiding over a disastrous economy, with inflation running officially at 83 percent a year — but most likely higher — and the currency depreciating. Turkish gross domestic product per capita, a measure of wealth, has dropped to about $7,500 from more than $12,600 in 2013, based on Turkey’s real population, which now includes some four million Syrian refugees, according to Bilge Yilmaz, a professor at the Wharton School of the University of Pennsylvania.

Mr. Erdogan has kept cutting interest rates against conventional economic advice. “We need to reverse monetary policy,” said Mr. Yilmaz, who is touted as a likely finance minister should Mr. Erdogan lose the election. “A strong adjustment of the economy will not be easy.”

There is also growing popular resentment of the continuing cost of the refugees, which were taken in by Mr. Erdogan as a generous gesture to fellow Muslims in difficulty.

Still, Mr. Erdogan is thought to have a solid 30 percent of the vote as his base, and government-controlled media dominate, with numerous opposition journalists and politicians jailed or silenced.

In a report on Wednesday, the European Union criticized “democratic backsliding” and said that “in the area of democracy, the rule of law and fundamental rights, Turkey needs to reverse the negative trend as a matter of priority with addressing the weakening of effective checks and balances in the political system.”

Still, at this point, analysts think Mr. Erdogan could lose his majority in Parliament and might just lose the presidential election itself.

That is an analysis firmly rejected by Mr. Erdogan’s Justice and Development Party, the AKP, said Volkan Bozkir, a former diplomat and member of Parliament, who says flatly that Mr. Erdogan and his party will be re-elected.

Constantinos Filis, the director of the Institute of Global Affairs at the American College of Greece, believes that Mr. Erdogan is trying to keep all options open, “casting Greece as a convenient external threat and creating a dangerous framework within which he could justify a potential move against Greece in advance.”

As for Washington, he said, they are telling Mr. Erdogan: “Thank you for what you did in Ukraine, of course you haven’t imposed sanctions on Russia, but OK, you’re in a difficult position, strategically, diplomatically, economically — but don’t dare to do something in the Aegean or the Eastern Mediterranean that will bring trouble to NATO.”

More likely, Mr. Filis said, Mr. Erdogan would again send migrants toward Europe, or launch another energy exploration in disputed areas off Cyprus or Crete, which produced near clashes in 2020, or intercept a Greek ship transporting military equipment to one of the Aegean Islands.

Mr. Ulgen also does not expect armed conflict but would not be surprised. “It could happen; it’s not something we can rule out anymore,” he said. “But if it happens, it will be small-scale.”