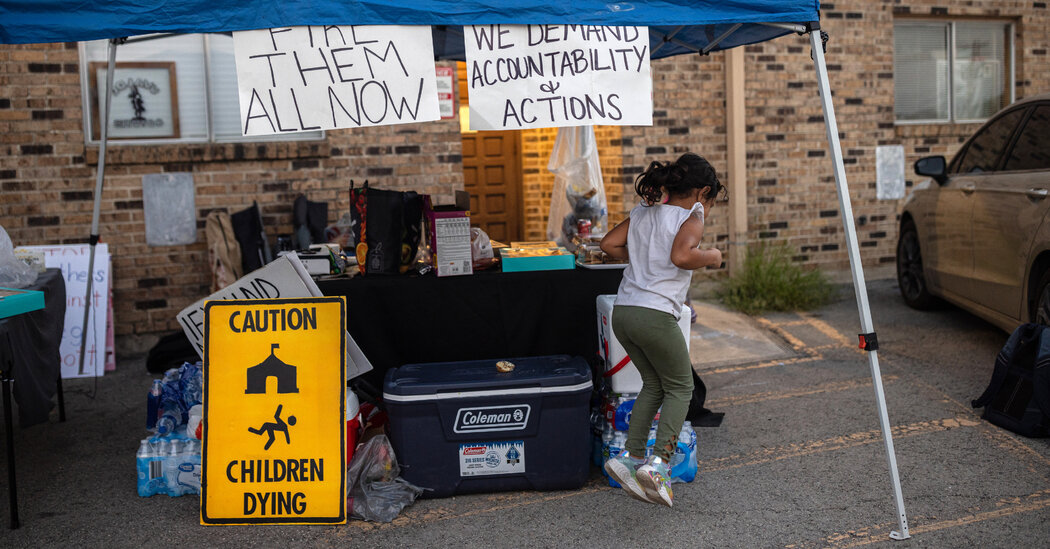 HOUSTON — The school district in Uvalde, Texas, said on Friday that it had suspended the operations of its Police Department amid ongoing questions about its officers’ response to the May 24 mass shooting at Robb Elementary School and a sustained protest by victims’ parents.

The district had previously fired the chief of the department, Pete Arredondo, who state officials have said was the incident commander during the shooting and bore responsibility for delaying a confrontation with the gunman for over an hour after the shooting began. The gunman killed 19 children and two teachers.

On Friday, the school district said in a statement that it had placed the officer who took over for Mr. Arredondo, Lt. Miguel Hernandez, and another district employee, Ken Mueller, on administrative leave. Mr. Mueller, the director of student services, had decided to retire, the statement said.

“Recent developments have uncovered additional concerns with department operations,” the district said in explaining its decision.

The statement did not detail what those developments were, but the move comes amid a long-running protest at the district offices by several relatives of the victims who at times blocked employees from entering.

Brett Cross, who camped out outside the offices for nine nights, went home on Friday, saying that he and the other families saw the district’s decision as a direct result of their efforts.

“It shouldn’t have had to last this long,” said Mr. Cross, who raised his nephew, Uziyah Garcia, 10, like a son until the day he was killed at the school. “It’s our first win, but it won’t be the last.”

The suspension of the Police Department — which consisted of five officers, including Lieutenant Hernandez, and a security guard, according to its website — also followed revelations by CNN that the school district over the summer had hired a new officer, previously employed by the Texas Department of Public Safety, who had been among those first at the scene at Robb Elementary but did not move to confront the gunman. The district fired the officer, Crimson Elizondo, shortly after the report on Thursday.

In its statement, the district said it has asked for additional officers from the Texas Department of Public Safety to provide security for its schools.