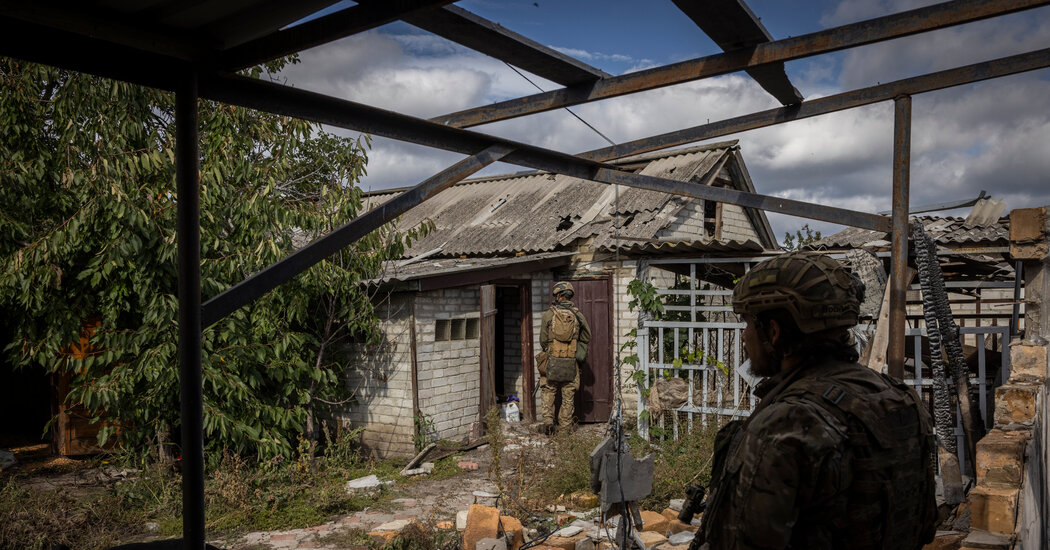 STAVKY, Ukraine — Racing down a road with his men in pursuit of retreating Russian soldiers, a battalion commander came across an abandoned Russian armored vehicle, its engine still running. Inside there was a sniper rifle, rocket propelled grenades, helmets and belongings. The men were gone.

“They dropped everything: personal care, helmets,” said the commander, who uses the code name Swat. “I think it was a special unit, but they were panicking. It was raining very hard, the road was bad and they drop everything and move.”

After months of static fighting and holding the line under withering Russian artillery barrages, Ukrainian soldiers are exulting over their smashing of Russian lines in the northeast three weeks ago, and their recapturing of swaths of territory seized by Russian troops earlier this year. They have almost retaken the whole of Kharkiv Province, as well as territory in each of the four regions that President Vladimir V. Putin claims to have annexed for Russia.

There has been little time for reflection for the Ukrainians as they press their counterattack, focused on keeping the pressure on the retreating Russian army to prevent it from regrouping. Yet after months in the trenches never seeing the faces of the enemy, Ukrainian soldiers and commanders have now engaged the Russians up close and gotten a chance to size up their opponent.

“We have the strength to do this,” Swat said. “Because right now they are in panic, they really are in panic.”

A 58-year-old career soldier, Swat came out of retirement to join the Carpathian Sich, a volunteer battalion, taking over command after his predecessor was killed in battle near Izium in June.

The battalion has been in the forefront of the fighting, providing flanking support in battles for the strategically important cities of Izium and Lyman in recent weeks. Four days ago the battalion seized another town further east, helping secure a series of dams and the last settlements of northern Donetsk Province for Ukraine.

The battles have been fast moving, and in the flight from Izium, produced a great deal of panic on the Russian side. After the capture of Izium, Swat said, his unit pursued Russian troops for 15 miles down the road in one day. A few more days and Ukrainian troops were at the gates of Lyman, 30 miles south of Izium; Swat’s group moved east to block any attempt by the Russian army to send reinforcements.

The day Lyman fell, his battalion was attacking another town further east. He asked for security reasons not to disclose the location. His units captured the town in a day, without losses, although nine soldiers were wounded. By the third day they had searched and secured the town and handed it over to another group so they could pull back and recharge.

Then after three weeks of sweeping success and minimal losses, the battalion lost five men in a Russian missile strike and Swat lost a close friend when their car hit a mine. Swat was driving but survived with a concussion.

Tearing up when he talked of his friend in an interview, he asked that a reporter not sugarcoat events of the war with only success stories.

In the battle for Izium, Swat was preparing his assault when he saw Russian troops suddenly falling back, he said. Ukrainian brigades attacking from the north had taken a main highway, cutting Russian troops’ supply lines, his deputy commander said.

They moved up the timing of their assault and the unit raced in from the south and seized a high point in the city.

Russian armored vehicles were defending, firing machines guns, Swat said. “But people were so excited, no one stopped,” he said. “I was running with a pistol. It’s like a small feeling of victory. It’s unbelievable, you feel it inside, you are happy.”

“We get this hill,” he said, “It was happiness, everyone jumping, shooting, hugging each other.”

The men were firing off their weapons, not listening when he ordered them to cease fire, he said. It was just a minor firefight, given that the Russians were already withdrawing, but the capture of Izium gave them a huge boost of confidence. It was vindication, he said, for three months of grueling fighting defending positions under Russian artillery and airstrikes that cost them many lives, he said.

As they raced down the road south from Izium after retreating Russian troops, they captured some enemy soldiers who were sleeping off lunch in a camp in the forest. “They were surprised, seven of them,” he said. “No one expected that after lunch we would advance on a forest line.”

Some of the Russians, demotivated and scared, and some hungry, were ready to give themselves up, he said. But some kept fighting, believing Russian indoctrination that the Ukrainians would torture and kill them if they allowed themselves to be captured.

On one occasion a Russian soldier pulled the pin of a grenade and killed himself, saying he would never let himself be taken prisoner, Swat said. “We jumped to him but we were too late,” he said. “So they are also brave soldiers, and they are afraid.”

His battalion has taken more than 30 Russians prisoner in seven months of fighting, 23 of them in the counterattack, he said. “We just get information from them, give them water, food, warm clothes and send them to a higher level,” he said.

It has been a steep learning curve for his men, not only in survival but in humanity. A 27-year-old American platoon commander from his battalion, who uses the code name Boris, said one of his most intense moments of the war came when he held a cup of water for a Russian prisoner to drink.

But the fighting units had little time to chase deserters.

In some places local residents told them they were sheltering Russian soldiers who had either fled their posts or been left behind, but Swat said he did not have time to stop. And in the past few days, he said, Ukrainian air reconnaissance tracked Russian units pulling out on foot through the forests using good military tactics — spreading out, moving slowly — but again his units were too tied up to pursue them.

The platoon commander named Boris said their units had carried out several assaults on Izium from the southwest in the weeks before the counterattack, luring the Russians into reinforcing in that direction. When the full force of the counterattack came from the north, they were not expecting it, he said.

That does not mean there was not resistance.

The Russians were often set up in well dug-in machine gun nests, several Ukrainian commanders and soldiers said. And once Russian troops pull back, there can be heavy bombardment from Russian planes, artillery, and long-range missiles. A powerful missile strike demolished a former Russian command post in the town they seized recently, killing five of his men, he said.

“It was like a cold water shower,” Swat said. Referring to the five who died, he said: “For two days I was like, crazy. They were young guys.”

For all the recent defeats, he said, he does not think the Russian army is by any means broken. “They will fight, they continue to fight,” he said. “It’s the Slavic mentality: to fight for your friends. They also have friends who died.”

He and his men all voiced concern about the mobilization in Russia, and the new strength it would bring to the Russian side.

The Ukrainian Army is growing stronger, but it is not yet where it needs to be, Swat said. “For all these small victories, it was a very, very tough time,” he said of the last seven months of the war. “Slowly we recover, but we are not there yet. And Russia has a lot of power, and it is unlimited in its weapons.”

In the village of Stavky, some 10 miles from the front line, the sounds of the Russian bombardment of recently recaptured settlements to the east were loud enough for soldiers and civilians to stop talking and listen.

But commanders and soldiers seemed to agree that Ukrainian troops should keep pushing before the Russian side could regroup.

“We have only one month to do this right now, because right now they are in panic,” Swat said. And winter was closing in. “Now we need to get winter clothes, and we are going to have mud.”