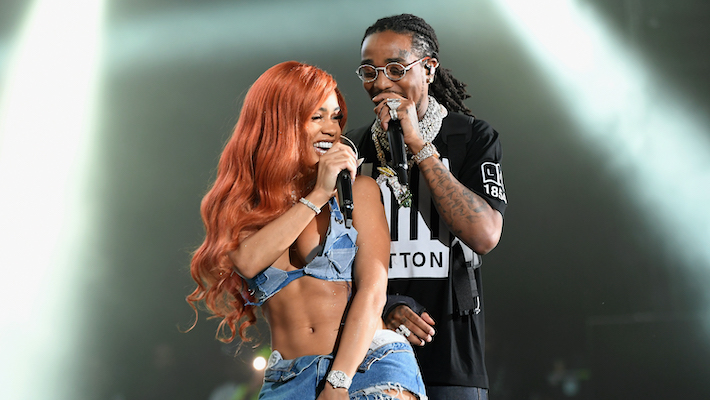 Quavo and Takeoff’s new album, Only Built For Infinity Links, is out now and while much of the rollout of the album revolved around fan concerns that the two Migos had permanently split from the third member of the trio, Offset, one line from its actual music has become a new source of speculation. On the song “Messy,” Quavo rhymes:

I said, “Caresha, please” (Soo) ’cause she too messy
Bitch fucked my dog behind my back, but I ain’t stressin’
You wanted the gang, you should’ve just said it, we would’ve blessed it

And while he doesn’t name names, fans are pretty sure that the lines are addressed to his former flame, Saweetie, with whom he had a very public and contentious breakup last year. The fact that the lyrics are so vague and the reference to Caresha Please, Yung Miami’s Revolt talk show, on which Saweetie recently appeared, have made it easy for fans to posit that the lyrics are about her. While some were convinced that this meant a recent rumor about Saweetie and Offset was true, since it would explain both breakups, others pointed to another rumored flame of the Bay Area rapper, Lil Baby, as the source of Quavo’s bile.

quavo is talking about lil baby. not offset. but he knows the offset & saweetie rumors are circulating so he’s just being double messy.

Errbody forgetting how Quavo and Lil Baby n dem was cool and Saweetie dropped them pictures of her shopping w/ a man but the internet detectives found out it was Lil Baby. Then Quavo posted on ig “I don’t matter we can switch”. But y’all so quick to run with Offset narrative ..

Although Lil Baby denied the rumor, eagle-eyed gossip hounds sleuthed out an outfit he was photographed in very closely matching that of a mystery man Saweetie posted on her own social media during a shopping date. Quavo’s supposed reaction at the time lends credence to the theory that “Messy” is about Saweetie and Lil Baby, but in all likelihood, Quavo is really doing what plenty of authors and writers have done in the past: Mashed up the circumstances of a few incidents to make them more cinematic, feeding off social media narratives to drive interest (just look at DaBaby’s recent publicity stunt with Megan Thee Stallion). Still, that won’t stop fans from nosing in because nothing sparks social media’s interest like soapy, steamy celebrity rumors. Check out some of the reactions below.

I don’t really look into it much so is Quavo mad Saweetie messed around with Lil Baby or was it true she messed with Offset??? I don’t be knowing nothing. Just seen someone post his lyrics with him rapping about her

Saweetie did not fuck offset 😂 he definitely talkin about Lil baby 😂😂 the only why migos ain’t all three of them is because offset and Pee but Quavo definitely talkin bout the beef between them and lil baby https://t.co/kMOL2kflY1

this whole saweetie/quavo/offset/lil baby situation is giving “it’s cool when he do, it’s a problem when she do it” now ya chest caved in?? and you in your feelings making a diss song??? tighten tf up

Forget Saweetie going to the pits of hell w Quavo homeboy. The homeboy was LIL BABY?!?! Bitch you supposed to RAISE the standard omg 🤦🏽‍♀️🤦🏽‍♀️

Let me add Lil Baby, Quavo, Offset, Saweetie, and Migos to by muted words lists on here… My whole feed is think pieces on who the line is about and i dont give a damn.