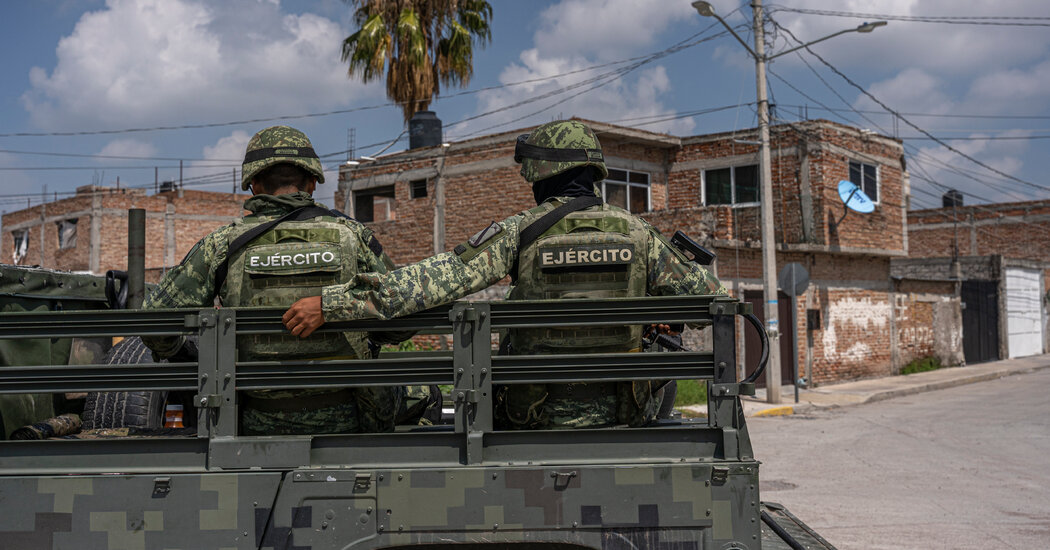 A major hack targeting Mexico’s Defense Ministry has shed light on the country’s most secretive and powerful institution, documenting its expanding influence over the civilian government, attempts to evade cooperation on a landmark human rights investigation and spying on journalists using the spyware known as Pegasus.

Detailed in the data breach are the military’s own internal probes and suspicions that powerful government officials, like state governors and the current interior minister, are linked to organized crime networks, including drug cartels.

As journalists in Mexico search through the enormous hack, the information revealed in news articles so far has illuminated the military’s growing hold over civilian institutions and its close relationship with President Andrés Manuel López Obrador.

The Mexican military has a history of human rights abuses and massacres of civilians, and has long resisted oversight and accountability. The leaked emails show — in military officials’ own words — how the institution maneuvers to sidestep the government, empower itself and protect its own members, however junior.

The leaks were released by a hacker group known as Guacamaya, or macaw in Spanish, and include some six terabytes of data of over four million emails. In a manifesto released online, the hackers claimed they were an anti-imperialist group seeking to protect the environment. What country they operate from is unknown, but they communicated in Spanish.

This week, Mr. López Obrador acknowledged the hack and said “there is nothing to hide.”

The military did not respond to requests for comment.

Despite warnings from politicians and analysts that the military is becoming too powerful under Mr. López Obrador, the senate voted this week to renew the military’s role as Mexico’s lead institution in charge of public security. The bill now heads to the president’s desk for his signature.

“Mexico’s armed forces are known as the least transparent institution, and these leaks come at a critical moment as the Mexican government is deepening the military’s involvement in civilian life and institutions,” said Stephanie Brewer, the Mexico director at the Washington Office of Latin America, a research institution.

The leaked emails reveal that the military was using Pegasus, an Israeli spyware, to infect the phones of journalists and an activist, despite Mr. López Obrador’s promises that his government would not use the malware to spy on Mexican citizens. The New York Times first revealed that the previous administration had used Pegasus to spy on journalists, activists and politicians, a scandal that rocked the government.

“The military’s power vis-à-vis institutions is a matter of great concern, as it is receiving more budgetary resources from the government,” Ms. Brewer said.

The military also launched investigations into and created files on current and former government officials and their links to organized crime and Mexico’s powerful drug cartels. The governor of the state of Veracruz, Cuitláhuac García, is reported to have links to a powerful cartel, an accusation he denied this week.

In the hacked emails, Defense Ministry officials accuse the current Interior Minister, Adán Augusto López, of giving top security positions to officials linked to organized crime when he served as the governor of Tabasco state. A spokesman for the ministry declined to comment.

The leaks also reveal widespread sexual assault in the armed forces, with over 300 military personnel accused of harassment and other rights violations, which the top brass kept secret over the years.

The expansion of the military’s power also came after a government truth commission in August officially said the military was involved in the disappearance of 43 students from a rural town called Ayotzinapa.

The email hack displayed for the first time the extent to which the military has used its power and connections to shield itself from oversight in the Ayotzinapa case.

An email detailed an appeal from the current defense minister to President López Obrador, pleading the innocence of a low-ranking captain who is a suspect in the students’ disappearance. The defense minister appeared to support the captain’s refusal to cooperate in the government probe.

Another leaked email sent in 2015 also detailed a top general’s request to the defense minister at the time to “prevent excavations” inside the military barracks where some of the 43 students may have been taken. What ultimately happened to all the students is a mystery, but they are believed to be dead, the whereabouts of their bodies unknown.

“What the emails have made obvious is the military’s deliberate actions to avoid civilian oversight, even for a low-ranking captain,” said Cecilia Farfán Méndez, a Mexico security researcher at the University of California, San Diego. “They fear if they open the door and allow civilian oversight into one case, that it will open the flood gates in the future.”

The trove of hacked emails also details the military’s expansion into the economy.

Since coming to power in 2018, Mr. López Obrador has relied on the military to build most of his giant infrastructure projects, totaling some $45 billion, and has announced plans to hand over their operation and revenue to the armed forces once they are completed.

The government has paid the armed forces to construct a nearly 1,000-mile railway, an international airport and an oil refinery, in contracts yet to be publicly released.

But the Defense Ministry’s business ambitions appear to be larger than previously known. The data breach revealed that the ministry plans to create a national tourism agency, with hotels, parks, museums and even a national airline that the armed forces would operate.

“The profits of that company will be used for pensions for members of the armed forces,” the president said this week, confirming the Defense Ministry’s move into the tourism sector. “It will protect the nation’s assets.”

The military’s growing power has unnerved many politicians and analysts, who warn that it could lead to more human rights abuses. Instead, they have called for the creation of a national police force overseen by the civilian government.

By expanding into the country’s economy, politicians and analysts say, the military could be further shielded from government oversight since it will no longer need to rely on elected officials to pass annual budgets to stay afloat.

Mexico has been a relatively stable nation for decades because of the civilian government’s ability to exert its control over the military, which allowed the country to avoid the army-led coups that roiled much of Latin America during that time.

But the military was given an outsized role in public security in 2006, under President Felipe Calderón, when he deployed the armed forces across the country to combat drug cartels. The military’s role and deployment was to be temporary, as Mr. Calderón’s administration established and developed Mexico’s first federal police force, which was supposed to eventually take over public security.

The Federal Police was established in 2010 and faced a rocky start, including accusations of human rights abuses and corruption. But, analysts say, the nascent force was slowly improving.

In 2019, Mr. López Obrador dissolved the Federal Police and created the National Guard, which will now be rolled into the military.

“While each administration has grappled with how to improve the police, the real concern with this administration is that they have abandoned the goal of developing a civilian public security force,” Ms. Farfán said.

“Instead, so much is being given to the military, and the militarization of Mexico is in full force.”