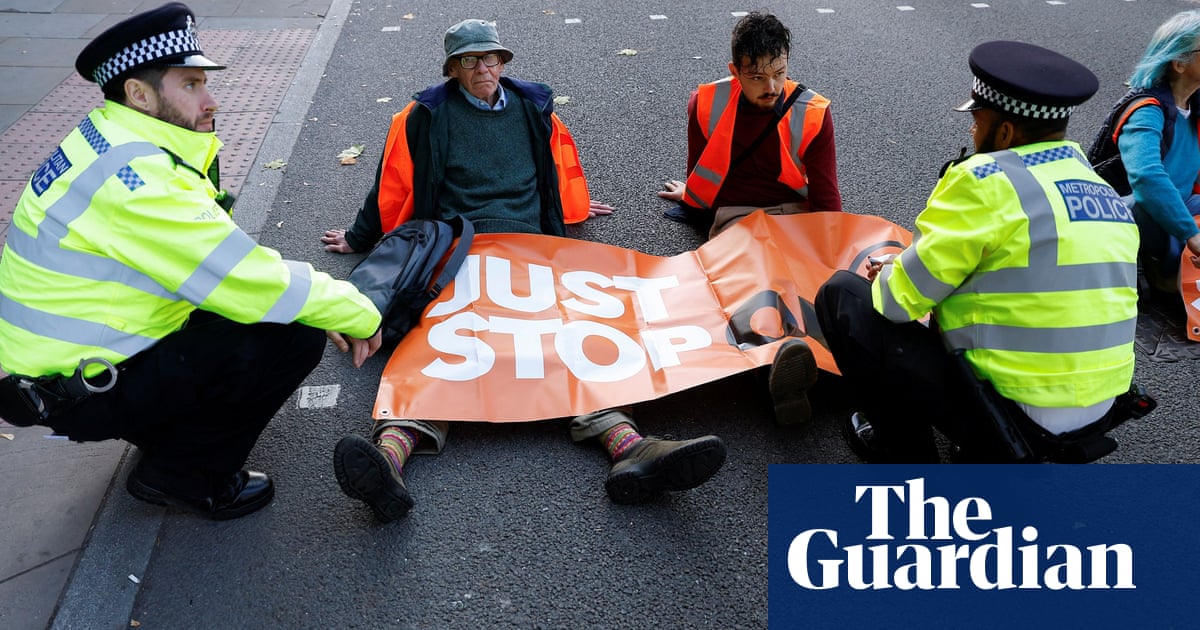 Two dozen environmental protesters have blocked central London roads for a seventh day, continuing a week of disruptive action that has led to at least 150 arrests.

Just after 10am on Friday, several groups of supporters of the Just Stop Oil campaign blocked roads leading to Vauxhall Bridge. They glued themselves to the road and displayed banners.

Just Stop Oil, which earlier this year staged weeks of direct action against oil terminals, has vowed to “occupy Westminster” with daily roadblocks until the government agrees a moratorium on all new oil and gas projects.

But their latest direct action came as the government opened up a new licensing round to allow oil and gas companies to explore for fossil fuels in the North Sea. On Friday, the North Sea Transition Authority offered 898 blocks of the UK seabed for exploration.

Despite overwhelming, longstanding international concern about the impact that the continued burning of fossil fuels is having on the world’s climate, Graham Stuart, the climate minister, on Friday morning said the development would be “actually good for the environment”.

Last year the International Energy Agency said that if climate change was to be kept within 1.5C there could be no new investments in fossil fuels.

Among the protesters on Friday was Grace Lally, 43, a childcare worker and mother of two from Hastings. She said: “We all know the science and the facts, so our leaders who are doing nothing to transition away from fossil fuels are either fools or psychopaths.

“Either way, I’m not prepared to let them lead us over a cliff without putting up a fight. We are nonviolent but we must use every means in our power – protests, strikes, occupations – to try to stop the fossil fuel companies and their political defenders from destroying everything we love.”

Friday’s action is the seventh day in a row that supporters of Just Stop Oil have caused disruption on central London’s streets. According to figures provided by the Metropolitan police, 35 people were arrested in connection with their protests on Sunday, 59 on Tuesday, 24 on Wednesday and 32 on Thursday.

No protesters were arrested on Saturday or Monday, despite disruptive actions also being taken on both those days. The Guardian has asked the Met for an update on the number of arrests of protesters on Friday.

Just Stop Oil has said it has teams lined up to take turns mounting human roadblocks in Westminster for weeks to come, and has claimed it is constantly training new supporters to take direct action. Activists inside the group told the Guardian they believe the strategy is more sustainable than the oil refinery protests in April, which petered out after several weeks due to exhaustion and increasingly stringent police and legal action.

A Just Stop Oil spokesperson said: “We will continue in civil resistance because it is the right thing to do when faced with a harmful government. The coming weeks will see the disruption in the capital increase until the government makes a statement to end new oil and gas.

“Beginning the process of winding down fossil fuel production in this country is not rocket science, it’s not brain surgery. The government is throwing water on the fire that is destroying our only home.”