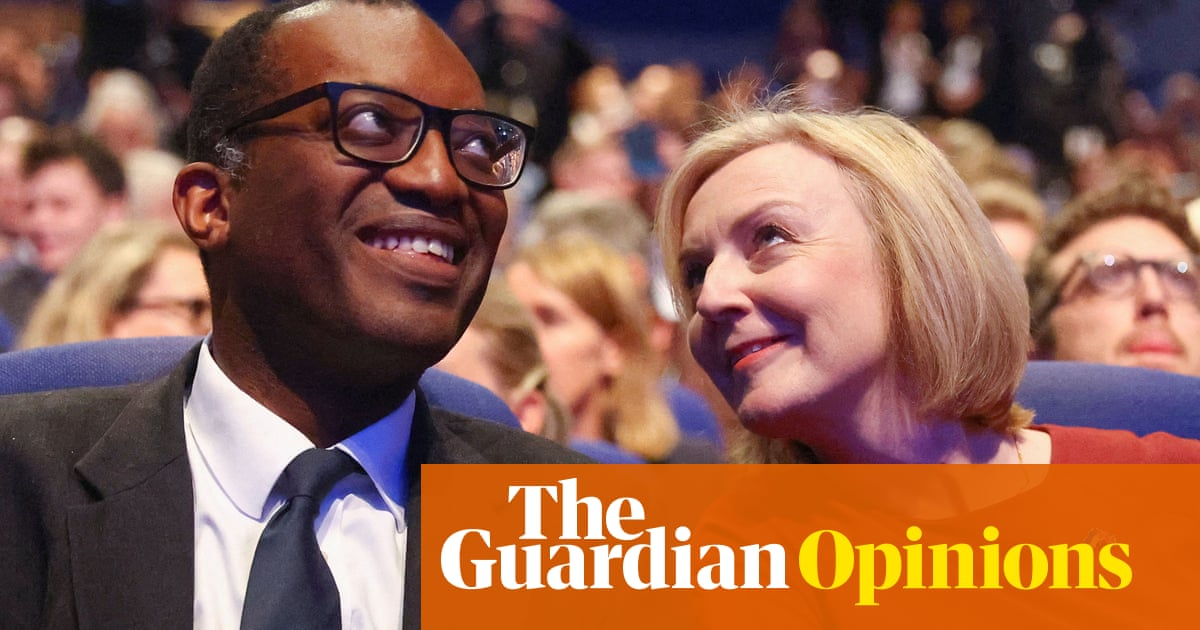 This year’s Tory party conference seemed to be taking place in a space-time continuum where any number of alternate realities were possible. There might even have been one where Liz Truss and Kwasi Kwarteng were uniting their party with a massive opinion poll lead over Labour. After all, in a parallel universe where we might be living in the future, a lie is only a truth waiting to be told. Take Truss’s absolute denial on Sunday that she would cancel the planned cut in the top rate of tax. Within 24 hours she had U-turned. It was hard to keep up. Weirdest of all was Nadine Dorries declaring that Truss had no mandate for her madness. Who would have guessed there was a reality where Nadine was the moral conscience of the Tory party?

Queen Elizabeth wasn’t the only one to die on 8 September. One of our cats, Buzz, also died that day. Or, to be more exact, she was euthanased. She had been off her food and hadn’t been using her litter box for several days, so we had taken her to the vet. She did various tests, told us Buzz had acute renal failure and advanced cancer and that it would be kindest to have her put down. That was in the morning. Having gone home to think things over, my wife took Buzz back to the vet in the afternoon. Buzz was purring in Jill’s arms as the needle pierced her skin. We had got Buzz – and her sister Jessie – from Battersea Dogs and Cats Home more than 17 years ago after emotional blackmail from our son. Our previous cat, Daley, had died about six months previously, and Robbie begged us for another one, saying “it would be so nice to have something alive in the house when I get back from school”. He obviously didn’t consider the childminder who picked him up and made him his tea to be human. But we fell for it and got the cats. Jessie and Buzz couldn’t stand each other and ignored one another throughout their lives, having divided up the house into separate territories. But when Jill came back from the vet without Buzz, for the first time in her life Jessie pissed on my wife’s rucksack. It was clearly a dirty protest. Yet since then, Jess has shown no sign of having missed her sister at all. Far from it. She actually appears delighted by Buzz’s demise and has become far more sociable. A longer period of mourning might have been in order.

Expectations for Liz Truss’s conference speech were ridiculously low. Just try to remain upright, don’t let the scenery collapse around her and try to get the words out in vaguely the right order. Hoping that she understands the basics of punctuation was always a bar too high. So on these measurements, it must be considered a success. The Greenpeace protest probably helped as it made everyone in the hall feel sorry for her, so they all clapped a bit louder from then on. But by any other standards it was predictably hopeless. Little more than a director’s cut of her leadership campaign speech with added awkward emphases. Delivered by someone whose strange hand-chopping movements made it look like she was a 1960s TV puppet. Thunderbirds Aren’t Go! Welcome to Trussia! Worse still, nothing much made sense. She said “we must stay the course’, forgetting she had U-turned several times in three days, then she moaned about the last government as if Labour had been in power for 12 years. She also declared war on the “anti-growth coalition” which appeared to be just about everyone, including most of the Tory party, who thought she was hopeless. So count me in. With the conference over, I drove back down the M40 to the headquarters of the anti-growth coalition. Also known as the launch of the wonderful Marina Hyde’s superb new book, What Just Happened?. Do buy a copy. Sanity will be restored. If only temporarily.

I’m definitely old-school when it comes to art. When I buy a piece of ceramic I expect to be able to take it home. Even if I’ve no idea where I am going to put it as we’re rather running out of shelf space. But Damien Hirst has other ideas for buyers who either have nowhere to put their art works or have too much cash to spend. According to the critic Waldemar Januszczak, Hirst last year banged out 10,000 carelessly splodged dot paintings, knowingly entitled The Currency, and put them all up for sale at $2,000. Even though Hirst had probably spent 10 minutes – if that – on each one, the entire collection soon sold out. Nice work if you can get it. But here’s where it gets surreal. Hirst then told everyone who had coughed up that they could either have the painting itself – that was big of him – or a non-fungible token instead. And 4,851 have taken him up on the offer for NFTs. To mark this level of gullibility, Hirst is going to burn the 4,851 paintings at the Frieze art fair in London later this month. It’s unclear whether the half-witted collectors will be presented with their share of the ashes, though they presumably will get a certificate to hang on the wall, saying “I bought a not very good painting for $2,000 and then burnt it”. Knowing the art market, we’ll probably find the NFTs are worth more than the daubs in a few years’ time.

The National Grid has warned there may be three-hour blackouts this winter. The government is trying to play it down but presumably no one would have mentioned it if it wasn’t a genuine possibility. I was 17 when there were regular energy shortages during the three-day week of the Heath administration back in 1973/4, so you would have thought I would remember it quite clearly. But it’s all just a bit of a blur and I suppose we must have muddled through. It also might be because it didn’t make too much difference. My parents lived in a large vicarage and the Church Commissioners wouldn’t allow them to extend the fairly ropey central heating system to any of the upstairs rooms. So it was fairly common for us all to wake up with ice on the inside of the window. Getting out of bed first thing in the morning was an ordeal. This time round we won’t be getting any advice on how to survive the energy crisis as Truss has said she is “ideologically opposed” to it. Ideologically opposed to what exactly? Saving people money? Helping everyone to stay warm? She’s a strange woman. And getting stranger. In our household it’s usually me who’s sneaking out to turn up the thermostat and my wife who is turning it down and telling me to put more clothes on. But even I am already becoming more cost conscious. Our first life hack has been to block the chimney with the dog’s cushion. Herbert Hound has been unimpressed, even when we’ve told him his is the only cushion large enough for the job and has taken to sitting on the sofa in protest. It’s going to be a long winter.