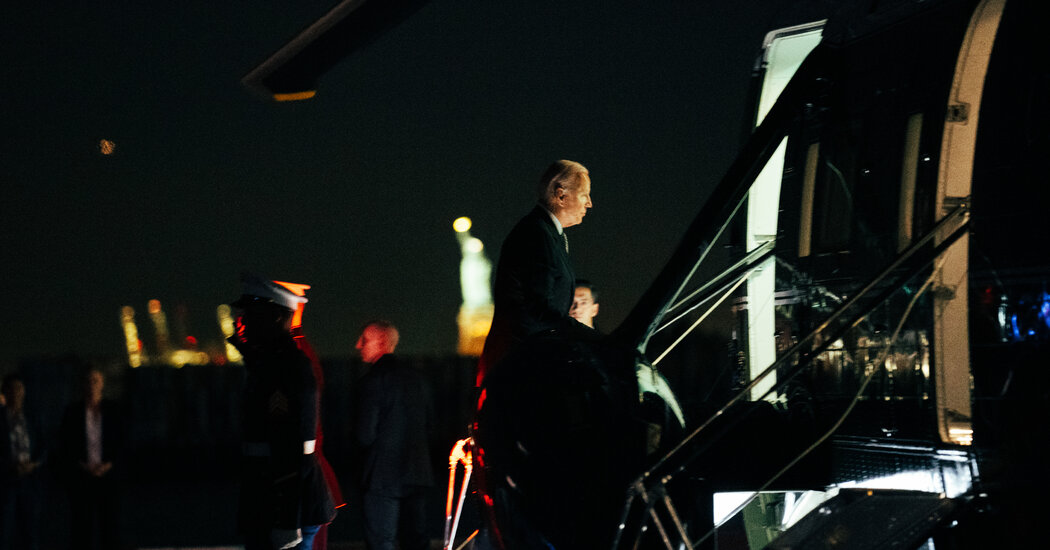 President Biden delivered a striking warning on Thursday night that recent threats from President Vladimir V. Putin of Russia could devolve into a nuclear conflict, telling supporters at a fund-raiser in New York City that the risk of atomic war had not been so high since the 1962 Cuban Missile Crisis.

“We have not faced the prospect of Armageddon since Kennedy and the Cuban Missile Crisis,” Mr. Biden told a crowd at the second of two fund-raisers he attended on Thursday evening.

Mr. Biden’s references to Armageddon were highly unusual for any American president. Since the Cuban Missile Crisis, 60 years ago this month, occupants of the Oval Office have rarely spoken in such grim tones about the possible use of nuclear weapons, much less talked openly about “off ramps.”

The president’s warnings, delivered bluntly to a group of Democratic donors rather than in a more formal setting, came as analysts in Washington have been debating whether Mr. Putin might resort to tactical nuclear weapons to counter his mounting military losses in Ukraine.

In an angry and fiery speech last week, Mr. Putin raised the specter of using nuclear weapons to hold on to his territorial gains, which Ukraine’s powerful counteroffensives have begun to erode. Mr. Putin said he would use “all available means” to defend Russian territory — which he has declared now includes four provinces of eastern Ukraine that Russia illegally annexed in recent days.

The atomic bombs the United States dropped on Japan in 1945, Mr. Putin said in that speech, had “created a precedent.”

His remarks and others by top Russian leaders represent the first time since 1962 that Moscow officials have made explicit nuclear threats.

Officials in Washington have been gaming out scenarios in which Mr. Putin might decide to use a tactical nuclear weapon to make up for the failings of Russian troops in Ukraine. In late February, Mr. Putin called for his nuclear forces to go on alert, but there has been no evidence that they did so.

Contrary to Mr. Biden’s comparison, American officials say they do not believe this moment is as fraught as the Cuban Missile Crisis, during which Mr. Kennedy declared a quarantine of Cuba to stop the delivery of nuclear weapons to the island. The chances of Mr. Putin using an atomic weapon remain low, they have said.

But they are clearly worried that Russian military doctrine treats tactical weapons as a potential element of conflict between ground forces. And it was that doctrine that Mr. Biden indicated he is most concerned about, because of the chances of rapid escalation.

Tactical weapons come in many sizes and varieties, most with a small fraction of the destructive power of the bombs the United States dropped on Hiroshima and Nagasaki in 1945. But they are hard to use and are difficult to control. On Thursday, Mr. Biden said he did not think it would be possible for Russia to use a tactical weapon and “not end up with Armageddon.”

“We’ve got a guy I know fairly well,” Mr. Biden said of Mr. Putin at the fund-raiser. “He’s not joking when he talks about potential use of tactical nuclear weapons or biological or chemical weapons because his military is you might say significantly underperforming.”

In late September, Mr. Biden’s national security adviser, Jake Sullivan, said that any nuclear weapon use would result in “catastrophic consequences” for Russia, adding that in private communications with Moscow, the United States had “spelled out” how America and the world would react.