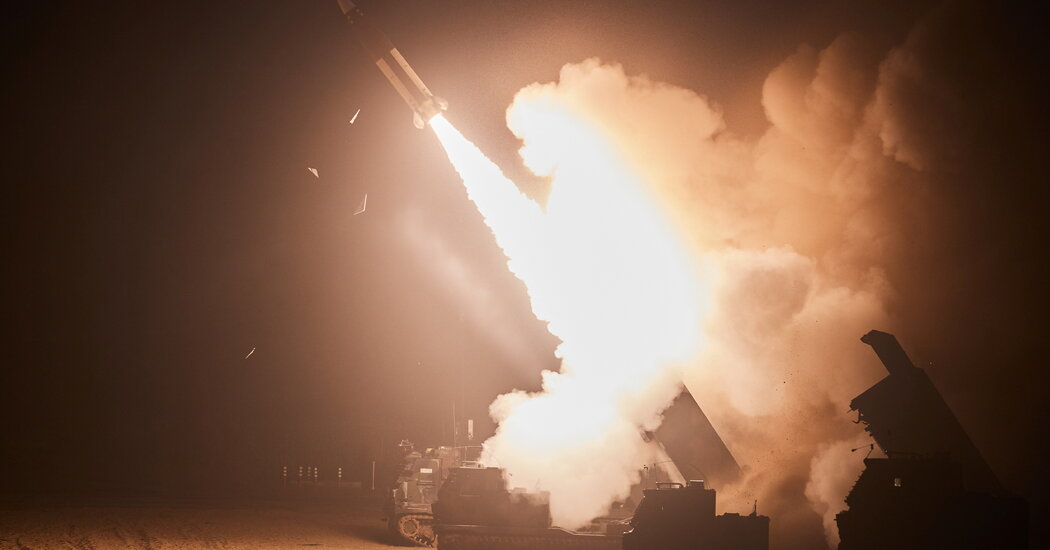 Since Russia’s invasion of Ukraine, Pentagon officials have sent the Ukrainian military an array of equipment totaling billions of dollars. But one powerful weapon, called the Army Tactical Missile System, has become part of a debate about the limits of U.S. support for its ally.

The long-range missile — known as ATACMS and pronounced like “attack ’ems” — can strike targets 190 miles away with a warhead containing about 375 pounds of explosives. It can be fired from the HIMARS mobile launchers that the United States has provided Ukraine, as well as from older M270 launchers sent from Britain and Germany.

Ukrainian officials say the missile could help them regain Crimea, a part of the country that Russia seized in 2014. But Pentagon officials insist they are already giving Ukraine the weapons it most needs: Guided Multiple Launch Rocket Systems, or GMLRS.

And this week, a senior Pentagon official said that the guided rockets, which the United States has sent Ukrainian forces by the thousands, can reach most of their targets, even in Crimea.

Why has this weapon been such a sensitive issue?

It comes down to this: concern in the White House that Ukraine could use the long-range missile to strike targets deep inside Russia, and that President Vladimir V. Putin might respond by escalating the war, possibly by invading a neighboring NATO country.

But President Volodymyr Zelensky of Ukraine says the weapon is crucial to his country’s ability to launch a wider counteroffensive after its recent advances. He has also insisted that he has no plans to strike Russian cities or target civilians.

What is this thing?

The missile was developed in the 1980s to destroy high-value Soviet targets deep behind enemy lines. It was built as a rare guided weapon at a time when the United States mainly relied on “dumb bombs” and other unguided munitions for attacking targets on the ground.

A spokeswoman for Lockheed Martin said that the company has built 60,000 GMLRS and 4,000 ATACMS to date, some of which have been sold to foreign allies. A senior defense official told The New York Times that the United States can more easily part with the less expensive guided rockets, given that the Pentagon’s tactical missiles are all reserved for top secret war plans in places like the Korean Peninsula.

Because ATACMS is the U.S. Army’s longest-range surface-fired weapon, it has traditionally been used in missions approved by three-star generals for the highest-priority targets on a battlefield. Lower-ranking officers are allowed to launch guided rockets as needed in combat.

What was ATACMS built for?

The missile was originally designed to destroy enemy surface-to-air missile defense weapons by blanketing them with hundreds of individual bomblets.

Today, the Pentagon has two versions of the ATACMS in its inventory — the cluster weapon and one that carries a single explosive charge.

Because of the high dud rate of the bomblets carried in the cluster weapon version, the Pentagon would probably provide allies with only the variant containing a single high-explosive charge.

ATACMS is also the Army’s oldest surface-launched missile currently in service, and a prototype of its replacement is being test-fired at White Sands Missile Range in New Mexico. That weapon, called the Precision Strike Missile, will fly to ranges previously barred by the Intermediate-Range Nuclear Forces Treaty.

Since the Trump administration chose to exit that pact in early 2019, the Pentagon has accelerated development of the Precision Strike Missile, which is smaller and can fly much farther than its predecessor. Two can fit into the same size container that carries a single tactical missile.

Has the U.S. used them in combat?

Yes. The U.S. military fired around 30 ATACMS in 1991 during Operation Desert Storm, according to government records. They were used to strike Iraq’s medium-range ballistic missile launchers and surface-to-air missile sites.

Those first-generation cluster munition versions could fly about 100 miles. Once over their targets, they released 950 bomblets.

Why does Ukraine want it?

One word: range. And given that it is the Army’s longest-range ground-fired missile, and that the United States does not have very many of them, providing it to Ukraine could be seen as a sign of America’s commitment to Kyiv.

Compared with the GMLRS, the version of the ATACMS that Ukraine wants carries an explosive warhead that is about 50 percent larger and can strike targets more than three times as far.

The tactical missile is much larger though, about 13 feet long and 2 feet wide, and weighs about 3,000 pounds. As a result, a mobile launcher like the M142 HIMARS can carry six guided rockets but only one tactical missile at a time.

Gen. Mark A. Milley, the chairman of the Joint Chiefs of Staff, said the Ukrainians need the guided rockets more than they need to be able to attack at longer ranges.

“Volume matters,” General Milley told reporters in July. He said that both weapons were “very effective,” but that right now the GMLRS were “really fulfilling their need.”