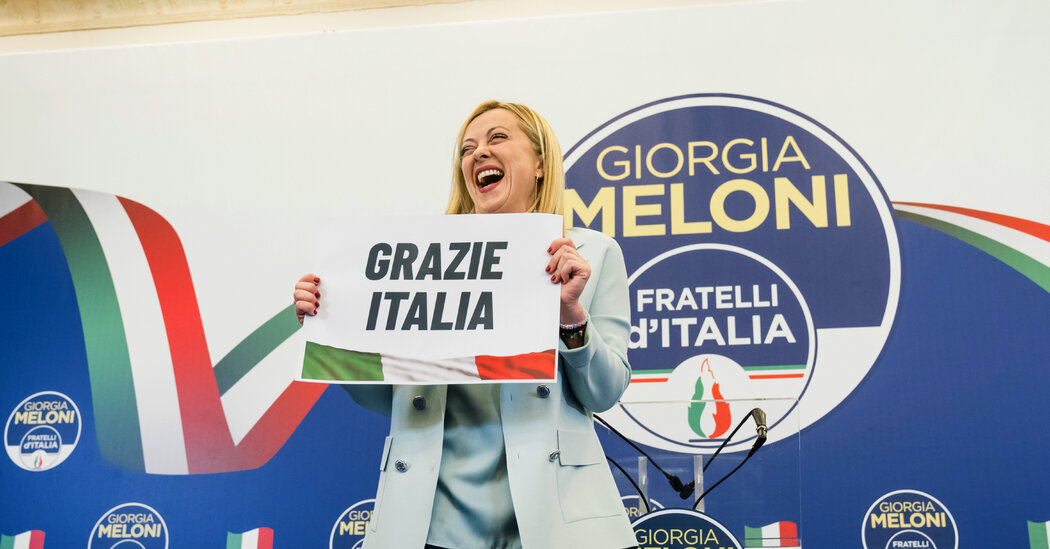 Italy, the world’s eighth-largest economy, elected a far-right government last week, with Giorgia Meloni as the likely next prime minister. It’s part of a trend: Her victory came shortly after Swedish elections that led to a far-right party becoming the second-largest in Parliament there.

To help you understand why Meloni won and what may lie ahead, I spoke with Jason Horowitz, The Times’s Rome bureau chief.

David: What was the main reason for Meloni’s victory?

Jason: The real secret to Meloni’s appeal was not any particular policy or vision. In Italy, every election is a change election, and being the candidate of the protest vote is a powerful thing. Meloni was that. The other major candidates had all been part of Mario Draghi’s national unity government. She stayed in the opposition and vacuumed up the protest vote. She won with about 26 percent.

Meloni’s appeal is also based heavily on grievance — the grievance of workers left behind by the globalization of which she is ideologically suspicious.

David: How would you compare Meloni with Donald Trump?

Jason: Despite her past admiration of Trump, and her closeness to the Republican Party — she has spoken at CPAC — she is different. Whereas Trump was the scion of a real-estate mogul, Meloni grew up in the leftist working-class neighborhood of Garbatella — and made it as a right-wing post-Fascist youth activist. She has a rough Roman accent, which could be compared to an old Brooklyn accent. And as a woman she had to overcome a lot. It all screams tough.

Jason: Her party’s main proposals are deep tax cuts, including for lower earners. On top of that, she wants to increase pension payouts and cut taxes for working mothers. She talks about increasing the low birthrate as a way to talk about Italians being proud again — being patriots who prosper and multiply. To help them multiply, she believes the government needs to help.

Still, Meloni’s platform is not anti-rich. She won the working-class vote — and also the rich vote. She is in a coalition with Silvio Berlusconi, the former prime minister, who has been talking about tax cuts for 30 years, and other allies of businessmen from northern Italy. In all, Meloni’s proposals would blow a big hole in the budget.

David: Meaning that she has not also proposed spending cuts?

Jason: She has targeted one big economic benefit for cuts — “reddito di cittadinanza,” or citizenship income. It is a welfare benefit, enacted a few years ago, that pays hundreds of euros a month to people who don’t work. It has proved enormously popular in Italy’s disadvantaged southern regions, but its critics, including Meloni, see it as a handout that promotes laziness and crime.

Her opposition to the benefit probably cost her votes in the south. By contrast, the Five Star Movement, another anti-establishment party that seemed to be fading, defended the benefit and did well in the south.

David: In Italy, the foreign-born share of the population has surged over the past couple of decades. Was that subject part of Meloni’s message?

Jason: Even though there has not been an uptick in migrant arrivals of late, immigration is now a talking point of the Italian right. Meloni has talked about replacement of native Italians by illegal migrants. She has talked about invasion. I heard her tell workers that international bankers are driving mass migration to weaken their rights by replacing them with cheap migrant labor.

Immigration has been in the populist ether here since 2014 or so, when Italy had a wave of illegal migration land on its shores. Italy’s center-left leader at the time appealed to the European Union for help and didn’t get it. So it could be argued that Brussels had a hand in creating the populist wave that it so fears.

The left has failed to come up with a response on the issue, and even the more moderate or liberal governments in France and Spain are emphasizing enforcement. Left-wing parties are in a tough position, in which they can’t give up on integration, because it is central to their values. But emphasizing it may hurt their electoral chances.

David: How much reason is there to worry that Meloni might govern in an anti-democratic way and trample on human rights?

Jason: There is a feeling that even if she wanted to go the way of Viktor Orban in Hungary, she could not because Italy is so integrated into the European Union, and so dependent on hundreds of billions of euros in funds. She has also been a consistent voice for democratic elections. (The Times’s Steven Erlanger explains the E.U.’s fears.)

People are concerned about gay rights and perhaps abortion rights. She is against gay marriage and opposes adoption by gay couples, arguing that only a married man and woman can give a child its best shot. She herself is an unwed mother with a longtime boyfriend and says she should not be allowed to adopt either.

On abortion, Meloni has told me she believes abortion should remain safe, accessible and legal, but she wants to increase prevention. That has raised concerns that Meloni would make it more difficult to have abortions in a country where it can already be hard, because so many doctors contentiously object to it.

For more: Meloni has been a full-throated supporter of Ukraine, but her coalition partners have sounded like Russia apologists. What happens now?

A programming note from David: This is my last week before a book leave. Starting this weekend, other Times journalists will be writing The Morning, and I’ll be back in your inboxes in late January.

Decades of fan speculation: Velma of “Scooby-Doo” fame is canonically a lesbian.

Royal strife: Denmark’s queen stripped four of her grandchildren of their titles. She apologized, but won’t change her mind.

A Times classic: Wolf puppies are adorable. Then the wild calls.

Advice from Wirecutter: Set up a TV at a tailgate.

Lives Lived: Kitten Natividad had little film experience when the director Russ Meyer, known for outlandish films with absurd plots, cast her. He later made her the star of “Beneath the Valley of the Ultra-Vixens.” She died at 74.

SPORTS NEWS FROM THE ATHLETIC

N.W.S.L. execs dismissed: The Portland Thorns fired two top executives after a report about abuse in the National Women’s Soccer League. The Chicago Fire also removed its owner as board chairman.

How do you make the most out of a weekend in New York City? The Times’s 36 Hours feature is back with recommendations: Start on Friday with 400 years of history at the Museum of the City of New York in East Harlem, stop at Marie’s Crisis Café in the West Village on Saturday evening for drinks and singalongs, and end with a Sunday lunch at Chinatown’s renowned Golden Unicorn.

It’s the first weekly 36 Hours feature in more than two years, since the pandemic shut down nearly all travel. Why New York? “It’s The New York Times!” said Tacey Rychter, a Times travel section editor. “Why not kick off in The Times’s hometown, and in a place that has seen so much adversity and change in the past couple of years?”

Mapo ragù is kind of Korean, kind of Chinese and kind of Italian.

In “Looking for the Hidden Folk,” Nancy Marie Brown makes a case for everyday wonder.

And here’s today’s Wordle. After, use our bot to get better.

Thanks for spending part of your morning with The Times. See you tomorrow. — David

P.S. A hidden haiku from a Times story about Little Amal, a 12-foot-tall puppet of a Syrian refugee: “Looking up, all you / see is her huge face, with those / big, brown, blinking eyes.”

“The Daily” is about inflation. On the Modern Love podcast, a Deaf man’s love language.

Sign up here to get this newsletter in your inbox.