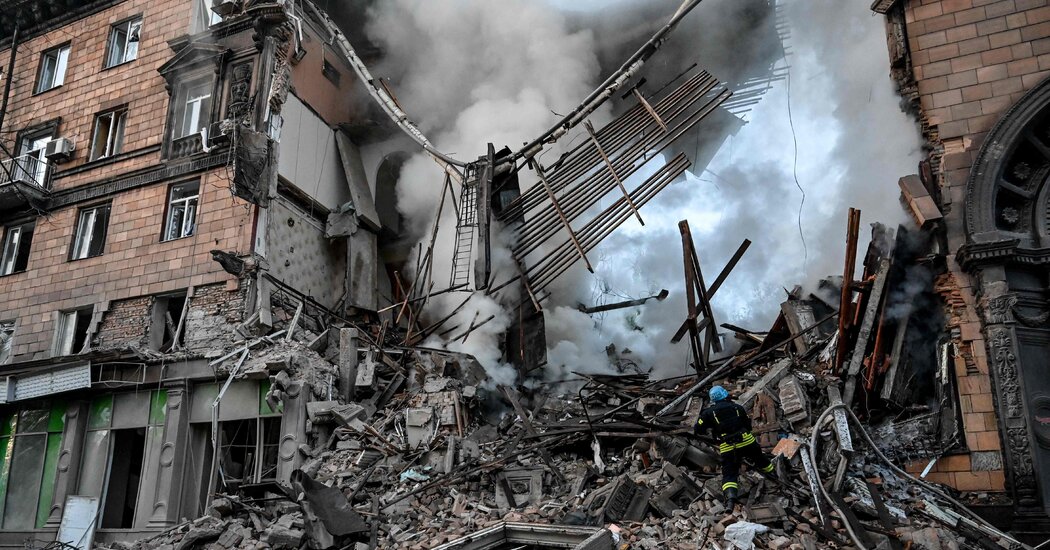 Deadly Russian strikes on Ukrainians far behind the front lines and new concerns about the safety of an endangered nuclear power plant highlighted questions about how Vladimir V. Putin’s government, with its troops retreating and dissension escalating at home on Thursday, might lash out if its battlefield losses continue.

As Ukraine claimed to retake more towns and villages in the south and east, missiles hit a residential area in the city of Zaporizhzhia, killing at least seven people, with five others missing — the latest in a series of attacks on civilian targets far from the fighting.

Ukrainian and Western analysts say Russian attacks on civilian targets, have grown more indiscriminate, serving little military purpose but reminding people that no part of the country is safe. Less than a week ago, a rocket blast killed at least 30 civilians in Zaporizhzhia at a checkpoint and a bus stop, officials said.

A day after the Kremlin announced that it would “nationalize” the Zaporizhzhia Nuclear Power Plant it has seized in Ukraine, the United Nation’s top atomic energy official said on Thursday that he could not recognize any change of ownership of the plant, which he described as unlawful and destabilizing. And he said a nuclear accident there is “a very, very clear possibility.”

Russia may yet prevail in the war that Mr. Putin launched in February — it still has superior firepower and numbers, and control of a significant amount of Ukrainian territory. But its military position in Ukraine has worsened in the past month, and as it has, Mr. Putin has repeatedly escalated the war, in words and deeds, rather than seek a way out.

Ukrainian advances have drawn a chorus of outrage from Russian hawks, a remarkable departure in a country where dissent is often treated as a crime. They have accused top officials of incompetence and dishonesty, and have demanded that all of Russia be put on a war footing. One Russian official in an occupied part of Ukraine even suggested on Thursday that the defense minister shoot himself.

At the same time, Mr. Putin’s military draft has prompted widespread protests and an exodus of young men from the country, as word filters past Russian censorship that the troops are suffering heavy casualties, loss of territory, inadequate equipment and terrible morale. Some people fear or oppose the war, and as Mr. Putin has acknowledged, bungling has led to the conscription of many ineligible men. After he announced the draft on Sept. 21, the Kremlin said it would call up 300,000 men, though Russian news outlets have reported that it could be many more.

Under growing pressure, Mr. Putin and his allies have suggested that Russia could use nuclear weapons. That has alarmed officials in Europe. In Washington, American officials think it is probably a bluff, but a possibility they need to treat seriously.

And in a bellicose speech last week, Mr. Putin accused the United States of “satanism,” referred to Western leaders as “the enemy” and cast the war as a fight for Russia’s survival — a far cry from his original claims to be protecting ethnic Russians in Ukraine and ridding Ukraine of fascists.

This week, his government completed the formalities to illegally annex four regions of Ukraine that it does not fully control, even as it loses ground there and Mr. Putin’s own spokesman conceded that the boundaries were unclear. The Kremlin has signaled that with the annexation, which would follow staged referendums, it will now claim that Ukrainian military action in that part of Ukraine is an attack on Russian territory, justifying a harsh response.

As they advance, Ukrainian forces have found scenes of destruction and evidence of atrocities. Officials in the Kharkiv region said on Thursday that they had found 534 bodies of civilians in areas the Russians had taken and then lost, mostly in the city of Izium, and 22 locations they suspected had been used as torture chambers.

On Thursday, the Swedish government said its investigators had confirmed that explosions caused the damage to leaking natural gas pipelines under the Baltic Sea, and said they had gathered evidence, but did not elaborate. Seismologists had reported detecting the detonations on Sept. 26 when the Nord Stream pipelines, which carry natural gas from Russia to Germany, ruptured.

Some European officials have speculated that Russia could have sabotaged its own lines to amplify Europe’s fears of energy shortages, which would be escalation of a different kind.

In Prague, leaders of the 27 European Union nations, meeting on Thursday, formally approved a plan engineered by the Biden administration to cap the price they pay for Russian oil. The action is an attempt to limit Kremlin revenues without an embargo that could cause fuel shortages and higher consumer prices. But a day earlier, Russia and the OPEC cartel of major oil-producing countries agreed to cut their output, in an effort to drive up prices.

When the Russian invasion began more than seven months ago, the Kremlin — and much of the world — expected that Ukraine’s military would be defeated in a lightning assault and its government toppled in a matter of weeks, if not days. But after embarrassing setbacks, Moscow settled on a slower offensive to take what it did not already hold of eastern Ukraine, the area known as Donbas. Despite heavy losses, the Russians made gains into the summer.

But since then, a stunning Ukrainian counteroffensive, aided by Western weapons, has shown the Russian military to be weaker and in greater disarray than it appeared early in the war.

First in the Kharkiv region in the northeast, then the Donetsk region in the east and the Kherson region in the south, and now edging into the easternmost region, Luhansk, Ukraine has retaken what it says is more than 3,000 square miles that had fallen to Russia. Donetsk, Luhansk and Kherson are three of the four regions Russia claims to have annexed.

In the fourth, Zaporizhzhia, lies Europe’s largest nuclear power plant, captured early in the war by Russian troops but still operated by Ukrainian engineers, who are stretched thin and under growing strain.

The plant — the first of its kind to be in an active war zone — has been damaged repeatedly by shelling, raising the risk of a radiation leak or even a nuclear meltdown. There have been reports of Russian abuse of people in the town where the plant workers live, and Russian forces recently detained the head of the plant for a few days, for reasons that remain unclear. Russian officials have said they will cut the Zaporizhzhia plant off from the Ukrainian power grid, which nuclear experts say could introduce dangerous instability.

Speaking a day after the Kremlin said it would take ownership of the plant, Mr. Grossi, whose agency has safety experts stationed at the plant, said, “Of course, the position of the I.A.E.A. is that this facility is a Ukrainian facility.”

“This is a matter that has to do with international law,” he said.

Reporting was contributed by Oleksandr Chubko and Carlotta Gall from Kharkiv, Ukraine, Matina Stevis-Gridneff from Prague and John Yoon from Seoul.