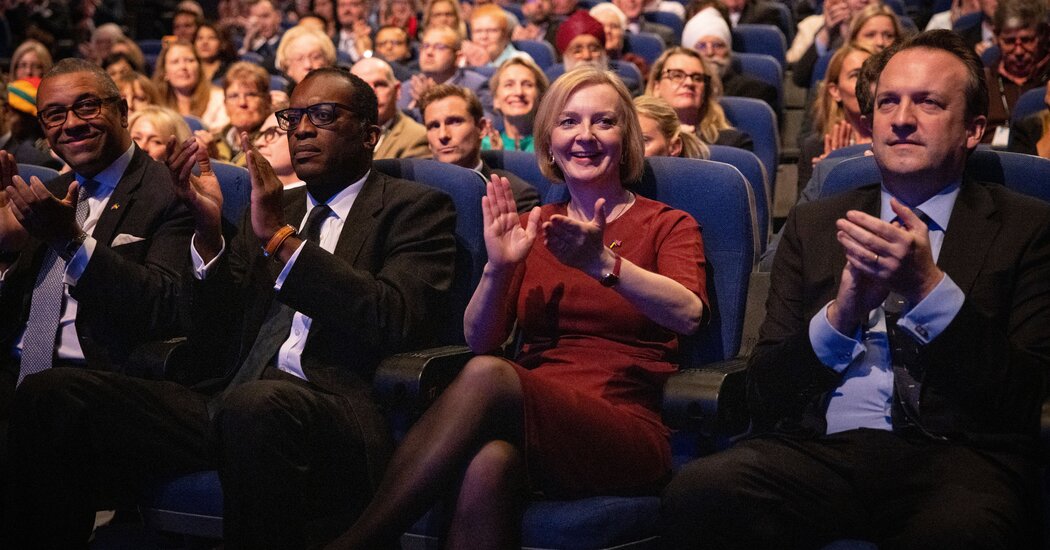 The announcement was a stinging capitulation by the government, a day after Ms. Truss declared that she would go ahead with the tax-cutting plan that had roiled financial markets.

The reversal appeared to be designed to avert a mushrooming rebellion by Conservative members of Parliament. Several had signaled that they would vote against the tax cut, and some senior party members predicted that the government, which has been in office for barely a month, would fail to get the measure through the House of Commons.

“We get it, and we have listened,” Kwasi Kwarteng, the chancellor of the Exchequer, posted on Twitter, hours before he was to address the Conservative Party’s annual conference on Monday.

Later, Mr. Kwarteng told the BBC Radio that the cut in the top tax rate had become a “strong distraction” from the rest of the government’s economic package. He said that he had raised the idea of reversing course with Ms. Truss on Sunday after seeing the “intense focus” of lawmakers on the measure.

The decision will lift one major cloud off Britain’s public finances. The value of the pound plummeted when Mr. Kwarteng unexpectedly announced on Sept. 23 that the government would abolish the income tax rate of 45 percent applied to those earning more than 150,000 pounds, or about $164,000, a year.

Ms. Truss had telegraphed other tax cuts in the government’s package during her campaign for party leader last summer. Those included cuts to the basic rate for lower earners, taxes on house purchases and corporate taxes.

But abolishing the top rate was a surprise, and immediately drew criticism as a giveaway to the wealthy at a time when millions of Britons are dealing with a cost-of-living crisis.

Fears that the government would have to borrow massively to pay for the cuts sent the pound to its lowest level against the dollar since 1985. Other British assets were also pummeled, leading the Bank of England to intervene in the markets last week to shore up British government bonds.

Ms. Truss and Mr. Kwarteng had remained defiant in the face of the market turmoil, arguing that the tax cuts were the centerpiece of a supply-side plan to reignite Britain’s economy.

But on Sunday, Ms. Truss conceded for the first time that the government had not laid the proper groundwork for the tax cuts.

Speaking to the BBC journalist Laura Kuenssberg, Ms. Truss said that the impetus for the abolition of the top tax rate came from Mr. Kwarteng and that it had not been debated by the entire cabinet. That was widely interpreted as an attempt to distance herself from the most divisive element of the economic plan.

Michael Gove, an influential former Tory cabinet minister, criticized the government on Sunday, saying it was “not Conservative” to pass unfunded tax cuts, meaning they would necessitate substantial new borrowing.

The government is already pledging to pay tens of billions of pounds to protect people from surging gas and electricity bills because of the disruptions caused by Russia’s war in Ukraine.

“I think there is an inadequate realization at the top of government about the scale of the change required,” Mr. Gove said to Ms. Kuenssberg. He strongly suggested that he would vote against the measure.

Another former Tory minister, Grant Shapps, said on Sunday that the tax cut was not likely to pass in the House of Commons and he urged Ms. Truss to reverse course. Mr. Shapps, who served as transport minister in the government of Boris Johnson, told the BBC that the government was muddying the water with “tax cuts for wealthy people right now, when the priority needs to be on everyday households.”

The announcement quickly lifted the value of the pound against the dollar and other currencies. It was trading at $1.124 to the dollar on Monday morning, up about 1 percent.

But it leaves Ms. Truss’s month-old government in flux, as Conservative Party members gather in the city of Birmingham for their conference. Cutting taxes was the prime minister’s signature economic proposal; reversing course so quickly on part of her plan will raise doubts about her leadership.

It will also raise questions about the future of Mr. Kwarteng, the chancellor, who pushed for the cut to the top tax rate. He is a close ally of Ms. Truss, both having long championed tax cuts, deregulation, and other free-market policies as ways to lift Britain out of a long stretch of sluggish economic growth.

Speaking to the BBC Breakfast program after the announcement, Mr. Kwarteng said he had no plans to resign.