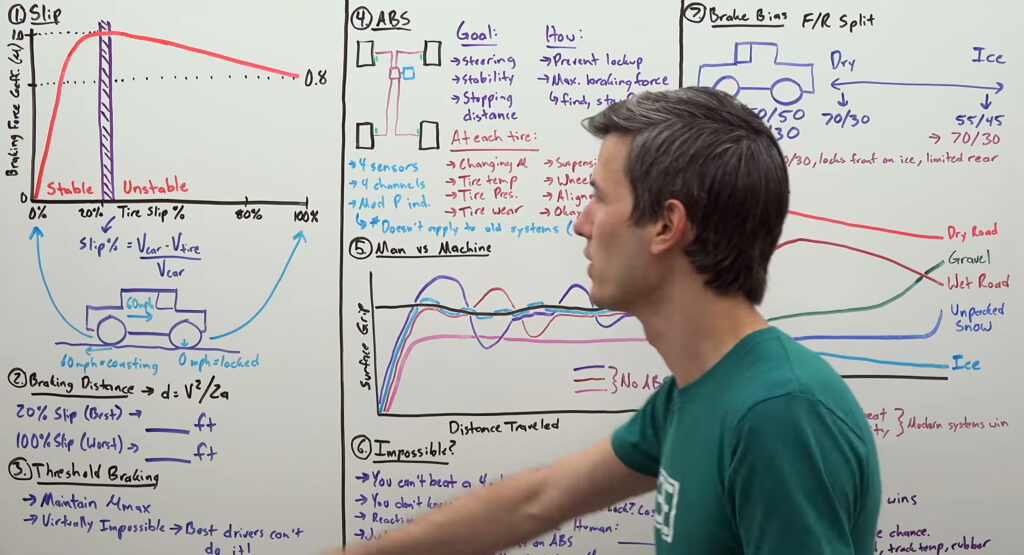 Even as cars continue to become even more technologically advanced, there are some people out there who refuse to believe that anti-lock braking systems (ABS) can do a better job slowing a car down at the limit than threshold braking. Here to put that claim to rest is Engineering Explained’s Jason Fenske, who dives into the science behind ABS and what makes it so effective.

Read More: What Actually Happens When You “Money Shift” With A Manual Transmission

ABS, on the other hand, uses sensors to determine this threshold computationally. When you slam on the brakes, your car will want to lock up the wheels, so to counteract that, ABS modulates brake pressure systematically until it reaches the wheel slip threshold, allowing the driver to maintain control of the car and reduce their stopping distance. On top of that, it’s doing this multiple times in the same amount of time it takes for a person to just react to wheel lockup, let along correct it.

To sum up, the reason ABS is better than threshold braking is simply because human reaction time can’t compete with that of a computer. Even Formula 1 drivers can be seen locking up their wheels under braking at times, and their entire career is based on being the best drivers in the world. Not only that, but ABS is doing its job at each wheel individually, which is something that just isn’t possible for a person to do manually with a single brake pedal.

With all that being said, there’s still a lot more to the comparison than just what we talked about, so for a more thorough explanation on the topic, we recommend checking out Engineering Explained’s video to get the full rundown.