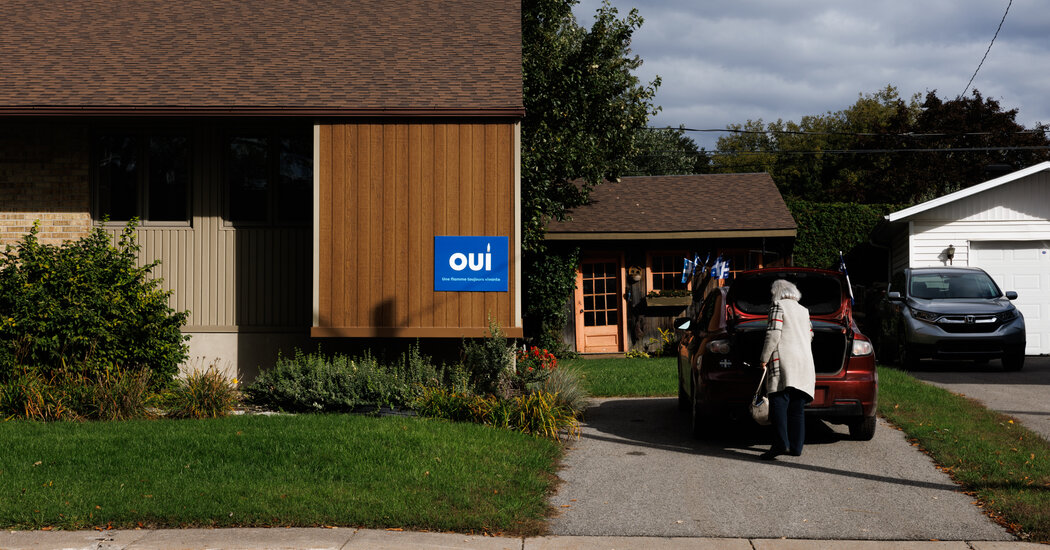 L’ASSOMPTION, Quebec — Residents in the small city of L’Assomption, Quebec, once overwhelmingly backed the province’s bid to break away from Canada in order to establish a French-speaking, independent nation.

On Monday, though, they and much of the rest of the province are expected to strongly back the re-election of their popular premier, who has abandoned calls for independence — and instead has embraced a nationalism based on French Québécois identity.

“It’s a conservative nationalism that recalls the themes of culture, history and memory,” said Jacques Beauchemin, a sociologist and a leading intellectual behind this shift. “It’s a return to the meaning of identity.”

But to critics, this nationalism threatens the cohesion of the increasingly diverse province by taking aim at immigrants, English speakers and other minorities.

In its four years in office, the government of the premier, Francois Legault, has banned the wearing of religious symbols like the Muslim veil in some public areas and has further restricted the use of English. In his campaign for the election, Mr. Legault has doubled down on the issue of immigration, describing it as a threat to Quebec society — a stance at odds with that of the federal government, which is planning to increase immigration sharply over the next few years.

The position is also at odds with the stance of Montreal, the multicultural city where the premier’s popularity is comparatively weak.

“With this electoral strategy, Mr. Legault is deepening the divide between Montreal and the rest of Quebec,’’ said Gérard Bouchard, a historian and sociologist who is a leading intellectual in the province. “The result of this strategy is to marginalize immigrants and ethnic minorities who are concentrated in Montreal.”

A spokesman for Mr. Legault declined a request for an interview.

Mr. Legault’s brand of nationalism departs sharply from the ideology behind the left-leaning secessionist movement, which sought autonomy for the French Québécois majority that felt historically oppressed by an English-speaking minority. That movement identified with progressive liberation movements throughout the world and was backed by young, urban voters in Quebec.

A onetime businessman who co-founded a successful budget airline, Mr. Legault started his political career in the separatist, social democratic Parti Québécois, a group ideologically opposed to the federalist, pro-business Liberal Party. But a decade ago, Mr. Legault altered the political landscape when he founded a new party, Coalition Avenir Québec, which offered a third way. Rejecting secession from Canada, his party blends an identity-based nationalist agenda with pro-business policies.

In places like L’Assomption, and among older French Québécois voters, his ideas have especially caught on.

“He has spoken about the notion of being Québécois, about our pride and culture,’’ said Sébastien Nadeau, the mayor of L’Assomption.

Mr. Legault — who represents the electoral district that includes L’Assomption — also partly owes his popularity to his economic policies, to the paternal figure he assumed during the pandemic and to a divided opposition, said Lisa Maureen Birch, a political scientist at Laval University and an editor of a book on the premier’s first term.

In his campaign, Mr. Legault has had to backpedal several times after making comments that, his critics say, reveal the divisiveness of his nationalism. When Mr. Legault was questioned at a campaign stop about racism and the case of an Indigenous woman who died after filming herself being abused by hospital staff, he accused members of her Atikamekw First Nations community of not wanting to fix problems on the ground but of seeking to revive a pointless debate on systemic racism, which the premier denies exists in Quebec’s institutions.

He later apologized to the woman’s family.

Mr. Legault, who wants Quebec to gain more control from Ottawa over immigration policies, also apologized during the campaign after linking immigration to violence and extremism. And he apologized last week, after his immigration minister falsely said that “80 percent of immigrants go to Montreal, don’t work, don’t speak French and don’t adhere to the values of Quebec society.’’

L’Assomption is a city of 24,000 people, nearly all of French Québécois origin. A river of the same name snakes around the city center, winding its way across a suburban and rural region with towns and roads with names pointing to Quebec’s Roman Catholic heritage.

In the 1995 referendum on independence from Canada, 64 percent of the voters in L’Assomption’s electoral district said yes. In 2018, 57 percent voted for Mr. Legault, with the candidate of the pro-independence Parti Québécois finishing third.

Located about 30 miles northeast of downtown Montreal, L’Assomption has only recently experienced the demographic changes that have affected Montreal for decades, said Mr. Nadeau, the mayor. Immigrants who used to rent in Montreal have started buying houses in the area as they seek more space, he said, adding that L’Assomption’s first ethnic restaurants opened just in recent years.

“Here, 10 years ago, we didn’t have a Haitian cafe or a Portuguese restaurant,” Mr. Nadeau said, adding that the immigrants’ arrival was both a source of inspiration and fear.

On L’Assomption’s main commercial strip — which is called the Boulevard of the Guardian Angel and is lined with shops that give it a village-like feel — Normand Parisien, 68, a retired city employee, said he believed that L’Assomption was representative of a traditional Quebec and its psyche.

“We feel threatened by multiethnicity because we’re a pretty homogeneous society,” said Mr. Parisien, who went to Montreal once a week to attend plays and modern dance performances before the pandemic. “It doesn’t frighten me that much personally. But all of this goes with language and religion; it’s all related. It’s who we are.’’

The Legault government’s passing of the law banning the wearing of religious symbols was a response to this fear, especially of Muslim immigrants, Mr. Parisien said.

Others, like Nicole Robillard, 60, a retired hospital worker, said Mr. Legault was protecting French Québécois against immigrants who are trying to impose their values.

“Why do people come here and try to change our culture? Why do they want to take away our crucifixes?” Ms. Robillard said, referring to the removal of the cross from the provincial legislature in 2019.

Critics say the law targets Muslims and fuels the debate over the place of veiled Muslim women in Quebec society. It embodies the transformation of Quebec nationalism, which saw itself as linked to other global liberation movements, into a reactionary force, said Jean-Pierre Couture, a political scientist at the University of Ottawa.

“It has triggered — in the public debate, on the streets and in the metro — abuses against people who wear religious symbols, and that’s been transformed into votes at the ballot box,” Mr. Couture said. He added that the enemy of Quebec nationalism — American imperialism or an English-speaking Canada in the past — was now the veiled Muslim woman.

Mr. Bouchard, the historian, traces the shift in Quebec nationalism to the separatists’ razor-thin loss in the 1995 referendum. The premier at the time, Jacques Parizeau — who also represented the electoral district of L’Assomption — blamed “money and ethnic votes” for the loss.

Mr. Legault has described increasing immigration as “suicidal” for Quebec’s French identity — rejecting appeals by business leaders worried about the effects of a labor shortage and the province’s low birthrate.

At Assomption-de-la-Sainte-Vierge Church — a Roman Catholic Church attended by aging French Québécois and younger immigrants from South America and the Democratic Republic of Congo — the Rev. Greg Ciszek worried about the effects of this anti-immigrant nationalism on the future of Quebec. It was a change from the Quebec he had come to as a 9-year-old immigrant from Poland, said Father Ciszek, now 41.

“Now immigrants arrive and experience a rejection in part, a devaluation of their dignity,” Father Ciszek said.

“If Quebec society wanted to perpetuate its French Canadian identity,” he said, “all it needed to do was have more children.”