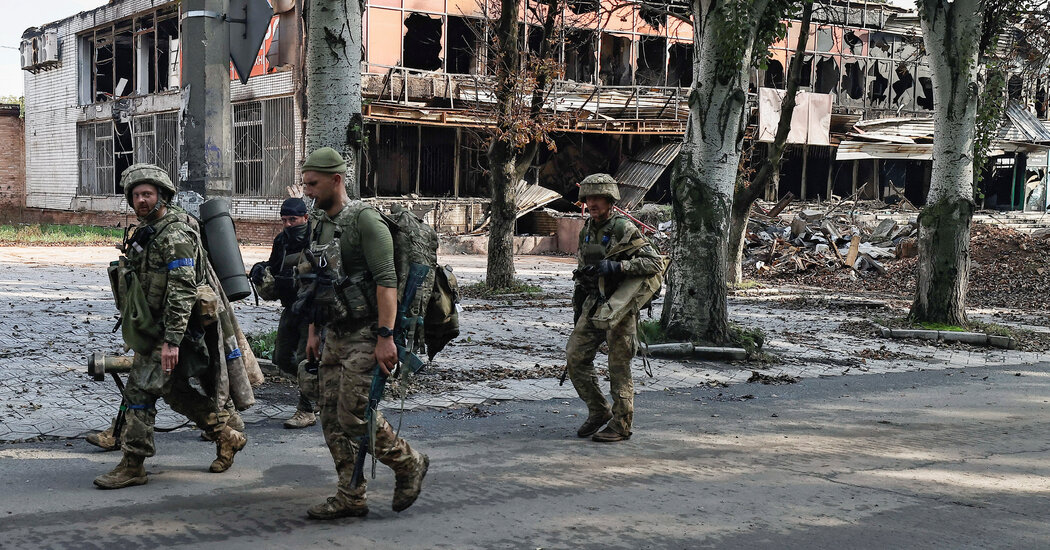 RIVNE, Ukraine — Russian forces retreated from the strategic eastern Ukrainian city of Lyman on Saturday, a humbling setback for President Vladimir V. Putin just one day after he illegally declared the surrounding region to be part of Russia.

The Ukrainians’ assault on Lyman, a rail hub leading into the mineral-rich Donbas region, underscored their resolve to attack in territory Mr. Putin now claims sovereignty over — raising the stakes in a war in which a nuclear-armed Russia has declared it would use “all available means” to defend land it considers its own.

The Russian retreat quickly spawned withering criticism among powerful allies of Mr. Putin, who blamed Russia’s military leaders for the recent losses, calling them incompetent. It was a striking display of internal dissent after Mr. Putin made a show of force in Moscow on Friday, delivering a menacing speech in which he announced the annexation of the swaths of Ukrainian territory, and positioned the war as an existential battle between Russia and Western elites.

The annexation was widely condemned as illegitimate by the United States and its allies. The Biden Administration quickly announced new sanctions as punishment.

Lyman sits on the banks of the meandering Siversky Donets River, which has served as a natural division between Russian and Ukrainian front lines since Russian forces captured the city in May. Retaking it offers Ukrainian forces a strategic foothold for further advances into the Donbas region that has long been the focus of Mr. Putin’s aims.

Lyman’s capture also puts additional pressure on the Kremlin, which has been facing blowback at home over the conscription of hundreds of thousands of men to fight in Ukraine.

The battle for Lyman was fought over weeks, but the fall came suddenly as Russians feared they would be encircled and left. The Ukrainians sent airborne troops in and announced their victory to the world with a video of two grinning soldiers unfurling their country’s blue-and-yellow flag, and then taping it to a sign marking the city limits.

The army “will always have the decisive vote in today’s and any future ‘referendums,’” Ukraine’s Defense Ministry wrote in a tweet, in a pointed reference to Russia’s sham vote for annexation in the Ukrainian territory.

Hours later, Russia’s Ministry of Defense announced it was withdrawing its troops from the city.

“In connection with the creation of a threat of encirclement, the allied troops were withdrawn” from the city to a “more advantageous” location, the Russian ministry said in a statement posted on the messaging app Telegram.

For Russia, the setback came less than 24 hours after Mr. Putin’s speech on Friday — his most harrowing of the war — in which he decried the United States for “Satanism” and the West as “the enemy,” “deceitful and hypocritical through and through.”

The West, he said, had “no moral right” to condemn the annexation of parts of Ukraine, given its own history of brutal colonization, dividing the world “into their vassals — the so-called civilized countries — and everyone else.”

The residents of the four Ukrainian regions — which are still partly controlled by Ukrainian forces — would become Russia’s citizens “forever,” said Mr. Putin, adding that Russia would defend them “with all the forces and means at our disposal.”

And he again raised the specter of using nuclear weapons, noting in a cryptic aside that the atomic bombs the United States dropped on Japan in 1945 had “created a precedent.”

Ukrainian officials have consistently said they will disregard Russia’s territorial claims and press ahead with counter offensives in eastern Ukraine and around the southern port city of Kherson.

The Pentagon’s top official on Saturday praised the Ukrainian military’s breakthrough in Lyman as a major success.

“Absolutely, it’s significant,” said Defense Secretary Lloyd J. Austin III. “We’re very encouraged by what we’re seeing right now. Lyman sits astride the supply lines of the Russians, and they’ve used those routes to push men and materiel down to the south and to the west.”

The fury over the retreat from powerful allies of Mr. Putin added to the chorus of pro-war Russian bloggers criticizing the government’s military leadership.

Ramzan Kadyrov, the strongman leader of the southern Russian republic of Chechnya, wrote on the Telegram messaging app that Russia’s top military brass had “covered for” an “incompetent” general who should now be “sent to the front to wash his shame off with blood.” Mr. Kadyrov said he had told Gen. Valery Gerasimov, the head of the Russian General Staff, that the forces on the Lyman front had been left without sufficient communications and ammunition supplies.

Yevgeny Prigozhin, a business magnate close to Mr. Putin who leads the Wagner Group — an army of mercenaries fighting for Russia in the war — issued a statement an hour later agreeing with Mr. Kadyrov.

“Send all these pieces of garbage barefoot with machine guns straight to the front,” Mr. Prigozhin said, in an apparent reference to Russia’s military leaders.

The open criticism by these influential figures in Russia’s war effort suggested that Mr. Putin would now face even more pressure from the hawks in his inner circle to escalate the war.

Yet, even as Russian forces were losing a battle on the ground, they were unleashing a salvo of rocket, drone and missile strikes from the air.

The most lethal strike landed on Friday in Zaporizhzhia, one of four Ukrainian areas that the Kremlin claimed in its trumped-up annexation. The attack sprayed shrapnel into a line of about 200 civilian cars and minivans packed with luggage and passengers, waiting at a checkpoint and bus stop to cross into Russian-occupied territory to visit relatives or ferry medicine and other humanitarian supplies across the frontline.

Thirty people were killed, including two children, and another 118 people were injured, according to Ivan Fedorov, the mayor of the occupied town of Melitopol. That would make it one of the deadliest single attacks against civilians in recent weeks.

Witnesses described a macabre scene, with dead and injured strewn on the road.

“People were lying on the ground, near their cars or a little away, depending on how far they got, and they were dead,” said Natalia, a woman who had stepped out of her car waiting in line to stretch just as the first explosion rang out.

“I lay on the ground to wait it out,” said Natalia, who asked that her last name not be published out of concern for her safety. The second blast shattered the windows of her car, she said, and about a dozen more followed.

Two of her passengers, a man and a woman, died, and two others were wounded, she said.

“It can be called a terrorist act,” she said. “There was just peaceful population, there are absolutely no military bases or soldiers. It’s where humanitarian aid columns and people depart to cross the frontline.”

President Volodymyr Zelensky of Ukraine condemned the strike also, as did Bridget Brink, the U.S. ambassador to Ukraine.

Also on Friday, rockets and Iranian-made kamikaze drones that Russia’s military recently acquired hit residential neighborhoods in the southern Ukrainian city of Mykolaiv, killing at least three people and wounding 19, the regional governor said A missile strike on a bus parking lot in the city of Dnipro also killed one person and ignited a fire that burned 52 buses.

On Saturday, Ukrainian officials revealed that another Russian massacre of Ukrainian civilians had taken place the previous week, when Russian soldiers fired at close range at a convoy heading toward the recently liberated city of Kupiansk in Kharkiv Province.

Ukraine’s recapture of Lyman put the battle for the Donbas region into a new phase, leaving Russia’s control of the area uncertain as the Ukrainians are now positioned to claw back territory before winter sets in.

The Ukrainian advance was a continuation of the army’s northeastern offensive, which routed Russian forces from dozens of villages and recaptured more than a thousand square miles in the Kharkiv region last month.

In recent days and weeks, Ukrainian forces also closed in from the south and west.

The next target, if the Ukrainian military continues its advance, would likely be Svatove, a city northeast of Lyman where Russians have retrenched after their defeat in the northeast, according to analysts.

Russia’s military in the Donbas, depleted and losing ground, could be faced with two options: shuttling resources from other parts of the front to slow Ukraine’s advance, or continuing to slowly lose chunks of the region.

Ukraine’s slow-moving offensive in the south, toward the port city of Kherson, has largely been overshadowed by events in the east. But fighting there remains fierce, as better-trained Russian forces have put up staunch resistance against advancing Ukrainian troops.