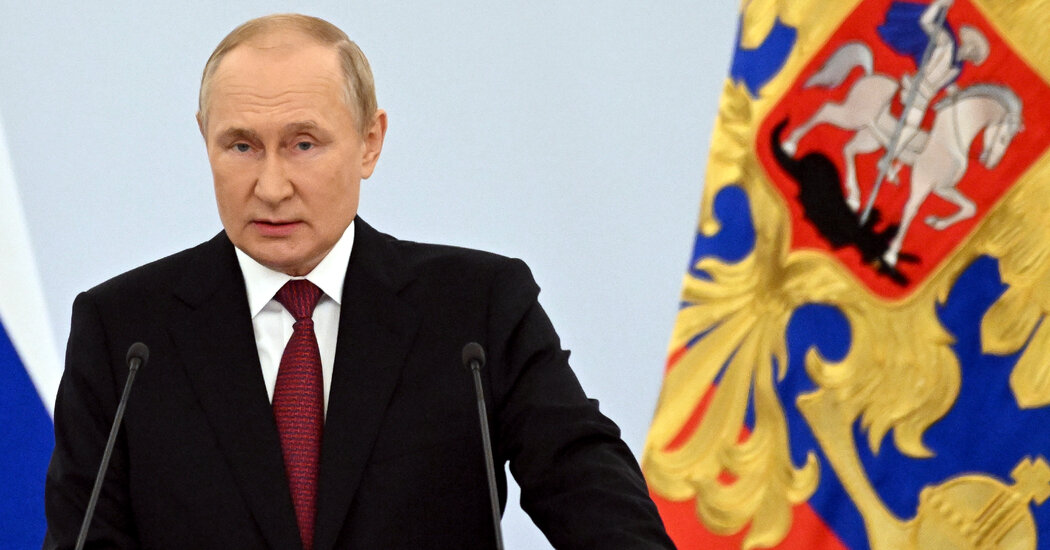 Vladimir Putin’s speech on Friday, in which he formally proclaimed the annexation of four Ukrainian regions, was many things: a distorted history lecture, a rather tedious enumeration of supposed Western sins, an airing of grievances and a vaunting of power. For all the rhetorical flourish — accusing Western elites of “Satanism,” for example — it was in many ways a typical address from Mr. Putin.

But it was also something else: a plan. Amid the bluster and veiled threats, the president made three distinct points that, taken together, form a blueprint for war and peace.

First, Mr. Putin claimed in his speech that this week’s explosions at the Nord Stream gas pipelines were the work of the United States. In one move, that frees Russia from having to excuse its failure — now or in the future — to deliver gas supplies by that route. That, alone, is a victory. But this accusation also hinted that Russia may now be entitled to respond in kind, in effect threatening Western pipelines with sabotage. The weaponizing of energy supplies could take on a new dimension: not only reducing supplies from Russia, but also actively hindering the delivery of energy from other places.

Second, Mr. Putin suggested that talks for ending the war should begin immediately. He appealed to Ukraine to cease hostilities, withdraw its troops from the new “Russian” territories and sit down at the negotiating table.

The same type of ultimatum was issued on the eve of Russia’s invasion of Ukraine. On Feb. 21, Mr. Putin formally recognized the so-called Donetsk and Luhansk “people’s republics.” After clarifying that he meant the entire regions, not just the areas controlled by the separatists, he then demanded that the Ukrainian army withdraw from both. Within a few days, he launched his invasion.

There is a difference between the state of affairs now and the situation in the spring, when everyone was reeling from the invasion of the world’s second largest army into a sovereign state. Mr. Putin’s latest threat comes after a humiliating retreat from the Kharkiv region. It was this military setback that pushed Russia to announce both the mobilization and the annexation, and it seems highly unlikely that the Ukrainians will consider Russia’s request for talks seriously this time around. On the contrary, Ukraine has repeatedly said that annexation would mean an end to any attempt at negotiations with Mr. Putin’s Russia. For Ukrainians, after what happened this week, even sitting down at the negotiating table would amount to surrender.

This leads us to Mr. Putin’s third point: that the United States “created a precedent” for the use of nuclear weapons with its bombing of Hiroshima and Nagasaki in 1945. It’s not hard to work out the implication. If the West continues to send weapons to Ukraine and refuses to put pressure on Kyiv to agree to a solution that would satisfy Russia, Mr. Putin may resort to the nuclear option.

There is one clear explanation as to why the use of a nuclear weapon, or even talking about it, is a great temptation for Mr. Putin and for those who share his views about Russia’s standing in the world. Equality is understood by them in a very blunt, practically arithmetical way. To be equal to the United States, Russia must show that it can do anything the Americans can, regardless of when the Americans did it or what the context was.

This symmetrical concept of equality and an almost superstitious idea of global justice are pushing Mr. Putin and some people around him to go for the nuclear option — especially since the prospect of Russia winning a conventional war is uncertain, if not improbable, and the Kremlin doesn’t recognize any exit strategy that cannot be passed off as some sort of victory.

This conflict is increasingly presented as existential for Russia. Mr. Putin and many Russian commentators want to convince the outside world that they are serious. Their argument is: “Many didn’t believe we were going to invade Ukraine or annex more of its territory, but we did. Now you don’t believe that we are going to use nuclear weapons, but we are not bluffing.”

This is Mr. Putin’s message, and the mood in the Russian elite is noticeably gloomy and fatalistic. There is, however, one significant difference between the Russian invasion of Ukraine and threats to resort to nuclear weapons. Before the invasion, Russia fiercely denied having any intention of invading. Now it’s doing the opposite.