MANCHESTER UNITED want to sign Jude Bellingham AND Frenkie de Jong in the summer, according to reports.

The Red Devils are not planning a major overhaul of their squad in January, with Erik ten Hag set to wait until the end of the season.

But he will then look to bring in exciting talent – and ESPN understand De Jong and Bellingham are at the top of his wishlist.

Man Utd were linked with De Jong all summer, with Ten Hag keen to reunite with the Dutch international he brought through at Ajax.

But a deal never materialised and he ended up staying at Barcelona.

Meanwhile, Bellingham committed to Borussia Dortmund for one more season but is set to leave in the summer. 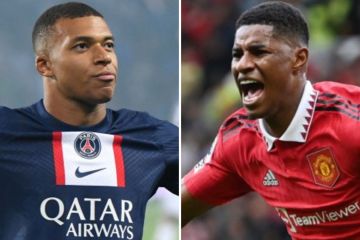 The 19-year-old is one of the most highly-rated teenagers in world football.

As a result, he has attracted interest from Europe’s biggest clubs, with Manchester City, Liverpool, Chelsea and Real Madrid all thought to be keen to acquire his services.

However, Man Utd are hopeful they can beat off all the competition and bring him to Old Trafford.

Bellingham has been superb since joining Dortmund and showed that world class talent on the international stage for England in their 3-3 draw with Germany on Monday.

United boss Ten Hag will believe De Jong and Bellingham can help bring the team closer to his desired style of play.

The Red Devils boss lost his first two games in charge against Brighton and Brentford.

He then switched to a more pragmatic approach and has enjoyed a four-match winning streak in the Premier League.

But the Dutchman will still be keen to move towards a possession-based style in the future, with Bellingham and De Jong the type of midfielders which can thrive in that type of system.