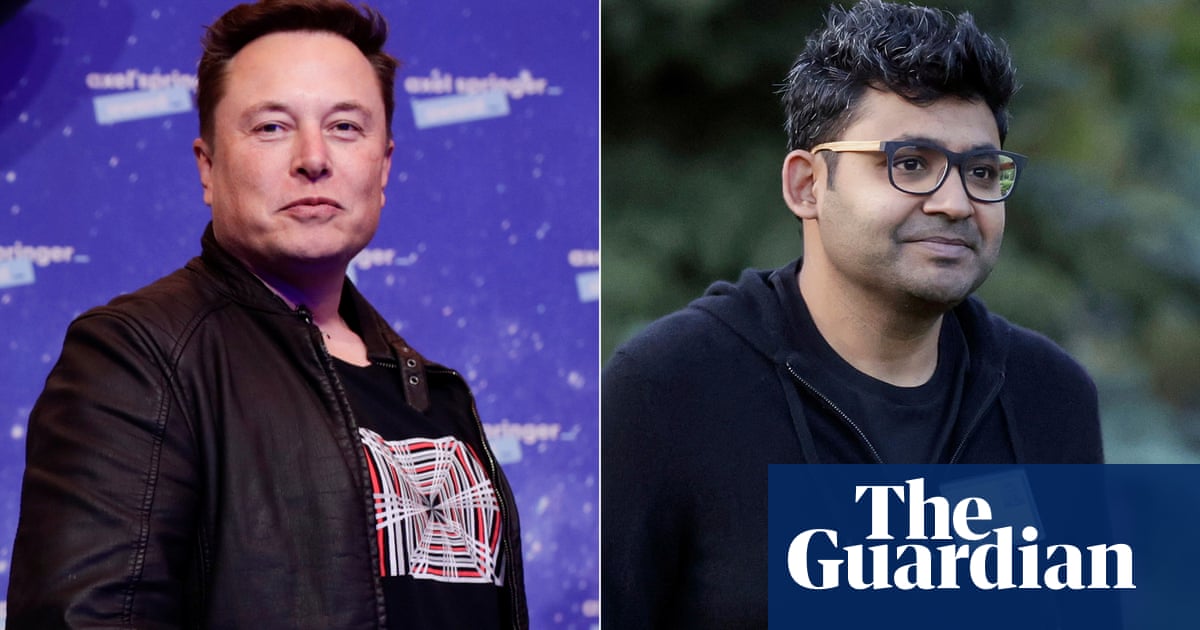 Newly published messages between Elon Musk and the Twitter boss, Parag Agrawal, show how their relationship appeared to be blossoming before it dramatically soured, with the billionaire Tesla CEO tweeting: “Is Twitter dying?”

The series of text messages, disclosed in a Delaware court filing, suggest the two men were for a short period bonding, including over their shared love of engineering, after Agrawal got in touch with him, weeks before Musk announced his offer to buy Twitter.

The communications offer an insight into the careful negotiations that were privately taking place. At the time, the billionaire had invested in shares in the social media company and was suggesting ideas for its improvement – or proposing starting his own social network – in public.

It comes ahead of a high-stakes trial, starting on 17 October, which will decide whether the world’s richest man will have to complete the $44bn acquisition of the social media company he has agreed to. Musk could be deposed as soon as next week.

A message to Musk from Bret Taylor, the chair of Twitter’s board, said the proposed location at an Airbnb near the airport, which he said was home to tractors and donkeys, was “the weirdest place I’ve had a meeting recently”.

Afterwards, Agrawal said the dinner was “memorable for multiple reasons”, adding that he “really enjoyed it”.

When, a few days later, it was announced that Musk would join the board, Agrawal said he was “super excited”.

When the news of the Tesla CEO joining the board became public, Musk received messages from figures including the podcaster Joe Rogan, who asked whether he would “liberate Twitter from the censorship happy mob”.

“I will provide advice, which they may or may not choose to follow,” Musk responded.

On 5 April, Jack Dorsey, Twitter’s former chief executive, described Agrawal as an “incredible engineer” to Musk, but claimed the company’s board was “terrible”.

Two days later, Agrawal and Musk appeared to be getting on well, planning their working relationship.

“I wrote heavy duty software for 20 years,” Musk wrote. “I interface way better with engineers who are able to do the hardcore programming than with program manager/MBA types.”

Agrawal responded: “In our next convo – treat me like an engineer instead of a CEO and let’s see where we get to.”

On the same day, Musk texted Agrawal saying that he had a “ton of ideas” but to let him know if he was “pushing too hard”. He added: “I just want Twitter to be maximum amazing.”

But two days later, on 9 April, came Musk’s fateful tweet – in which he publicly suggested the platform was floundering – souring their apparently developing relations.

Agrawal reportedly questioned Musk about his public criticism of Twitter in the texts and described his comments as unhelpful and an “internal distraction”.

“What did you get done this week?” Musk replied less than one minute later. “I’m not joining the board. This is a waste of time. Will make an offer to take Twitter private.”

On 11 April, Agrawal announced that Musk would not be joining the board. And three days after that, Twitter revealed that Musk had offered to buy the company for about $44bn – a deal that Twitter agreed to on 25 April.